Fast. Play when you draw a non-weakness treachery card.

Place 1 of your clues on your location. Then, cancel that card's revelation effect.

Knowing is half the battle.
Mark Molnar
The Unspeakable Oath #150. 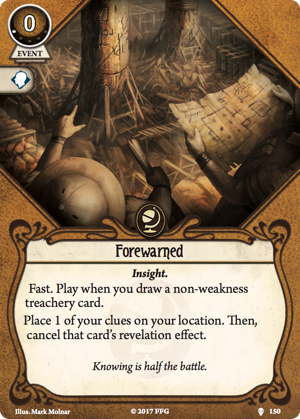 Cancelling nasty treacheries is extremely powerful, especially for free, and especially especially when the only consequence is you having to a bit more of something you're probably specifically built around doing. Hell, if you're running Milan Money or similar incentives to investigate, you might even "break even" in terms of the action cost of putting down the clue.

It strikes me as particularly good for Joe Diamond in the main deck, as his big weakness is treacheries.

Wow what a great card for seekers. The drawback is small(let's say it cost you 1 action to investigate).Even Roland can make a great use of it since he can add clues while slaying some monsters.

Like ward of protection and test of Will this card is an auto-include to avoid the terrible things that Mythos offers you and most of times punishes you.

Uncle George the Farmer · 5234
This would be good combo with Roland’s special gun while he is engaged in a location with no clue. Or like you said, just engaged and about to murder the enemy and auto regain that clue anyway. — Euruzilys · 10 5/18/18
Or good for core Roland for dealing with his signature weakness. Being able to put clues back is actually really important for dealing with that weakness since it can really hose you if you draw it late. — dr00 · 5 6/7/18
It's also good for Roland to deal with treacheries like Rotting Remains that can almost one-shot you. In short, it's amazing for Roland. — SGPrometheus · 224 6/8/18
About Roland and Cover Up: since Cover Up (as a weakness) is considered an encounter card, Forewarned can cancel the card's revelation effect. Does this really mean that you don't put Cover Up in your threat area, and keep it in your hand until some effect can discard it? — Iluvatar · 1 10/30/18
"non-weakness treachery card" — Chitinid · 13 11/11/18
Can you use this if you have no clues? It doesn't seem like it's written as a cost, but perhaps it is? — PickleTheHutt · 1 11/16/18
Oops, nevermind. This is the pre-then, post-then rule. The portion before then must be resolved in full. Annoying when rules ignore standard rules of logical structure. — PickleTheHutt · 1 11/16/18