Revelation - Attach Searching for Izzie to the location farthest from you.

: Investigate. If you succeed, instead of discovering clues, discard Searching for Izzie.

Forced - When the game ends, if Searching for Izzie is in play: Jenny Barnes suffers 1 mental trauma. 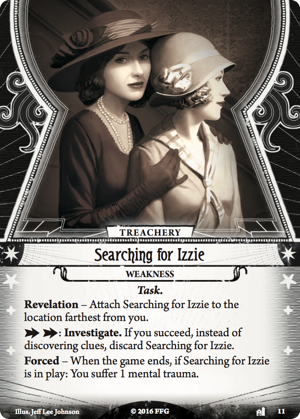 This is possibly one of the worst weaknesses in the game.

The only real positive for this card is that it is 'effectively blank' in the final scenario (assuming you are not on 6 mental trauma already) which is right when you want to ignore it most. That is a fairly good upside actually.

So it's swingy, but even on a good day it's pretty darn bad. I'd say equivalent or right behind Cover Up in terms of severity for many of the same reasons (CU being usually much easier to handle, but mental trauma being a much bigger problem for Roland)

Nearly all Jenny decks will want two copies of Elusive at all times to mitigate this card.

Difrakt · 1146
I pretty much agree with the above. This, combined with the fact that Jenny's Twin .45s isn't the best weapon, usually means that I'll take her replacement cards every time. — cb42 · 32 12/24/18
Can Ursula use her special move + free investigate to attempt to clear this weakness? Or does it always take 2 actions? Or would it only take 1 action? — Cro · 13 5/13/19
Ursula would have to spend an extra action after moving to search for Izzie, so the move and search would be two actions total. — Ruskettle · 1 6/1/19
What if its attached to la bella luna and is discarded? treachery go to discard too? — toriano · 3 6/11/19
@toriano: I think so. This is what I determined in my playthrough. — Shiresan · 1 8/7/19
Though, if you think about it in terms of fluff: "Jenny thinks her sister might have been in the location that got utterly destroyed by a monster", you could easily say you'd get the trauma there. I'm pretty sure the rules support discarding it along with "La Bella Luna". — AukeRosier · 71 11/26/19
1

This weakness might seem worst. However, if you don't apply taboo list, this weakness may be thinkful. Why? Jenny could earn lots of resources and cards with the combo of Double or Nothing + "Watch this!" +All In. In that case, your deck tempo is very very fast, and you should meet your weakness oftenly. But, this weakness is attached in somewhere so that you don't need to consider while attached. This weakness need to be resolved just before the game ends. Well Connected or Streetwise is good for this.

elkeinkrad · 311
This is easily one of the worst weaknesses in solo- it often just becomes mental trauma. — StyxTBeuford · 12699 6/2/21
The problem isn't necessarily that Jenny can't beat the Investigate (though sometimes she indeed can't, especially in Scenario 1 or 2), but that it requires a ridiculous amount of actions to deal with. Most of the time this is going to be a 5+ action cost weakness, with a mental trauma attached if you ignore it. That's pretty painful. Personally I don't think the double action cost for the Investigate was needed. Nonetheless the silver lining is that this doesn't cause immediate damage to your board state (besides missing a draw from drawing the weakness), so it usually won't lead into any kind of death snowball where you get locked down by treacheries/enemies/weaknesses for several turns. And in that respect the high action cost is fair, since it is one of the few weaknesses that doesn't immediately sting. — Soul_Turtle · 1 6/2/21
Yehah I fully agree. It's often just not worth it, especially if it gets pulled late scenario. In solo, I pretty much always eat this card unless the map is small. — StyxTBeuford · 12699 6/3/21
1

Another bad, trauma-inducing weakness. Looking at the two elements, the effect and the discard condition, we get:

The effect: This Weakness has many of the same issues as Roland's Cover Up, although Jenny has a greater capacity for mental trauma, so a bad draw at the end of a scenario isn't quite as deadly. On the other hand, while Jenny's Weakness can always be resolved if you can get to it (no clue shenanigans), it does appear on the furthest location, which can be very bad in large or unusually-shaped maps, plus it goes into her discard pile when resolved for extra drawing possibilities. Any investigator can trigger this, although the and an Investigate test is a tougher nut to crack and more vulnerable to a bad location choice. Missing the test on Searching for Izzie effectively costs you an extra turn. Searching for Izzy can cost Jenny 2 Trauma if she gets defeated while it is out, adding injury to more injury. Since it's attached to a location, if the scenario discards locations, the Weakness will also get discarded, so that's nice. There are not many specific mitigating strategies besides making sure someone can pass that Investigate test and movement boosts like Nimble or Elusive (and maybe "I'm outta here!" to get back to a Resign point).

The discard condition: Get to the location, spend two actions, and succeed on an Investigate test.

Taking everything together, this is a way above average signature weakness, being very action intensive and subject to timing. It might be a little easier in higher player counts. It can end a campaign.

Box vs book Between the two signature weaknesses, the "book" set has an advantage (especially in solo), while the assets are about the same, although they do pretty different things. Players might well prefer the "book" to the "box," and who would want both?