Fast. Play after a phase begins.

Choose a non-Elite enemy at your location. Treat the chosen enemy's printed text box as if it were blank (except for Traits) until the end of the phase. 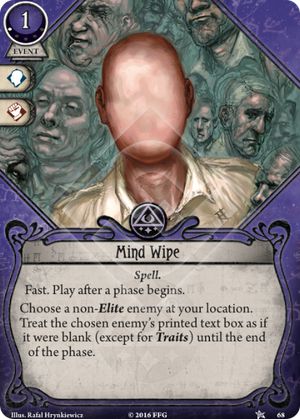 With Undimensioned and Unseen, we might have seen the first real target for Mind Wipe. And man is it a big one. Spoilers ahead:

Taking down a Brood of Yog-Sothoth is no easy task. First, you need to find the Esoteric Formula before you can even attack it. Then, you are faced with making a combat check against 6 to damage it - made easier by clues you can put on it, but 6 is nevertheless the highest combat we've seen on an enemy thus far. Even if you succeed, you only deal one damage to it, whereas it has 2-5 health depending on how many investigators you are playing with.

Or, you can skip all that and play Mind Wipe. Better yet, since you are probably playing Agnes Baker anyway and have Forbidden Knowledge, immediately follow up with taking 1 horror using Forbidden Knowledge and kill a house sized invisible monstrosity without breaking a sweat.

Oh, but you don't get its Victory I. But I think that's a fair price to pay for the amount of effort you save.

sgtmook · 952
Actually you cant use the Agnes Ability and deal a damage to the Brood by taking a horror from Forbidden Knowledge as all damages have to result from the Esoteric formula ann not other sources. — Notturno · 26 5/30/17
@Notturno I am sorry, but the part with the formula is blanked! All that is left are the traits "Monster. Abomination." — Synisill · 276 5/30/17
This works, it's true, but it must be said that the Brood is put in the encounter discard if you kill it this way, NOT the Victory display. When you kill it with Mind Wipe, its text box is blank, which also removes the Victory points from the enemy. It won't have victory points again until it hits the discard pile, at which point they won't matter. — SGPrometheus · 189 6/15/18
And actaully, you can kill a Brood of Yog Shothoth with 1 damage on him since the mind wipe wipes the health added by investigator present. — NotSure · 6 9/21/18
4
Django · 2383
0

Somehow I do not see any scenario with use for this core card unfortunately :( There are always MUCH more better cards for mystic. Do you use this card in your decks? When and for which monsters is it helpful?

Sarseth · 1
I thought this card was pretty versatile. It all depends on the situation you're in. You can stop enemies from advancing doom (for example Silver Twilight Acolyte, Wizard of the Order). You could stop monsters from getting an attack of opportunity (for example Goat Spawn, Mobster, Thrall). Or something not so common, like stopping the Conglomeration of Spheres from eating your melee weapons. — mystery · 1 4/5/17