Spend 1 ammo: Fight. You get +2 for this attack. This attack deals +1 damage.

"...Say, are those Mr. Donohue's guns?" Jenny held a pistol over her shoulder and struck a pose. "I think they suit me better than him. Don't you agree?"
John Pacer
The Dunwich Legacy #10. 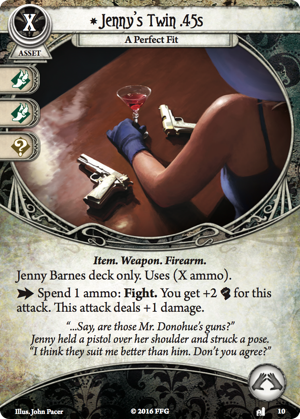 Really? No reviews after all these years? Well, let's compare to the .45 Automatic.

The Con is pretty bad, since Jenny likes her hand slots (Lockpicks, anyone?). I suspect that the dream of pouring 10+ resources into this and never having to find another weapon is a bit of a trap, and the flexibility is more useful in the moment they are played, looking at the quantity and strength of the enemies available at that moment and deciding on expenditure based on that. However, I also suspect that there are other styles of play. Overall, this is a decent weapon, but not a fantastic one, and has a fair number of guns to meet all tastes, so Jenny can definitely get by without this. It's paired with a pretty bad weakness, so are the pistols worth the cost?

It's hard to compare the two signature assets, since they do such different things, but they seem at about the same level. For the signature weaknesses, the "box" is definitely worse than the "book," so the "book" signature set is probably a little kinder, and no one will want both.