Revelation - Put Rex's Curse into play in your threat area.

Forced - When you would succeed at a skill test: Return the revealed chaos token to the bag and reveal a new chaos token. If this effect causes you to fail the test, shuffle Rex's Curse into your deck. (Limit once per test.) 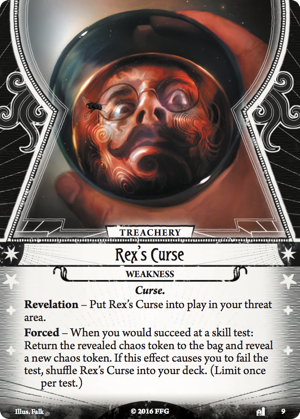 Not a review but to clarify rules on this tricky card: when you return the token, its effets are not canceled, but its modifier is. So you apply the modifier of the second token, but the effects of both.

jd90 · 11
This is a tricky one... According to skill test timing, ST.3 is Reveal a chaos token, ST.4 is apply chaos token symbol effect, and ST.6 is Determine success/failure. According to this, when Rex's curses triggers as you are about to succeed a test, you have already been through ST.4 once and must now return to ST.3 and go through all the following steps again. In other words, symbols with a direct effect will have two chances to be drawn and triggered For example, in the scenario The Gathering, if you reveal a Broken Tablet and a Ghoul is at your location, you would take 1 damage in ST.4, then (if you succeed) Rex's curse would pull you back at ST.3 and you could draw a Broken Tablet again for a second damage! - - - Though a question still stands for me: what happens if you draw several chaos tokens (e.g. revealing a Cultist Token on hard in The Gathering prompts you to reveal another chaos token). In this case, what chaos token should you return to the bag? I'd say that you should return the last revealed chaos token, and hence you would still sit with that cultist token on the board and the possibility of taking 2 horrors on failure, but that's my guess. Also, situation may get complicated when you reveal multiple chaos token at the same time and not one after another. — Alleria · 53 7/5/19
A recent FAQ entry regarding multiple chaos tokens being revealed due to Olive McBride, states that even if a card mention "chaos token" in the singular form its effect extends to all the chaos tokens revealed. Following the same logic I think Rex's curse would make you return all chaos tokens revealed if you would succeed, and not just the last one. — Killbray · 1 11/12/19