Revelation - Put Kleptomania into play in your play area.

: Take control of an Item asset or 2 resources from another investigator at your location. Then, shuffle Kleptomania into your deck.

Forced - At the end of your turn: Take 1 horror. 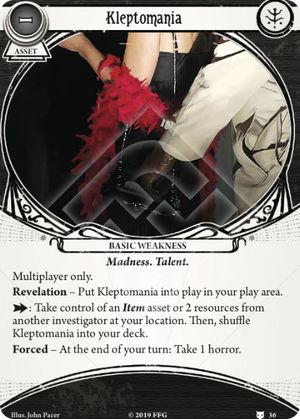 I love the design of this card. All the new basic weaknesses are great actually, I can't wait to play them. This is genius though. Arguably it's not even a weakness. Imagine having this in a group that includes Preston or Jenny. You can turn it into a resource engine. At the same time it opens up some serious grief tech combinations along with "You owe me one!", "You handle this one!" etc, if you want to have fun screwing over your friends. Probably not recommended, but it's great that this exists.

Sassenach · 135
Our Sefina Rousseau whose already got two of Another Day, Another Dollar drew this late in our campaign. The rich get richer. — StyxTBeuford · 12387 9/30/19
As its a weakness and thus a treachery card, I can use the action to steal from the kleptomaniac and shuffle the weakness into his deck? — Kael_Hate · 1 1/18/20
This is not a treachery, it's an asset. It's also not in the threat area, but in the play area. Those are 2 reasons why no one else can use it (unlike most other weaknesses that require actions to discard). — neescher · 230 2/17/20
I mean, real talk, this is an annoying weakness because it potentially deals you horror every turn, and gets shuffled back into your deck if you get rid of it, but it definitely has some good janky applications. Ursula can finally get those Track Shoes or Lockpicks that she's always wanted, Wendy can steal a Magnifying Glass, Agnes can get her hands on some Rogue Booze, the list goes on. — Zinjanthropus · 159 5/29/20
2

What’s up with the card art. Looks like a photo of some cosplayers. I also saw this in the Arkham Horror Third Edition’s latest explanation set. In my opinion the art for this card breaks the immersion. Anyone else agree?

how will it work with Charon's Obol? Who will get the additional exp？ I guess the owner will.Because u should get Charon back when the game ends,and Charon give the owner exp during the resolution of a scenario. Or the thief will get?That's very interesting.

shuiping · 2
Charon's Obol is a permanent so I'm pretty sure it can't be stolen. — Sassenach · 135 10/6/19
A card with the permanent keyword cannot be discarded by any means. — shuiping · 2 10/6/19
Looking at the rules entry for permanent, it says permanent cards can't be discarded, shuffled into investigators' decks or used to pay for effects involving cards being returned to hand or shuffled into decks, but doesn't say anything about moving control between investigators without discarding it. So , rules as written, I'd say it can be moved by both this card and teamwork. As far as the effects of the obol go, the timing point is "during the resolution of a scenario" so it should be back in the deck of its original controller by then and the effects should apply to them. Oddly enough , it seems to me that for the second effect the wording is "if you were defeated during that scenario" so I think it also happens while earning EXP and so would also apply to the original controller. In other words the only effect of stealing the Obol would be satisfying your Kleptomania. That's just my reading though and it might be one for the FAQ, maybe? — bee123 · 24 10/6/19
Where in the rules reference does it say that cards will be back in their decks during resolution? If that was true, Delve Too Deep would be worthless. I vote that the effect of the Obol is on whoever controls it at the end. — Death by Chocolate · 640 10/7/19
Considering that Matt rules that in case two players have an obol only one can put it into play and only that one will get the benefit and consequences, I think it's pretty safe to conclude that you don't get those for owning the card but for having it in play when the scenario ends. Thus if someone steals the obol he gets the benefit, or the negative consequences. — Killbray · 54 1/12/20
If I remember correctly, you don't get bonus XP from Obol in City of Archives, because you don't have access to your unique items in that scenario. That too would suggest that stealing the Obol will give you (as in, the person who steals Obol), the extra exp — neescher · 230 2/17/20