Exhaust Mauser C96 and spend 1 ammo: Fight. You get +1 and deal +1 damage for this attack. If you succeed by 2 or more, either ready Mauser C96 or gain 1 resource. 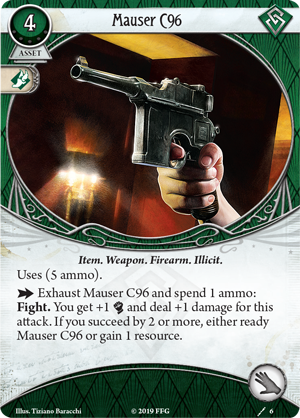 For 4 resources, you get 5 attacks at +1 for two damage. As a baseline, this is better than the .45 Automatic, though with two notable caveats: 's have more baseline fight and therefore don't need as much of a combat boost, and you can't unload round after round into an enemy unless you succeed so well that you would've succeeded by 1 without the Mauser's boost (or, if you do over-succeed and don't need to fight, just gain a small refund of its cost).

The best level 0 weapon in the class up until now is the .41 Derringer, and that card makes the damage conditional on whether or not you needed its boost, which is a way worse risk, so the one thing that makes the Derringer possibly more attractive is the higher boost to fight tests. Rogues almost all have a combat score of 3 (Sef has 2, Preston has 1 and can't take illicit guns anyway, Tony has 5), so a +2 boost instead of +1 is not irrelevant. The key then is to slot this gun in people who want to test really high in their fights. Right now there's two standouts for this: Tony Morgan (who often uses his 5 to profit off of Lucky Cigarette Case and other triggers) and Winifred Habbamock (whose card draw is unmatched in her faction and is geared towards "Succeed by" skill cards as a result). With modest boosting from Delilah O'Rourke or out of faction boosts like Ace of Swords, "Skids" O'Toole could also be quite capable with this weapon. With High Roller almost any Rogue could do it, but especially Jenny Barnes is capable here, especially if she's Well Connected. The resource refund is also not irrelevant to any big money strategy, and I should once again point out the synergy here with Delilah O'Rourke. I'll even shout out Leo Anderson who could easily run this as a net cheaper .45 Automatic and dual wield this with a reliable melee weapon like Enchanted Blade or Machete.

This weapon is a game changer for Rogues. Before it, the Rogue role of "flex" was rather questionable, as they had a notable disadvantage to Guardians as simply being unable to reliably churn out the requisite damage integers (really, 2 per attack is the baseline for a decent fighter). It has, along with some recent Rogue cards (like Delilah), really fleshed out that potential role. And while I'm beyond excited for all the goodies in Winifred's pack, and particularly for Winifred herself, I'm mostly just happy that our boy Tony finally has four weapons worth running at level 0- pay your respects to Kukri now.

StyxTBeuford · 12725
Our boy Tony had no problem running knuckledusters as weapons 5&6 in his deck. Having two good signature guns helped a lot too. That said, I think the Mauser looks good for him, especially in tandem with his personal guns. He can shoot as many times as his tokens allow with the Mauser, and finish off with his personal favorites. — Death by Chocolate · 1164 8/29/20
2

TL:DR. A main weapon for characters that have high as well as high .

If you do the math then Mauser C96 is obviously "better" than comparable one-handed weapons, perhaps even the Enchanted Blade, but its downside relegates it to a niche that's actually pretty cool.

When you start upgrading then Delilah O'Rourke is a natural combo that both strengthens Mauser and mitigates its weaknesses.

Tsuruki23 · 2255
I'd also say that in tony in general it's fantastic because vs upto 4 hp enemies if you succeed you can take the money and fire the longcolt from your other hand to finish off the enemy to get the money on your bounty and replace it. — Tacomental · 18 10/14/21