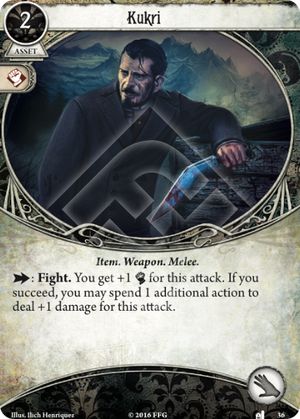 I've been surprised by just how much I enjoy using this weapon. Yes, you heard me correctly, please hear me out! (I promise I'm not completely insane... yet.) While certainly not to be considered action compression, this card will let you get in a "second" attack while avoiding the Chaos bag entirely. This is not that big of a deal when playing on Standard or Easy where you can whiff a few times without much consequence, but as the tokens get nastier and the negative modifiers get larger (and the pile of committed cards grows) I find myself wanting to avoid that bag like the plague. Because sometimes your second attack misses AND a ghoul spawns. And that's just no fun for anyone.

It certainly looks menacing, but is the Kukri any good? I basically never want to attack without dealing additional damage, but at the cost of an additional action it hardly seems efficient. Compared to the only other Neutral Weapon in the game, Knife only costs 1 resource to play, but it does require an additional skill test to achieve the same effect as Kukri. The real cost of that actual skill test will depend heavily on the difficulty of your scenario. Still, I'd give the edge to Knife for it's one-time ability to throw it at the enemy for extra Combat and Damage.

If Knife is better, Kukri could still be considered to be a third or fourth copy of Knife to make sure your investigator never knocks on a door without a melee weapon in hand. But let's consider who would need extra blades. As we'll see shortly, the combat-oriented classes aren't lacking for other options, and even if the other classes are looking for extra damage, Seekers can use "I've got a plan!" and Mystics can use Shrivelling. Both of these are better options and more thematic.

Looking at the game's list of weapons, the Guardian and Rogue both get firearms, and the Survivor gets a Fire Axe. The Machete and Baseball Bat are also quite good, and depending on the purpose of the deck, these cards could be worth the reach out of faction. Finally, the Switchblade is a very interesting card that I doubt can be adequately compared to any of the other weapons because of how situational it's use is. "Skids" O'Toole and Agnes Baker both have a base combat of 3, so the Switchblade would probably need some help to hit most enemies.

In the end, despite the wicked curve of our Himalayan machete, the Kukri seems outclassed by almost all of our other options.

Portmanteur · 6
Quick question: if you Double or Nothing a Kukri attack, do you do double the damage before or after you've spent the extra actions? Ie, can you spend 3 additional actions and deal 8 damage? — clydeiii · 6 3/21/17
The answer from the designers can be found <a href ="https://boardgamegeek.com/article/25401071#25401071">here</a> — CSerpent · 73 3/22/17
Sorry, I have some to learn about editing on this site. Basically, no. Double Or Nothing doesn't double effects per se; it allows to to repeat effects. Using the Kukri has two effects: the standard Fight damage and a bonus point of damage if you spend an action. If you use Double Or Nothing with it, you apply those effects, then you apply them again. So your total damage will be 2 (if you spend no actions), 3 (if you spend one action) or 4 (if you spend two actions). — CSerpent · 73 3/22/17
0

Kukri seems cool. It sounds cool. But it falls in a very narrow window of usefulness. The main strikes against it:

So we're left with support/investigating characters in multiplayer campaigns with 3+ and limited-to-no access to weapons. That list (as of Forgotten Age) is:

Although each of these investigators has other options, of course. But maybe you're a clue-and-evade Jenny who has Lockpicks(1) in one hand and doesn't fight enough to spend xp on Switchblade(2). Or your Akachi has Decorated Skull and you want a way to conserve Shrivelling charges. Maybe your Silas doesn't want the Baseball Bat because of a hand slot or Fire Axe because you don't want to be poor.

Overall, you've got to want to fight juuuust a little bit to use the Kukri - otherwise you should use the Knife for its one-time effect or just run the from bad guys until your slayer shows up.

PureFlight · 514
+2 to +3 Fight would be suffecient to competitive with another weapon. Also it would be great for Tony Morgan, the Bounty Hunter — AquaDrehz · 3 11/13/19