Exhaust Lockpicks: Investigate. Add your value to your skill value for this investigation. If you do not succeed by at least 2, discard Lockpicks. 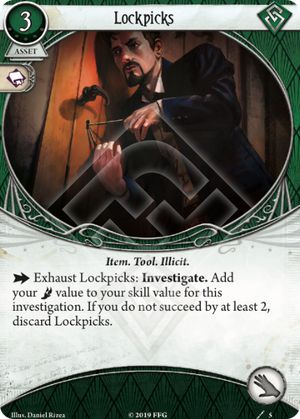 Every investigator who can take Lockpicks (0) can take Lockpicks (1), right? So, sure, these kind of stink, but you'll get to upgrade to the Level 1 one soon enough. Well, not so fast, it's level 0, so there's Versatile and those crazy Dunwich investigators, so let's talk at length about those. Ah, who am I kidding, this review is about Monterey Jack, our lovable Rogue who can take only level 0 Rogue cards, so it's this card or no Lockpicks for you unless you're friends with a traveling salesman.

The effect is strong, as with the level 1 version. You're adding your two highest skills together, for a base 9, always. It'll only get you one clue per turn, which is okay, but you're really adding this to your deck to trigger the succeed-by-two effects, since indeed you must succeed by two. So, trigger your Lucky Cigarette Case to draw some cards, make some money with Gregory Gry, or throw a Quick Thinking at the test to get another action. Or once you get some XP, Deduction (2) solves the "only one clue" problem too, and Perception (2) will run you through your deck to get all of those cool skills back again.

OK, the downside. First, the auto-fail. You don't get your clue, you don't get whatever bonuses you were hoping for, you get nothing and your Lockpicks end up in your discard pile. This is bad, but is that really much different from playing an expensive event that auto-fails on you? You probably got SOME use out of this card, unless you pull the auto-fail on your very first activation, and you're out two actions and 3 resources for nothing. That's Arkham! But remember, the red token only shows up 6% or less of the time!

Now the non-autofail cases where you'll discard the asset: you can fail the test and get nothing or pass the test and get a clue, but in either case you didn't do math properly or are taking a big risk. When deciding whether or not to take Lockpicks (0) , you need to heavily consider the chaos bag and your campaign. The highest regular shroud is 4, and these usually only have 1 clues. 2 and 3 shrouds are far more common. At base 9, being up by 5 means that you're fine if you draw the -3 even on the 4 shroud locations. That's the usual situation for Easy. For Standard, you're likely to have a -4 or -5 in the bag. It's simple enough to commit one of the above skills (don't forget, or icons only) or two to cover the worst tokens. Opportunist lets you cover the spread every single turn. Keep an eye on those tokens, too, which can get nasty in some scenarios. The unpredictability of tokens probably makes them a bad choice if you're worried about losing the Lockpicks. Frost tokens are a problem, too -- the -1 for the first one is probably not a big deal, but the second is an auto-fail, so.

You have two more options to get your stats high enough to succeed which are easily accessible to Monterey Jack. First, add a static boost! Either or work, so we're talking about Hiking Boots or Death • XIII or Gené Beauregard. Or pay some money: Streetwise (0), Higher Education (3), or Hyperawareness (4) are fine choices -- or even Crafty, which pays for the price of Lockpicks, too.

For Monterey Jack, this should not be the only way to get clues in your deck, but it can be an ideal way to make the rest of the deck work well. At base 9, losing the asset is rare, even rarer when you can easily boost your stats. And when it does happen, with Seeker draw you are well on your way to finding your second copy, or reshuffling your deck and getting it back.

dscarpac · 91
At least on standard jack doesn’t really need this. His deck options include enough static boosts and card draw to get to 8 int. Also this is a waste with his 7 extra action, static boosts are much better for those. — Django · 4420 1/5/22
1

For new players, you might think lockpicks (1) is a super amazing upgrade for lockpicks. But actually, level zero lockpicks are a lousy downgrade.

The reason why is because of how the game is structured. Losing assets is terrible. And the law of eventuality says that you’re gonna miss a skill test.

So for three bucks and two actions (one to put out, one to play), you have a chance of losing your lockpicks! You have to be at a +4 vs the skill test to reliably not lose'em. And they're once a turn.

This card solves a problem that doesn’t really exist: needing to get to a +8 to pass a single investigate test in scenario one of a campaign. (Yes, these exhaust after one use, even in the best of cases.) For the same cost, you can get a flashlight, which will give you a +2 and a huge chance of automatic success on shroud one or two locations. You can try it three times, and more if you can reload charges!

Maybe this is to teach new players that leveling up their gear can be very, very useful. So if you’re a new player, please learn that.

MrGoldbee · 1313
"You have to be at a +4 vs the skill test to reliably not lose'em" Well, as it turns out, you will be. Locations with more than 4 shroud are rare, and honestly, risking lockpicks to investigate such a location is worth it? Obviously, don't take lockpicks if you're not one of the many 4 int / 4 agi rogues (or Winifred, who is 3/5), but for those even Lockpicks (0) is much better than flashlight — Thatwasademo · 44 10/22/20
Also, exhausting doesn't mean you only get to use it once, and it's bizarre that you seem to be implying that? Passing one investigate test a turn against a difficult location generally nets you more clues over the course of the scenario than passing three tests in a row against an easy location. — Thatwasademo · 44 10/22/20
I dont understand why you implied this can only be used once a scenario. The point of Lockpicks is to overcome a high shroud location consistently- round after round. Lockpicks basically wont break on anything but autofail if you’re using it correctly, and the cost hurts much less when you happen to be the class whose specialty is resource generation. You absolutely should take Lockpicks 0 if taking it gets your test value up to 7 at least, and especially if you combine it with Lucky Cit Case or any number of fantastic Rogue skills like Quick Thinking. It’s a brilliant card. Definitely worth upgrading though. — StyxTBeuford · 12744 10/22/20
I think Mr. MrGoldbee's reasoning is: Let's sy you are an investigator with a combined Int and Agl of 8, at a shroud 4 location. You pay 3 resources for lockpicks (0). Now, if you get a -2 or better token pull, you get a clue and keep the lockpicks. If you get at -3/4, you get a clue and lose the lockpicks. If you get -5 or lower, you don't get a clue and you lose the lockpicks. So you could reasonably pay 3 resources, draw the auto fail, and listen to the sad violin music. This is not an unreasonable thing to consider, but, if you are playing Rouge, it's a calculation you're going to be making a lot, so eventually you get used to it. Obviously, upgrading to the level one version should be a priority, but, if this gets you a few clues you wouldn't otherwise get, it was well worth spending the three resources. — LivefromBenefitSt · 937 10/22/20
Edited for clarity. — MrGoldbee · 1313 10/23/20
This seems like it would be really useful for Rita Young if you also take Adaptable. — khoshekh · 5 2/2/21
This gets really tricky on higher difficulties. Obviously the autofail is always a concern but if you need to worry about the -6 and -8, too, that's pretty tough to make work. — CaiusDrewart · 2815 4/13/21