During your turn, after you move to a location, exhaust Gené Beauregard: Move a clue or a non-Elite enemy from a connecting location to your location, or vice versa. 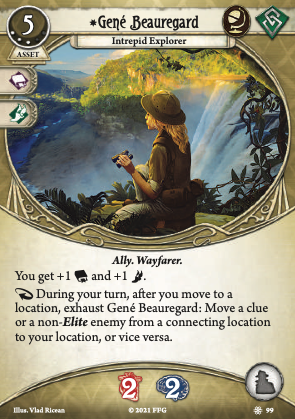 I think Genè is one of the greatest allies this game has seen so far and justly priced at 3 Xp. The one thing holding her back, really, is how expensive she is.

Gene is an upgrade over Milan in a great many decks, especially those that has some sort of synery with Genès abilities to move clues and enemies, such as Ursula Downs, Trish Scarborough and Monterey Jack. The only one left sad here is dethroned Lola Santiago, really. And don't feel too bad for her; Lola will still see actions in decks that prefer her clues-for-cash ability.

Things you can do with Genés ability

Feel free to add more in the comments

olahren · 2337
Another application: Move an enemy onto you if you want to evade it either for Pickpocketing (2) or even just to turn off retaliate. Commit some rogue skills for profit. Probably best in Finn or Trish, as Finn gets a bonus action to evade, and Trish can get bonus clues from an enemy at her location. — Zinjanthropus · 211 9/20/21
You can also move an ennemy to the location in which an other investigation will play Scene of the crime to get 2 testless clues. And maybe use Grete Wagner, Evidence and/or Roland Banks ability to get even more testless clues. — AlexP · 218 9/28/21
There's a _lot_ of situations where moving a clue is as good as discovering one. — Zinjanthropus · 211 10/1/21
So you can move an enemy away and just break an engagement? Or how does that work? — housh · 141 10/14/21
Housh: Yes, I believe you can. Genès card clearly state that you can move non-elite enemies from your location, to a connecting location. And you're only engaged to enemies that share your location. — olahren · 2337 10/20/21
Also use gene to try to engineer more efficient Dynamite Blast plays. Especially nice with Chuck Fergus in Jenny or Skids. — Zinjanthropus · 211 10/31/21
If you have the Hiking Boots from Edge of the Earth you can use Gene to feed clues back into depleted locations, making it easier to earn more free moves in a backtracking scenario. — OrionJA · 1 11/7/21
CON: You have to dress up some idiot in a bear suit with balloons. — profparm · 1 11/19/21
PRO: when someone refers to you as such, you get to say, "Or is it?" And reveal you're gene parmesan, the best. — profparm · 1 11/19/21
I really like the idea of exploring forward and just punting enemies back to the fighters to deal with. Often the fighters waste actions moving to or engaging enemies and you can just move into a space with an enemy and kick them back. Or if you have a way to move avoid AOO, you can just leave them behind. Excited to try it out with Monterey Jack. — Taevus · 528 12/6/21
One small trick (which maybe a common sense) for this card is aiming get rid of up to 2 clues on a location you are heading to. When you are 2 locations away from it, move towards it once (now you are next to that location) and drain a clue. Next turn, move to that location then push a clue away. Can be great when there is a skill on that location which says you have to get rid of all the clues first. While clues can be used to advance, now you can play the location skill ahead of time. (Then your friends maybe grabs the clue you pushed away.) — 5argon · 1904 1/9/22
What happens if you move an enemy that is already engaged to an investigator? Does it disengage, or does the engaged investigator move with the enemy? — Arkhon · 1 1/25/22
It disengages, as it no longer has an investigator present at its new location. — olahren · 2337 2/18/22
8

Absolutely retarded card that only emphasizes the problem which many in the community are starting to clearly see; Seekers are insanely overpowered. Not only do they only have a single weakness that is not even that big nowdays, which is dealing with enemies, but they keep giving them incredibly busted cards like this for no reason. I have no idea how this card made it out of the testing phase like this.

So now you do not even have to worry about enemies? You can just run over them if they have hunter and push them back, or if they do not you just push them aside so you can still keep on collecting clues like a maniac? What a joke! And a cherry on top, you get 2 stats that are actually pretty relevant, since you need Intellect obviously, but Agi tests usually deal damage which is one minor weakness of Seekers since they have a bit lower Health. It really is funny how the same brains that thought this card is fair managed to print stuff like Trench Knife and Henry Wan and probably thought "hmm yeah this is good, they will play it".

If this card only dealt with clues and gave you 2 stats, it would probably still see play, since removing clues from high shroud locations is really interesting thing that has so far not been explored that much, but with this card it will not even matter since most will use it just for enemies and occasional moving of clues. Sorry, this was not a review since there are not many things i can say about this card, but only a rant. Cards like this are clearly becoming a problem and show some favouritism when it comes to Seekers at the developers table, and it is not a good thing for the health of this game.

So to conclude = Taboo worth, or just ban it at your table when you see how OP it is, like it used to be when someone used to play with Higher Education and Dr. Milan Christopher all the time.

Blood&gore · 95
@Blood&gore, Hello there! I have finally dug back into Arkham after it gathering dust since it came out. I have a couple of cores, Dunwich, and bought into the EotE boxes. I'm curious what makes you think the card is so broken. I see that the effects are quite powerful, but it costs 3xp. Then you have to draw it, then you have to play it for a whopping 5 resources. Between the odds of drawing it, having to set up other cards, and afford paying for it, this card had *better* be bonkers good. — Judicator82 · 17 1/13/22
@Judicator82 Hello friend! Well the thing is, Seekers have no problems with resources since they have cards like Astounding Revelation, dr. Milan, Crack the case etc., and they also have the best card draw in the game and also the best search in the game. It usually is not a problem to cycle your deck a couple of times as a Seeker, so you always find cards like Gene relatively easily — Blood&gore · 95 1/13/22
I do see it being powerful, but you have to build for this card in mind. 5 resources, even with most seekers economy, is expensive. But maybe it should cost 2 more exp? Or gain exceptional. Although it's supposed to be taken by rogues as well, so it's hard to judge these things. — Therealestize · 45 1/14/22
If you're a new player, pay no mind to this sort of review. Gene stands in contrast to the 0xp Milan and at 3xp more provides the same stats, loses economy, but gains incidental enemy management capabilities that's worth the XP, price tag and the ally slot. — suika · 8741 1/14/22
I think the problem is that 1) Gene combines too many benefits in one card and 2) her ability is unlimited, save for the exhaustion. Seekers can even use Shortcut to dislodge an enemy that is on top of them. When you compare to other cards that move enemies (e.g. Warning Shot, Bait and Switch, Shroud of Shadows, Flute), they all come with extra limitations or limited uses; Gene doesn't even cost an action to trigger. I think if her ability had some kind of cost, perhaps an AOO-less action or resources, then she'd be balanced. Also, I appreciated this review, and don't see why it should be simply dismissed when there are far worse ones on this site. — jemwong · 86 1/14/22
Mainly because it starts by rating it card "absolutely retarded" and "insanely overpowered", and insinuates designer bias (what a joke), and advices new players to ban it, which is just terrible advice. Outside of solo (the most rarely played mode), in most circumstances dislodging the enemy doesn't remove them for good, it just means someone else has to deal with them. Having tabled it a few times, Gene is a strong card that doesn't break the game or make the game unfun to play — give her a fair shake before deciding that she's not for your group. — suika · 8741 1/16/22
For any new players reading this: this is a very rough review and probably should be disregarded until playing this card. — athenian858 · 1 1/31/22
Sorry about this being a bad review, but after some months of playing i stand by my comment. This card is completely broken. The fact that if your friend is stuck with an enemy and you just run in and kick that enemy out for basically no cost is broken, and moving clues turned out to be very very strong. But what breaks this card is that it can kick enemies that are engaged with you or the other player. It completely breaks the game when used with some movement cards — Blood&gore · 95 3/17/22
Frankly I kind of agree with @Blood&gore. While his review is harsh, this card is incredibly strong because of its enemy moving ability. — Daniczech · 1 6/29/22
I agree even after the taboo she's still broken. Just thinking of playing her in true solo EotE: the Forbidden Peaks scenario should be a cakewalk as she moves clues from the location you're moving into to the one you just left. In most cases that's going to make it a heck of a lot faster. — Krysmopompas · 296 9/17/22
4

With Kymani Jones, an allready great card got even better. Intellect and agility just so happens to be the stats Kymani likes. The ability to pull enemies into your location means you can save your coplayers from further away. Move within 1 location, pull away the enemy that bothers your comrade, and take it out with a quick evade+evade. By drawing the foe away from your friend, you'll save an engage action, meaning you'll get even more out of a Grappling Hook. This seems like an auto-include when playing Kymani!