Exhaust Henry Wan: One at a time, reveal random tokens from the chaos bag until you choose to stop, or until you reveal a , , , , or symbol.

- If you chose to stop, for each token revealed via this effect, you may either draw 1 card or gain 1 resource.

Tiziano Baracchi
The Wages of Sin #155. 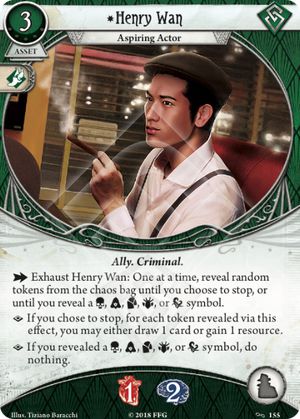 This card is usually terrible, and needs support to be worthwhile. See the argument below to help understand why this is true. Support would be: campaigns/games with less of the negative tokens AND cards that can cheaply and repeatedly alter the outcome of a token draw (such as Wendy Adams).

The cumulative odds of continuing to draw favorable tokens, using the standard difficulty Night of the Zealot chaos token pool is:

This suggests that on average, you will get slightly less than 2 tokens before failing. Assuming you pass each draw, the chance of not drawing a negative symbol on each token draw is:

A. If you always stop drawing after 1 token, you will succeed 69% of the time, which is terrible because you get less than one resource or card per action.

B. If you always stop drawing after 2 tokens, here is the likely distribution:

C. If you always stop drawing after 3 tokens, here is the distribution:

jmmeye3 · 209
Poor Henry. He's just not good enough to catch a break. This basically confirmed my instinct about this card. He might be worth a gamble if it was gain resources and draw, or maybe if it was a free trigger instead, but an action is just too much to spend on that level of risk - even with, say, Wendy it's not worth it to use her ability since you would need to pitch a card, trading a -1 successful draw for a <1 average gain. As it is, he only has some stupidly near-broken potential if you could somehow manipulate most (or all?) of the bad tokens out of the bag. — pneuma08 · 21 7/11/19
I think the one thing you could say about Henry is his ability gives you the option to gain a bunch of resources now, which if you really meed that many resources you probably built the deck wrong anyway. His soak isnt bad for the price also, but that’s a terrible reason to run any ally. Rogue allies are not particularly strong anyway, so it says a lot that Wan is probably the worst one. — StyxTBeuford · 632 7/12/19
Sorry, I made a typo. Instead of “This suggests that on average...” it should read “This suggests that half the time...” The website did not allow me to edit the review. — jmmeye3 · 209 7/12/19
Good review for a terrible card. I think the only reason to take Henry is to troll your friends. — cb42 · 21 7/12/19
4

While Henry falls direly short of playable on his own, he's intended to synergize with Mystic cards that manipulates the chaos bag such as: The Chthonian Stone, Protective Incantation, and Seal of the Seventh Sign. You can potentially modify a chaos bag to have only a 10% chance or possibly 0% chance of drawing a symbol. Henry could, given the right circumstances, draw/gain 10 cards/resources in any combination of your choice. Henry's more of a theoretical 'this is very unlikely but amazing when it does happen' rather than reliable and generically powerful ally like Leo DeLuca.

darkernectron · 7
Agreed, but outside of multiplayer combo comps, we’re probably not going to see much of him since the only Mystic who can run him is Jim - and his ability strictly incentivizes wanting more skulls in the bag - not fewer. Sefina is also a consideration at the moment, but she can’t run SotSS. — Death by Chocolate · 12 7/25/19
The problem is you have to seal 6 or so tokens to pull off a good combo. For every token you pull out, you lower the chances, but there's also less to pull from, so in a bag of 16 if I pull all the symbol tokens out aside from the autofail I've got a 1/11 chance of pulling the autofail, then if I don't it's 1/10, then 1/9 etc. To really make this card go off you have to get every single one of them out, otherwise it can too often whiff. So you'd need a Seal of the Seventh Sign which is already a mathematically terrible card to run) , 2 Cthonian Stones, 2 Protective Incantations (which on their own are costing you resources) and one other sealing effect (might require another set of cards, I'm not certain). After all that you get to dump the contents of the bag on the table and grab 10 resources/cards per action, which for the sheer investment and opp cost required is still terrible. So I guess early on in a campaign it's more doable (if someone runs Mateo for Seal) given that there's less symbols in the bag, but even there you have to rely on drawing all of these cards that, largely on their own, are not very good anyway. The only time I see this working is in a team of 3 Mystics (one of whom is Mateo) + Sefina, all of whom have their own set of cards. So... basically never. — StyxTBeuford · 632 7/25/19
The Cthonian Stone is unique, so we only have access to 4 total spooky seals in a party. — Death by Chocolate · 12 7/26/19
Yeah the problem is the cost/benefit ratio. A Protective Incantation will cost 1 resource but unless there's a critical mass of tokens out of the bag will in return gives Henry less than one extra draw so the net is negative. Chthonian stone and the Seventh Sign both help, and some campaigns run fewer bad tokens, but all told he just isn't worth it with the current card pool. The odd thing is like most rogues he has a potential to go nuclear with enough combo pieces but there's always risk there at the cost of one action unless someone can get ALL of the negative tokens out of the bag (it's scary enough drawing one token out of the bag, and Henry needs you to draw 4 or so to be worthwhile). — pneuma08 · 21 7/26/19
Wow yup Cthonian can't even be duel wielded so that limits things even further. So yeah, I don't see this happening any time soon. — StyxTBeuford · 632 7/26/19
I've seen it happen, but I don't think it was really worthwhile. Or rather, the part of it that was worthwhile was not having to deal with the autofail and whatever the worst symbol token was. — Katsue · 8 8/17/19