Forced - At the end of your turn: You must either spend 1 resource or discard Protective Incantation. 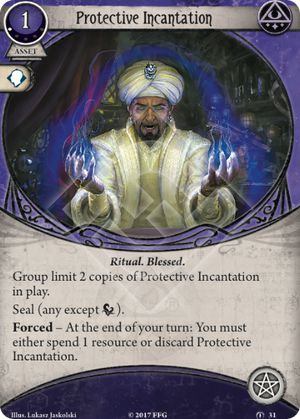 The economy boost your entire group gets from not having to boost/commit cards to cover that -5, is that worth 1 resource a turn?

Is it worth an arcane slot? Hmmmmmm.

Rich via Dr. Milan Daisy Walker is taking this all day long.

spoth3d · 3
Might be good for Carolyn too, since she has the economy to support it and her arcane slots aren't that valuable. — SGPrometheus · 250 5/26/18
If you go into tests mostly with ability score of 2 higher that the difficulty, then this is not really worth it. If you aim to hit the highest negative, and you remove the single highest token, then this saves you resources in the long run — Adny · 1 5/29/18
0

Great Card, you could always use 2 copies on a single investigator that has the ability to take it and has the Mystic aspect as secondary. It seems to me though that if a single investigator has two copies in play, the act of spending one resource covers both of the copies. It is not obvious that this can't be the case, since that would take up both your arcane slots and that would be enough trade of as it is. Anyone has a citation that officially states wether you have to pay 2 resources if you have two copies out, instead of 1 resource ?

Sacrillegal · 1
The text on the card is self-referential (refers to the specific card). So you will have to spend 1 resource for each copy of Protective Incantation. — vvi1g12 · 6 6/26/18
This card occupies an arcane slot, so it' — Django · 2741 6/28/18
Sorry for double post. This card occupies an arcane slot, so it's hard to play as primary mystic when you'd want shriveling and Rite of seeking in play. But for those who don't need the slots it's a very powerful card. But the cost of 1 or 2 ressources per turn is a problem. A rogue like sefina is able to counter the cost with lone wolf and a seeker with Charles Ross can help the character wtih this card to pay item assets. — Django · 2741 6/28/18