If you succeed by 1 or more, gain twice that many resources. 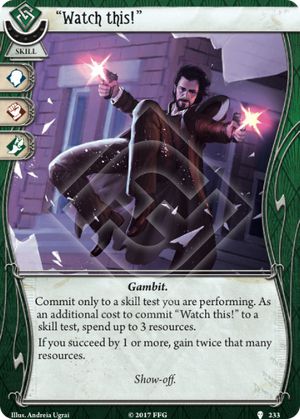 This card was enough for me to fall in love with rogues.

The icon spread deals with the three attributes that rogues care about. All rogues like the willpower and agility and MOST rogues will make some fight tests.

Oh and you only need to succeed by 1 or more to get a return on your "gamble" of up to three resources.

By itself, it will probably accelerate your resources from 3 to 6, making it a skill equivalent to Emergency Cache.

But it gets better. The card has a few other delicious combos!

The best and probably most powerful combo is using double or nothing to turn your net gain from +3 credits to +9 credits. That is quite a resource swing!

You can also use it with Alchemical Transmutation to get a similar "burst". Add in Double or Nothing to gain a potential of 18 resources from a single test (albeit with a three card combo).

The card is really good. All Rogues like money and most investigators ALSO like money. So long as you have something to spend your fat stacks of cash on, this card will serve you well. Slot it now and thank me later.

Myriad · 1157
Wouldn't it be 12 resources with Double or Nothing? Commit 3 and gain twice 3 - twice. — mgorka · 1 1/29/18
Yeah it would be 12, but taking the 3 spent as an additional costs that makes a net gain of 9 — witchfan · 49 2/4/18
I desagree. 3 resources are spend as a base cost for commiting Gambit. You are not doubling commit costs already invested only gain effect. Ofc 12 minus 3 invested means you gained 9 if that is what you've ment. — Bany · 14 11/7/18
When you compare this to emergency cache, don't forget that "Watch this!" doesn't actually cost an action ;) — Palefang · 59 12/7/18
But will I flip the table over when I play this, then draw an auto-fail? — bigstupidgrin · 80 1/28/19
the rogue life does involve a lot of table flipping, especially where tentacles are concerned — Zinjanthropus · 213 6/26/20
So... what's the common opinion? Playing with the Taboo list (Double or Nothing is illegal), is this card worth playing? Is it a good way to get cash fast? Or is the gamble not worth it? (I've got my eye on you, auto-fail tentacle token....you always pop up when we are counting on a particular effect. haha) — VanyelAshke · 172 11/26/20
It's a good card. 3 actionless resources is good. You won't always win, but if you're careful you should most of the time. I think it does have competition from a number of more recent Rogue econ cards, though, particularly Gregory Gry and Faustian Bargain. Also Easy Mark for only 1 additional XP. — Zinjanthropus · 213 12/18/20
5

icon makes it easy for Dexter Drake to use this as another way to pay for cycling expensive assets (alongside cards like David Renfield and Faustian Bargain). Sometimes you have to work to find good or tests to use this on, but tests are trivial to both find and pass as a mystic.

anaphysik · 83
Combine with Alchem Transmutation’s low will test plus any other Rogue succeed by effects (LCC for example) for more shenanigans. — StyxTBeuford · 12744 6/10/21
I love that combo! I also play alchemical level 2 and commit Double or Nothing and Momentum to the test. Wicked good fun! — LaRoix · 1608 6/16/21
I’ve been meaning to do a big money Dex based on this concept so I’m more than happy to sing the praises of oversuccess cards like this one and Momentum for Dex — StyxTBeuford · 12744 6/18/21