At any time, an investigator at your location may reveal to you the Item assets in their hand.

You may take an additional action during your turn, which can only be used to play an Item asset from the hand of an investigator at your location, under their control. (Both investigators may spend resources to pay its cost).

effect: +1 for each Item asset you control. 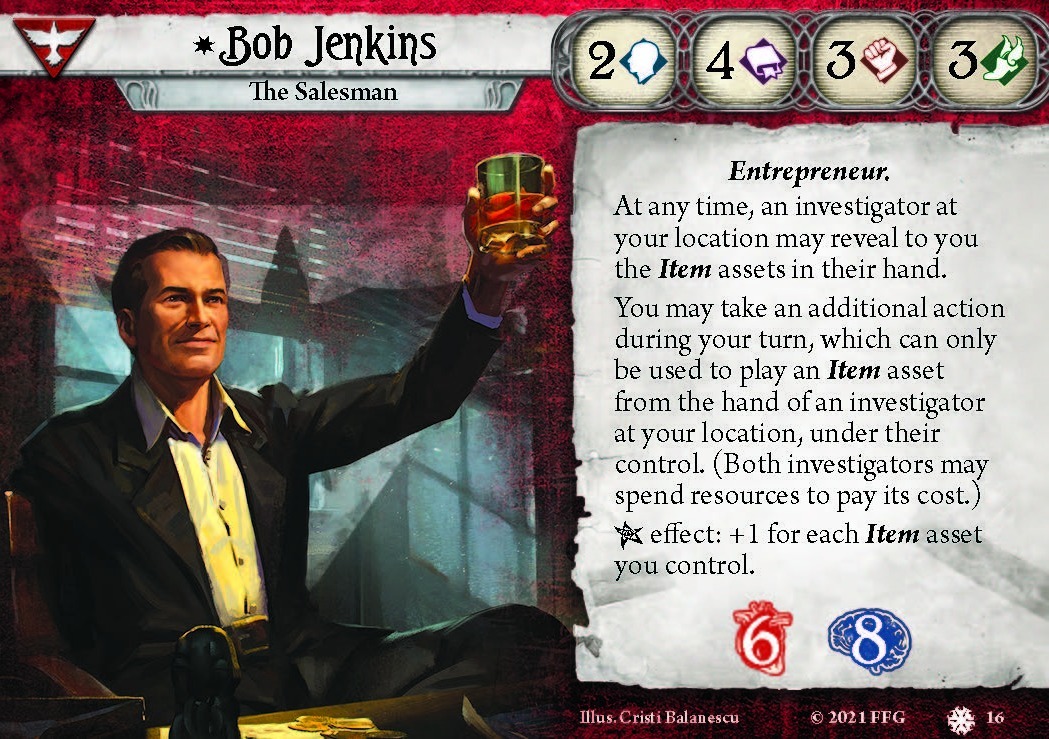 According to Bob, the secret to success as a salesman is persistence. People just need to be told what it is that they want. Repeatedly. Recently, Bob came into possession of a handful of "cursed" golden coins, and he hopes the same persistence he so famously advocates will help him to uncover their origin and purpose. If he plays his cards right, maybe this will be his big score. Maybe he'll finally be able to retire and buy that boat he's had his eye on and spend the rest of his days fishing in a tropical paradise. Or maybe Bob will finally come to see all that glitters is not gold. 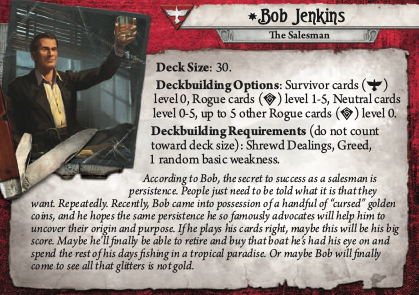 (If you've seen The Music Man, proceed. If not, have a look here first: youtu.be )

CASH for the Tokens and the Totems and the Moonstones.

CASH for the Thermos, Pipes and Painkillers.

CASH for the Shovels and the Lanterns and the Newspapers.

Ya can Move, ya can Draw, ya can Parlay, ya can Fight,

Ya can Fight all ya wanna but it’s different than it was!

Why it's the Axe / Horse combo made the trouble,

Gone, gone, gone with the Thermos, Pipes and Painkillers.

Gone with the Signs and the Knives and the Vests.

Ever meet a fellow by the name of Bob?

Never heard of any salesman Bob.

Well he knows what’s in your inventory!

Knows what’s in my inventory?!

Or a doggone thing!

He's a fake, and he shouldn't know your inventory!

He's a Shrewd-Deals man and he sells Catalogues

To the ‘gators in the town with the big Thompsons

Weeell, I don't know what’s in yer hand but I do know

You can't make a living playin’ other people’s cards, no sir.

“You owe me one”, perhaps, and here and there a Teamwork-

No, the fellow plays hands. YOUR hands! I don't know how he does it!

But he lives like a king! And he dallies and he cluevers and he picks and he shines.

And with a transaction, certainly, boys, what else? The gator pays him!

With a transaction, certainly boys, what else?

The gator pays him!

BUT HE’LL KNOW WHAT’S IN MY INVENTORY!

So, I don't have a ton to say yet, but I've always wanted to build a Lupara Scavenging deck, I've tried in Finn, a bit, but you need a lot of cards to reach a good level of efficiency, and his 5-card splash is a bit limiting. Bob can take both Lupara and Scavenging without it counting toward any card limit, and his ability both synergizes quite well with Scavenging (mitigating some of the disadvantage of not being able to run Scavenging (2)), and gives him a built-in way to get the Lupara into play without using a normal action (other investigators must find stuff like Joey "The Rat" Vigil or Sleight of Hand to do this). He can even dump it into his discard with Act of Desperation for an additional 2 damage (at +3 no less).

Like Finn, he could have some issues making making shots connect, but he does have access to a lot of the same means that Finn can use to pass tests. A few examples are Lucky!, Momentum, Well Connected, High Roller, Fight or Flight, Justify the Means, Sure Gamble. Of these, Finn can only choose a very limited sub-set of the Survivor cards if he wants to also have Scavenging, while Bob has to use limited slots for Well Connected, but it is a pretty good card for him (Plus, with RttCU, we get Well Connected (3), which is no longer taking up his 5 L0 Rogue cards).

I, for one, am excited about this!

With Bob Jenkins's of 4 and his access to Lola Santiago / Gené Beauregard, he looks like a good candidate as a cluever in a duo. And with Shrewd Dealings, Scavenging and the free action to play an Item each turn, you have a great combo to cycle Old Keyring / Flashlight as long as you succeed your investigations by 2.

As Flashlight doesn't discard by itself, you can use Joey "The Rat" Vigil to discard it for a profit and have it in your discard pile ready to be scavenged.

And once the Old Keyring is free, the Flashlight makes you a profit of 1 thanks to Joey, you can go for a Well Connected deck.

Can you win an adventure without taking any move actions? Yes, with safeguard, shortcut or an automobile! Can you do it without getting any clues or evading? Yes, if you’re a guardian.

But can you do it without playing any items? Even in mystic, that’s difficult.

At maximum, Bob revolutionizes cross-class item usage. Sister Mary with a lucky cigarette case for draw power. Lily doing gunkata with a Thompson. Monterey Jack with durable lockpicks that start at +9. And those are just things Bob can slot naturally! With Shrewd Dealings, any non-signature item can go to any investigator in a three-player game.

At minimum, your party gets a free chance every turn to do the action everyone likes to do: fill their tableau with assets. Live a little, make some money, even in Antarctica. Maybe somebody needs a refrigerator.

Bob Jenkins has a bit more flexibility with his starting deck compared to his fellow Eote investigators, because he can easily swap in level 0 cards later with Adaptable should he want to. Not a huge deal, but maybe interesting if you want to upgrade one of your level 0cards

"At any time, an investigator at your location may reveal to you the Item assets in their hand." This is not just the first step to use the 2nd paragraph's ability, but a flavorful play with the "Table Talk" guideline stated in the Revised Core Set booklet that the hand (and the deck) is hidden information. And I recommended trying this out to get the most fun out of this character. I opt-in to "Table Talk" for the first time recently and it makes the game really interesting. (e.g. Cannot say "Perception" or an amount of icons you can contribute. You have to believe in friendship and go for it if someone says "I can help!".)

It means player cannot just outright say, "I just draw .45 Automatic, let's group up and you play it for me." while being remote. You may hint that you needs Bob's help to buy an item, before finally revealing it once you grouped up.

Cards on hand are not necessarily telling the story that the investigator suddenly found a gun, it maybe that he brought a gun all along but need "resources" to use it, which is an abstract value, in this case it might take some time putting bullets into it, or finding it from deep in the bag, or gathering courage to use it. But when playing with Bob, the story changed to that when you reveal your .45 Automatic from hand, you are asking Bob to order this specific gun (maybe you forgot bringing it) and then pay for it together. This is a win for flavor for your table.

Bob's resource count is an open information, so you may hint that Bob has enough or not enough resources to pay, without saying "4" cost of .45 Automatic before you group up. (However with more talks/probing, it maybe easy to deduce the cost of the hidden information card.) This affects Bob's decision if Bob also need to use resources for his own and adds to the fun of declining or accepting the group up.

On the other hand, Bob with Shrewd Dealings make this more complex to ask for stuff that might be useful for him from all players. e.g. Even if Bob knows someone put Painkillers in the deck and wants it, since deck is also a hidden information, Bob cannot ask for a specific card. No one can answer that they have Painkillers on hand without breaking the character, either.

Instead, the other players need to give a hint to Bob once they see Shrewd Dealings in play (now an open information), and Bob needs to give a hint that he is in trouble. Even when Bob is not in trouble, Bob don't know what could make him even better with cards of other player's hand. So the table needs to speak up (intentionally vaguely). The secret to success as a salesman is persistence, after all!

The game’s areas of hidden information (the cards in a player’s hand and deck) exist to maintain the feeling that each investigator is a unique individual in the game world, and makes their decisions without complete and perfect knowledge of what everyone else knows or is thinking. A good means of maintaining this illusion is to not name, read off, or allude to individual cards that are hidden information (i.e., in a player’s hand or deck)