Uses (2 keys). If there are no keys on Old Keyring, discard it.

: Investigate. Your location gets -2 shroud for this investigation. If you succeed, remove 1 key from Old Keyring. 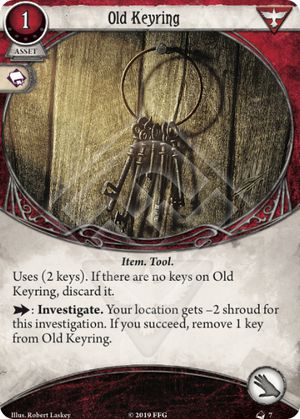 A reprinted Flashlight? What gives FFG? Well.... Not quite!

Old Keyring actually differentiates itself dramatically from Flashlight with several key details that completely turn this classic mechanic on its head.

Tsuruki23 · 2331
Basically anyone who takes an early flashlight but has access to survivor cards should take this instead. — SGPrometheus · 686 5/24/20
Scavenging triggers in ST 6 of the skill test, while Old Keyring wod discard one St 7, so you can’t actually use them on the same skill test. — iceysnowman · 159 6/6/20
iceysnowman is correct. If you had a second Old Keyring in play or discard you could use them to bring each other back, but it won't put itself in the discard in time to Savenge itself. — Death by Chocolate · 1230 8/29/20
I think the one big drawback to Old Keyring compared to Flashlight is the fact that Flashlight DOESN'T discard itself, which makes it a better candidate for Act of Desperation. You will probably never AoD this card, but a Flashlight is a great target for it, netting you likely 2 or 3 clues for no cost, versus Keyring's 2 clues for 1 cost. That said, it's easy to take advantage of Keyring's fail ability in someone like Stella, and it works incredibly well with "Look what I found!". I definitely think, 90% of the time, this is better than Flashlight. — StyxTBeuford · 12739 9/26/20
Talk about power creep. I wish the investigator decks were never released. — flamebreak · 19 2/5/21
This just in, card that only some investigators have access to often more powerful than card all investigators have access to. More at 11 — NarkasisBroon · 10 3/18/21
2

I need to wait so long until Stella Clark released. So I afraid someone would discovered this synergy first.

AquaDrehz · 184
There's a step missing here. Why does the test always fail? If it is high enough to make Jenny consistently fail (5-6 shroud) then this isn't particularly great and you'd be better off with an Intel report. — DAAAN · 1 5/13/20
Agreed. It is guaranteed success on Shroud 1-2, and even Shroud 3-4 will sometimes be a pass for Preston (and fairly often for Jenny). — Death by Chocolate · 1230 8/29/20
The other issue to this combo is that it costs you an action to fail the test and reduce the shroud by 2. You would probably be better off just buying the clue with Lola and including an additional economy card in your deck (at least for Jenny). I could see Preston using the Old Keyring to get clues from 2 shrouds anyway. — TWWaterfalls · 850 9/5/20
This doesnt work. At all. — JeremyL · 1 10/18/21
The -2 for the shroud only applies to the particular investigation. You can tell by the Investigate keyword and the fact the text says -2 FOR THIS INVESTIGATION. You cannot use Key Ring or Flashlight to somehow reduce the cost for assets like Lola Santiago — JeremyL · 1 10/18/21
@ JeremyL: it is possible, because there is a lightningbolt window in every test before and after commiting cards. During either of these you can trigger Lola's ability, while the shrowd is lowered. — Susumu · 234 11/8/21
Add in Drawing Thin to guarantee failure and generate cash for Lola. (^_~) — 4649matt · 2 1/17/22