After you fail a skill test: You may take an additional action during your turn this round. (Limit once per round.)

effect: +1. You may instead choose to automatically fail this skill test to heal 1 damage and 1 horror.

"I can hear it. Can it hear me?"
Aleksander Karcz
Stella Clark #1. 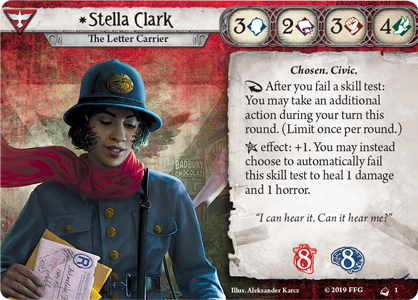 Deckbuilding Requirements (do not count toward deck size): 3 copies of Neither Rain nor Snow, 1 copy of Called by the Mists, 1 random basic weakness.

Before Stella began working for the postal service in Arkham, she knew two things with certainty. First, her parents made a mistake when they called her their son and gave her a boy's name. Second, the house on the cliff in Kingsport whispered her true name - the name she chose for herself - late at night: "Stella." Delivering the mail six days a week in all kinds of weather wasn't an easy job, but Stella loved knowing that she was helping people connect with one another. Then she started finding the letters. At the end of her route, there was always one extra envelope in her bag. It was always addressed to her. It was always postmarked from Kingsport. And it always contained a letter with one typed word: "Stella."
__Deck Building
Search for cards usable by this investigator
Reviews
11

I think people get the wrong impression of Stella. Her abilities reward failure, but there are really two ways to go: failure with success, and failure with “not caring about success ”.

What makes her so special is that there are so, so many survivor cards that reward failure. Predestination, take heart, rabbit's foot, “look what I found“, Live and learn... So if you’re going for partial success, you have the option to fail in your first and second action and set up your third and fourth. What’s great is, even in campaigns like the dream eaters where there aren’t many skill test on your encounter cards, you can slot the new level zero “test of will” to either get rid of a treachery or gain an extra action (and probably a card, because rabbit's foot is the best fit for an accessory.)

Permanents like a quick learner, which would be poisonous for most other survivors, let you fail early and succeed later. In fact, a -1 to future difficulty test means that you’re going to face automatic successes, especially if you’re dodging a low agility enemy, hitting an acolyte or group of rats, or using your old key ring to investigate a three shroud location. (Vital to appreciating this card: knowing that it doesn’t apply to the mythos phase. Your stats are safe there.)

In solo games, you’ll be able to persevere/bungle your way through skill test and fights with “neither rain nor shine”, getting these amazing +3 bennies, recurring with resourceful, and later True Survivor. Or you can rely on the Mysterious Raven to attack your sanity in exchange for one action clues, and heal with Grimm's fairytales.

In a group, you’re likely to get in a flex role: you’re great at agility, and with dark horse or the right skill cards, can be good at a few other things. Sometimes, with Peter S by your side, it’s soaking fear or dodging enemies. But Stella has a surprising role that is harder for other survivors to play: support. Neither rain nor shine allows you to give +3 wild skill icons to fellow investigators. Plus, it gets rid of the sting of failure. Some scenarios have cruel effects that, when resolved, can defeat you, take rounds off the scenario, or drive you insane. Not anymore.

You’ll have a lot of options to pick through as you gain experience, because the chainsaw and your .18 derringer both reward a failure first style. True survivor and drawing thin, while expensive in terms of XP, make an amazing late campaign engine.

Playing Stella will have you saying weird things though. Things like “darn, I succeeded all of my actions!”, or bragging about how how only the grit of the Postal Service can take on the horrors of the universe. So watch out for that.

When I first looked at Stella, I worried about being able to trigger her ability reliably with lower difficulty Chaos Bags. Then I fooled myself briefly thinking that her ability wasn't much help except as a bonus to the Survivor "win by losing" strategy (it feels really good to attack an enemy with .18 Derringer, miss, Use Oops! to hit another target reloading the pistol in the process, then shoot the original target with Stella's special action).

Now, while both of those are at least partly true, I'm beginning to see Stella's ability as "tempo protection." While a on a critical test will still ruin her day, Stella gets 3 successful actions in a turn far more often than other investigators. The versatility of that "failure insurance action" allows her to do anything, where most of the investigators with bonus actions (e.g. Ursula Downs, Finn Edwards) are constrained to one sort of action, and Stella is a lot more versatile.

LivefromBenefitSt · 535
Rabbit's foot + Draw Thin. Fail better! — MrGoldbee · 1005 8/31/20
Drawing Thin is insane! Forget Dark Horse, you're going to be rich! Add in Quick Learner x2 and the occasional Eucatastrophe and you will pass the big tests. Neither Rain nor Snow completely negates any treachery with a test, then has 3 wilds, because why not? — Taevus · 338 8/31/20
tempo protection is a really good way to describe it — Zinjanthropus · 157 8/31/20
1

One thing the other reviews didn't touch on is how amazing Stella's health and sanity are. With very few exceptions (Calvin and Lola, and Pete except with Duke he does), an investigator's combined value adds up to 14 or 15. Stella is blessed with a generous 16! This might not seem like a huge deal, but health/sanity is king in Arkham Horror. Many scenarios are down to the wire and 1 more damage or horror can make the difference. And not only that, Stella has 8's in both sections, so she has no clear weakness! This, in combination with her access to Peter Sylvestre and Jessica Hyde and all the other survivor soak, makes her incredibly tanky! And remember, this is all just gravy on top of an amazing ability and solid skills. In fact, considering how good Stella seems to be with her current card pool, I don't know if she needed that additional hp. But I won't complain.