Return 3 Innate skills from your discard pile to your hand. 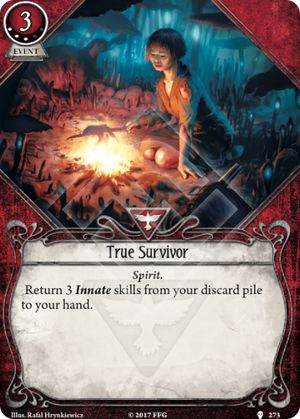 Once you have two Resourceful in your hand, you can even recover this and any other survivor card each turn.

Innate cards, which are those? It's: Unexpected Courage, Guts, Manual Dexterity, Rise to the Occasion, "Not without a fight!", Resourceful and Survival Instinct. Out of faction there's Eureka!, Inquiring Mind, Opportunist, Quick Thinking, Fearless, Defiance and Inspiring Presence.

Some pretty good cards there, Resourceful in particular has big combo potential, you can recurse True Survivor with it and basicly play infinite skill cards.

To routinely hit 2+ cards with True Survivor you need 6+ of them in your deck, preferably as many as 8, that means that you're using Unexpected Courage, the most flexible of the bunch, Resourceful since it further enhances your recursion and its also flexible. The other 2-4 cards would depend on the exact survivor but generally all of them can put "Not without a fight!" to use. I wouldnt take "Not without a fight!" in a deck if you dont intend to get True Survivor.

This is a big nope In Wendy, perhaps the character where it would be the best. If you can stomach the risk of removing all your hard-earned skill cards when you draw her weakness then by all means try it. Mind you that it's not QUITE as bad as it might seem but just keep it in mind when you plan the deck.

Silas Bishop is going to love this card, it's probably going to be very good complement to his skill-heavy ability.

Dog and "Ashcan" Pete can do lots of stuff with True Survivor but perhaps most notably is the fact that he can recurse Inspiring Presence, a very nice combo interaction.

William Yorick can do a similar combo with Inspiring Presence, reloading upgraded Beat Cops for example.

UPDATE: After trying this card a bunch in Silas Marsh I can say that it's a terrific way to reload your hand, but the tempo is so terrible that having enough time and money to pay for just the one True Survivor is difficult enough. You want to draw and play this thing late in a game, when most of your cards are in the discard pile. If you really want this effect more then once then recurse it with Resourceful.

Since Stella Clark came out, this is IMHO one of the candidates for a taboo list. Her signature card, already pretty strong when combined with (red version of) Grisly Totem and True Survivor ... laughs at any test-based treachery the encounter deck throws at her ...