"Not without a fight!"

Commit to a skill test only if you are engaged with an enemy.

For each enemy engaged with you, "Not without a fight!" gains . 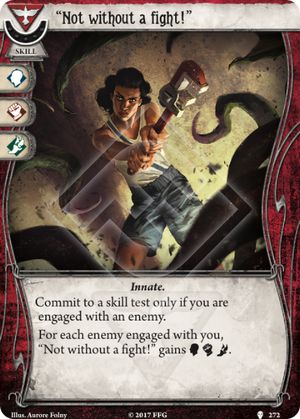 Tried it and I found myself in a very simple, predictable even situation.

The situation where I wished I'dd just slotted Unexpected Courage rather then this far more limited wannabe that outright fails to be useful for pretty much every test where flexible icons are useful.

The only time this card proved itself better then Unexpected Courage was during a Cheap Shot action where we realized that we double tapped the icons, and we're not even sure that was a legal move and even then, much too specific to be routinely useful.

My opinion about this card hasn't changed, but I've started to find a use for it: When you want a deck with a lot of skills to use with True Survivor, this isn't a bad option to slot and recurse, even if it's just to throw the card away on a Wendy Adams re-roll. Also it's relatively useful in Agnes Baker decks as a tertiary source of boosts or to punch a Swarm of Rats in the first few scenarios.

Lots of cards out since this released, it's binder fodder, never taking it again, not even for the folks who LOVE skill cards. Somebody is going to have to have "Not without a fight!" printed in their deckbuilding rules for it to show up in a deck of mine.

Tsuruki23 · 861
For thiisI don't think i'll ever play this card, it's too situational. — Django · 2116 4/27/18
Sorry for double post, but i can't edit my comments. For this card to provide any benefit over Overpower or Unexpected courage, you need to be engaged with at least 2 enemies (so it provides +3). It's likely you'd be engaged with 1 after mythos phase, but a second one needs extra effort, like evading in previous turn or engaging one. However these actions could've been used to kill it instead. — Django · 2116 4/27/18
This isn't a for every one card; but mainly for combat focused suvivors. It's got utility in that it can be used as needed; at worst it's +1 will. Most times it will be on par with unexpected courage. The difference is that you can also use it to evade if you have more than one monster on you and are using Machete, for example. Or have people stack up monsters on you in the Mythos phase, then use the boost to pass will-based enounter checks. It's a niche card, but it can find room. It's also innate, so True Survivor can recycle it. — CecilAlucardX · 2 4/28/18
I would put this in a Wendy deck, mostly because it has the flexibility to be used for many purposes. I see this like a second Unexpected Courage. The thing is: I can always use it to evade, as I have to be engaged with an enemy to do that, I can always use it for +1 Willpower (and maybe more) and I can sometimes use it to attack -not always as I have to be engaged with the enemy, and if I'm engaged with multiple enemies I also get a nice boost. — matt88 · 981 5/6/18
Oops, my mistake! I can't always use it for +1 Willpower, but if I happen to be engaged with an enemy when a Willpower test occurs I can use it for +2 or more. I like this card in general. It has its restrictions but I find it generally useful. — matt88 · 981 5/6/18
The thing about this card is that it isn't a question of Unexpected Courage or this. You can take both. People would probably run 4 Unexpected Courages given the chance. — janoche · 1 7/21/18
If I read this correctly, this card gains the three additional icons in addition to the printed icons for every enemy engaged? — cheapmate · 1 9/3/18
I would expect that the power of this card would vary, depending on whether you were playing an enemy-heavy campaign like Night of the Zealot, or whether you were playing solo, because you encounter far fewer enemies that way. However, no one else seems to be discussing that, so I think there's something I'm missing. — Scrubsby · 1 9/10/18
Reading the text of the card, and comparing it to others, it seems to me that you can play this card for someone else's skill test. Now granted, I'm sure the Survivor does not want to be engaged with every enemy around, but that does open up some additional options. — Tiktakkat · 30 9/18/18
I would also note that Zoey can take it, and she would rather want to be engaged with multiple enemies, especially if she has a Survival Knife or two equipped if one of the enemies survives to the end of the Enemy Phase. — Tiktakkat · 30 9/18/18
I don't think Unexpected Courage with Cheap Shot would contribute twice, as added cards only add to skills based on icons matcing the test (or wild). The test doesn't change. I can also add that in cases like that the grim rule say you should go with the worst interpetation if you can't be sure. — Telruin · 1 10/9/19
Not without a Fight contributes double for Cheap shot, it provides both the combat and agility icons, doesnt make the card good though :P — Tsuruki23 · 861 10/9/19
Skill Test Timing goes trough how you add a card to a skill test. Only the "appropriate" icons are applied, and it further spessify that appropriate icons are wild or those matching the skill test in question. — Telruin · 1 10/18/19