Fight. Add your value to your skill value for this attack. If you succeed by 2 or more, automatically evade the attacked enemy. 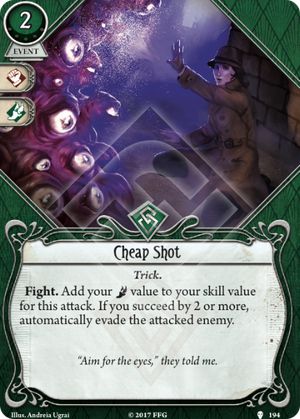 I'm not a fan of this card, but in it's defense there's a few kicker's I just want to make you aware off.

Additionally, the auto-evade part is less useful than you might think for a rouge character, usually you can dislodge opponents from yourself without issues, the second kicker is that this card is perfect for pulling an ally out of trouble. The mechanics let you bypass engaging the enemy and go straight for a reliable (for Skidd's) attack.

A relatively rare pairing of + icons on a card (The other 2 cards are Hard Knocks and Backstab). Mixed icons aren't a reason to include a card but it still lends a form of stability to it's usefulness.

Is it a good card? MEH. But it does a specialized job that may impress you from time to time.

Edit, Circle unbound: A new character just showed up that really blows up the usefulness of this card. Rita Young can smack enemies with this thing for 2 damage + evasion, for her the Agility conversion is outright fantastic as a means to actually land the attack, the free evade earns her time to do her thing, with weapons that tend to be action intensive,it's a good pairing.

I intially underrated this card while focusing on 1 damage part. And by underrated, I considered it unplayable. The one damage isn't very impressive especially if you have an investigator that has several weapons in their deck. But if you are running a more Seeker style Rogue (no/few weapons) getting a very likely point of damage and an evasion in one action is pretty good.

My latest Jenny deck (Seeker style) didn't include any weapons though and the one damage was more valuable and Cheap Shot also increased her chance (usually by +1) at evasion if she hadn't gotten many assets into play to buff her agility. Cheap Shot allowed Jenny to chip away at enemies health or outright kill them with the Alice Luxley or Sneak Attack combo. Leo Anderson still did most of the killing in the campaign but evasion Jenny held her own and didn't require a full-time chaperone.

I think this would also work well for "Skids" O'Toole especially since he could combo Vicious Blow with it. It is less useful in a Finn Edwards deck since it doesn't combo with his free evade action. Rita Young is a pretty good option since it combos with her evasion damage ability although I am still not certain it would make it into her deck or stay in the deck beyond a scenario or two.

It still isn't a great card but if someone runs a mostly weaponless deck then it has a solid niche use for a few investigators.