After you evade an enemy, exhaust Pickpocketing: Draw 1 card or gain 1 resource. If you succeeded by 2 or more, do both instead.

Stanislav Dikolenko
A Phantom of Truth #195. 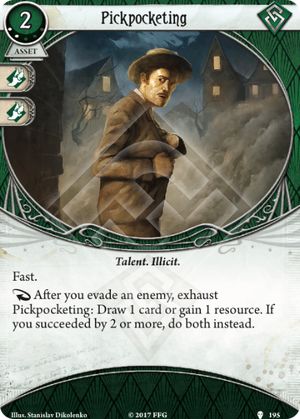 EDIT: Complete review overhaul. The old one was just wrong and 8 months later and several decks trying it out later it's time to rewrite it.

So. Evading. A strategy that may or may not be very useful depending on your investigator and campaign. The old Pickpocketing grants cards on successful evades and isn't fast. The cost, action to play and the slow pace at which it returns on it's commitment is just too damn slow, thus Pickpocketing "classic" is a terrible terrible card, another downer for a strategy that didnt have too much support when the game was brand new.

Things have changed quite a bit since then, the full campaign maps are generally less claustrophobic than the core campaign and less populated with stuff that you need or want to kill, cards like Lockpicks, Lola Santiago and Ornate Bow exist now, making based characters more powerful, more consistent and all-round better (not that every would pick the bow but the option is there). In fact the latest campaign greatly rewards sustained evasion.

So, back to Pickpocketing. Here are some strong points in the cards favor:

Note that the option to gain resources from evades is the mechanic that really makes/breaks this card in comparison to the 0xp version. The ability to fund successful evades with past successful evades give you sustained test-effectiveness. it's impossible to predict exactly how many evades you will succeed on in a scenario, but I bet a dude like Finn or Wendy might be required to evade 6+ times in a given scenario, not counting failed tests, with this in play that'd net you 6+ resources and/or 6+ cards. A, fast, 2 cost card netting you so much returns is obviously terrific.

Do consider Pickpocketing when you build an based investigator, especially if you have stuff like Lola Santiago, Trench Coat or Peter Sylvestre in it to raise your base value into 5+ territory. Lola Santiago + Pickpocketing is a good combo in of itself since the evade actions can now fund your clue gathering like never before.

Tsuruki23 · 2233
Ok lets end with that falacy, 1 action is not equal to 1 resource or 1 card. Frist of all, you get 5 of each for free at the star of the game and one more each turn, let stablish that the game is more or less 12-15 turns long so you have 36-45 actions that means that if you use all your actions to get resources/cards you will get 5+36+11=52 or 5+45+14=64 resources/cards and if we divide it by the number of actions we hace done we have that an action give you 1,44 or 1,42 each. That mean that card really put you down 2 actions maybe, at worse because we haven't consider that you have emergency cache or more eficiente drawn efects in your deck. — Botas · 8 1/14/18
So you need to use it 3 times or 2 with the full effect to get an advantage. Lets think the investigator that could get and advantaje for this card, Wendy Adams and Sefina Rousseau are the greater candidates both have a high agility, both need cards/resources to play their event heavy decks and both don't want to waste resources in weak monsters that their guardian companion could easily kill. It is obiously not a card for all the green boys, and maybe is not the best for a solo-deck but it feels quite nice for they two events queens of the game in multiplayer game in with your investigator should be rather be a especialist than a toolbox kid. — Botas · 8 1/14/18
"Playing this sets you back 3 actions. 1 to-Draw, 2 for-2 resources." - Why would you count the cost of drawing this card? Every card has to be drawn from your deck before it can be played so it's pointless to consider that action. — kingofyates · 23 7/28/18
"Why would you count the cost of drawing this card?" It is more that drawing a card has an opportunity cost, the cost of not drawing any other card from your deck (or from outside your deck if you had not played this card). This opportunity cost can be "regained" by drawing another card, thus using an action. — Alleria · 105 5/21/19
This review was written before Delilah, but just feel like it's worth mentioning that Delilah allows you to convert a successful evade action into 2 damage (for a cost, but Rogues have great economy cards). Put down two of these babies and a Lucky Cigarette Case, and you can most likely draw 3 cards and gain 2 resources with every evade (The card draw helps ensure that you can commit enough to keep succeeding by 2). Then you can kill them off with Delilah once you're done with them. It's especially good with Winifred, because her innate ability gives her an additional card, and her high base agility makes her already pretty good at this. You can draw your whole deck pretty fast and get all of your key assets out. — Zinjanthropus · 206 5/17/20
This is also really good in Finn! It's virtually free to use with his extra action. I was able to get up to 30 or 40 resources with only this and Pay Day in Murder at the Excelsior Hotel. I think this kind of shines if you have a relatively harmless enemy on the board who you can keep evading rather than getting swarmed with enemies. By the time I started pulling enemies I wanted to kill, I was already able to Contraband my Chicago Typewriter a few times. — Zinjanthropus · 206 6/13/20
6

The lvl 0 of this card is barely usable. But this one is down right broken with Sefina if you combine it with suggestion. Sefina can easily get suggestion up to 9 to 10 without boosts and can keep elite enemies locked down whilst the rest of the team gets some work done. Jenny can probably use this as well with suggestion with a bit more work. very very strong combo

Vicoforbes · 18
How does this interact with automatic evades? — dkayarkhamdb · 14 7/12/21
@dkayarkhamdb An automatic evade is still an evade, so pickpocketing will trigger. However, automatic actions are not considered "successful" as no skill test was actually performed - you just resolve the effects. Therefore you will never trigger the "if you succeed by 2" part with an automatic evade. — snacc · 742 7/18/21