Strength in Numbers gains a icon for each different class among cards you control.

"Watch my back, will ya? In fact, watch my front, too."
Yoann Boissonnet
Edge of the Earth Investigator Expansion #77. 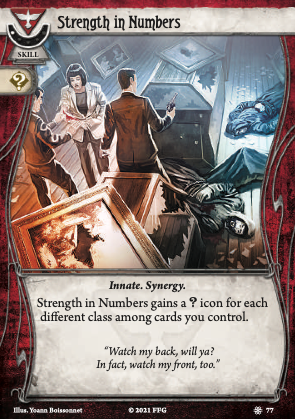 EDIT 8/27: Due to a recent card reveal it's looking as though the Synergy trait will appear across all the classes! Updating a few things in my review accordingly.

This card utilizes a heretofore untapped mechanic, which appears to be associated with a brand new trait--"Synergy"--hinting that there may be a whole suite of cards with similar effects. Whether it will be strong enough to warrant a new approach to deckbuilding, if it will be a suboptimal gimmick, or somewhere in between, only time will tell. In any case, the challenge will be finding cards from different classes that actually, uh, synergize, to form a functional deck. I doubt it will be so strong that you can eschew good deckbuilding in favor of just throwing in as many different colored cards as you can legally take. Also keep in mind it's mostly assets you're looking for--the cards need to stay in play to count.

Some important rules notes as I'm sure these questions will come up (good rule of thumb is look for the class icons!):

So you can get more value here by using multi-class cards from your off class, where the other class is one you normally don't have access to. For instance, William Yorick could play Enchanted Blade to get to +: one for being a , one for the icon, and one for the icon.

The downside is that you either lose value when you upgrade that card into a single class version, or you're not even eligible to upgrade it which will weaken your deck progression. This might be less of an issue moving forward, as there are leveled multi-class cards in this expansion.

So who should consider this and other Synergy cards? In general, the purebreds wouldn't be interested, and those with only a secondary class would have to use multi-class cards to get beyond a +2. The Dunwich group can take whatever level 0 cards they want, but since space is limited getting those cards into play will be a struggle and would compete with tried and true non-asset options. Those whose deckbuilding options include traits or keywords which appear across many class pools could get good value, but not if the trait is only associated with events/skills.

And then there's Lola Hayes. She's got the disadvantage of being Neutral, but she clearly has the best deckbuilding options for this archetype, and arguably is the best suited for it thematically. I initially thought it still wouldn't be good for her due to her role restriction and the setup required, but knowing the trait will appear in other classes and understanding better how she might build around it, I now believe one of the goals of this cycle is to give our favorite star of the stage a considerable indirect buff.

Lastly it's worth mentioning the combo potential with Teamwork, A Chance Encounter, "You owe me one!", and any other cards that let you borrow from your buds, greatly increasing the value of this and other Synergy cards in multiplayer. Strength in numbers indeed!

MiskatonicFrosh · 251
Looks better when you consider that Bob Jenkins can hand out items to another investigator, then commit this card to one of their skill tests. — togetic271 · 3 7/8/21
Bob can't take this card. We are all going to make this mistake so many times with all the Edge of the Earth investigators. — MouldOfMlem · 9 7/13/21
Bob can't take it, but one of his friends could, and Bob could give them some Rogue (or multiclass) items! Surely most investigators wouldn't mind a Lucky Cigarette Case. — Zinjanthropus · 212 7/15/21
According to https://arkhamdb.com/rules#Ownership_and_Control you control all the cards in your hand, deck and discard pile. — david6680 · 43 10/27/21
While you're technically correct, the more relevant ruling is that card/game effects generally do not interact with cards that are not in play (cards in your hand, deck, and discard pile are not in play). This is not the first time I've seen this misinterpretation and I'm not sure what the goal of it is other than to find a loophole that would end up breaking all sorts of already well-established basic card interactions if it actually existed. — MiskatonicFrosh · 251 10/28/21
I hate when they don't use consistent terminology. If they only wanted it to interact with cards in play then that is what should have been printed on the card. — david6680 · 43 10/28/21
There's nothing inconsistent about it. Able Bodied uses the same language and there is no confusion over what "control" means on that card, it counts the items in your play area. Nobody thinks Calling in Favors lets you fish an ally asset "you control" from an out of play area and put it in your hand, it has to be in play. Whitton Greene doesn't give you her bonus just because you have a tome/relic somewhere in your deck, it has to be in play. I could go on. Regardless of whatever "control" has to mean in the rules to encompass all abilities and effects, without specifying otherwise, a card ability can only interact with cards in play. There is nothing new or weird about the terminology on synergy cards, again, it's just people making up a nonsense loophole. — MiskatonicFrosh · 251 10/29/21
2

I can hardly wait to start running this in Lola Hayes. It counts her permanents, like Shrewd Analysis and Adaptable! It double-counts multi-class cards like Enchanted Blade! She'll be able to get this thing up to 4+ wild icons easily! Wow!

mattastrophic · 2506
I forgot about permanents! Definitely makes Synergy even stronger than I thought. — MiskatonicFrosh · 251 7/15/21