Exile a level 0-5 card in your hand. Discover 2 clues at your location. If the exiled card was level 2 or higher, remove 1 doom from the current agenda. Exile Burn After Reading.

Card designed by the Council-in-Exile at Gen Con 2020 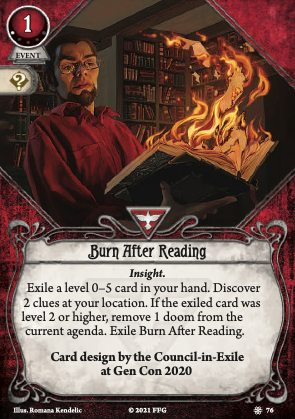 Fixing Decks with Exile cards is something I rather like doing, the few times it comes up it feels like cheating the system, spending 1xp to swap in a level 0 card you forgot sucks, but spending 1xp on flare and getting the swap for free is a good time all round.

Burn after reading removes two cards from your deck for 1xp and gives you testless clue gathering, it also allows something more interesting, the removal of high level cards, i don't think I have ever even considered swapping an XP card out for another one, I generally just ride it out even if the card seems to be close to worthless, but now you get to remove an XP card in your deck in exchange for the most powerful effect in the game, doom removal.

I think in a Deja Vu deck this card in a no brainer for easy clues and effectively adaptable (more than what Deja Vu already allows), if you have two Deja Vu's you could even run two of these and use them every game for 2 extra rounds and free clues, which may be worth the steep asking price. (12xp for the combo and another 4xp forany two level 2 cards)

As someone who adores gold pocket watch at its extreme cost I see myself having a lot of weird experimental fun with this.

This is a good buy for the last scenario of a campaign, even outside of a Déjà Vu deck. Survivors tend to have a lot XP by the end of campaigns, because their upgraded cards usually cost 1-3 XP. You should have no problem to play this card at maximum value and discard >= 2XP second copy of a card from your hand to also remove doom from agenda, which is very valuable expecially in final scenarios with Ancient Evils or similar effects. I would not run this card for scenarios 1 - 6 without Déjà Vu, but in a penultimate and ultimate scenario this is a strong card. Compare to Hallow or Fortune or Fate. I ran Burn After Reading in Yorick in Into the Maelstrom and got some value form it, because this scenario puts some pressure on doom clock through several cards.

Let's say I'm Preston. What stops me from using this card to exile lodge debts? I cannot choose to discard a weakness card, but don't see any prohibitions against exile in either the exile or weakness sections of the rules...