Spend 1 charge: You get +2 skill value for this test. (Limit once per test.)

After an enemy attacks you: Place 1 charge on Bangle of Jinxes. 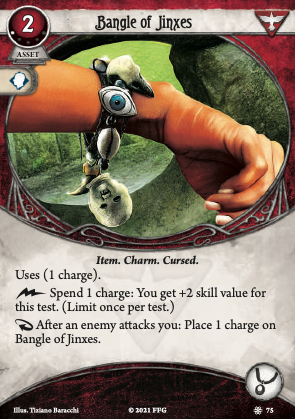 This is one of those “released exclusively for one investigator“ cards. Take it as Daniela Reyes, save up bonuses for hitting back and passing encounters. An extremely defensive Yorick or Calvin might see use for this, but only one character has a signature that goads the enemy. Which is a hell of a position to take versus the mythos, but there you go.

MrGoldbee · 1148
Tommy often actively utilizes 'counter attack' weapons and allies to increase action economy and could use this as well, as long as they were willing to give up some sanity soak. I could see this enabling a similar Survival Knife Yorick, but he already has such strong archetypes that it may not 'make the cut' except as an experimental deck. I don't think Calvin wants this, this is really for the 'Guard Dog also draws you Lucky!' synergy. — dezzmont · 69 11/10/21
Or unexpected courage more accurately. — dezzmont · 69 11/10/21
Speaking of Lucky!, Lucky! is way better than this card. So is Live and Learn. — OrionJA · 1 11/10/21
and Unexpected Courage — OrionJA · 1 11/10/21
Oh, wait, it does come with 1 charge for free. That's a little more tolerable. — OrionJA · 1 11/10/21
Or 2 in Akachi. But I don't see this card in Akachi at all. She has way better Accessories, and she kills enemies before they ever attack. — Susumu · 165 11/10/21
I think this is just better in Tommy than it is in Daniela, since using it on his int gets him to a reasonable number, and he's more likely to need it on will or fight, too. — SSW · 148 11/10/21
I've used this card in Calvin with good results. Cal is often looking to trigger opportunity attacks, and has access to counterpunch and Toe to Toe, which has nice synergy. — Tanz444 · 9 12/1/21