After an enemy attacks you (except an attack of opportunity you provoked), even if that attack was canceled: Either deal 1 damage to that enemy, or automatically evade it.

effect: +1. If you were attacked by an enemy this round, you automatically succeed, instead.

"Relax, tough guy. I'll handle this. You stand over there and look pretty."
Cristi Balanescu
Edge of the Earth Investigator Expansion #1. 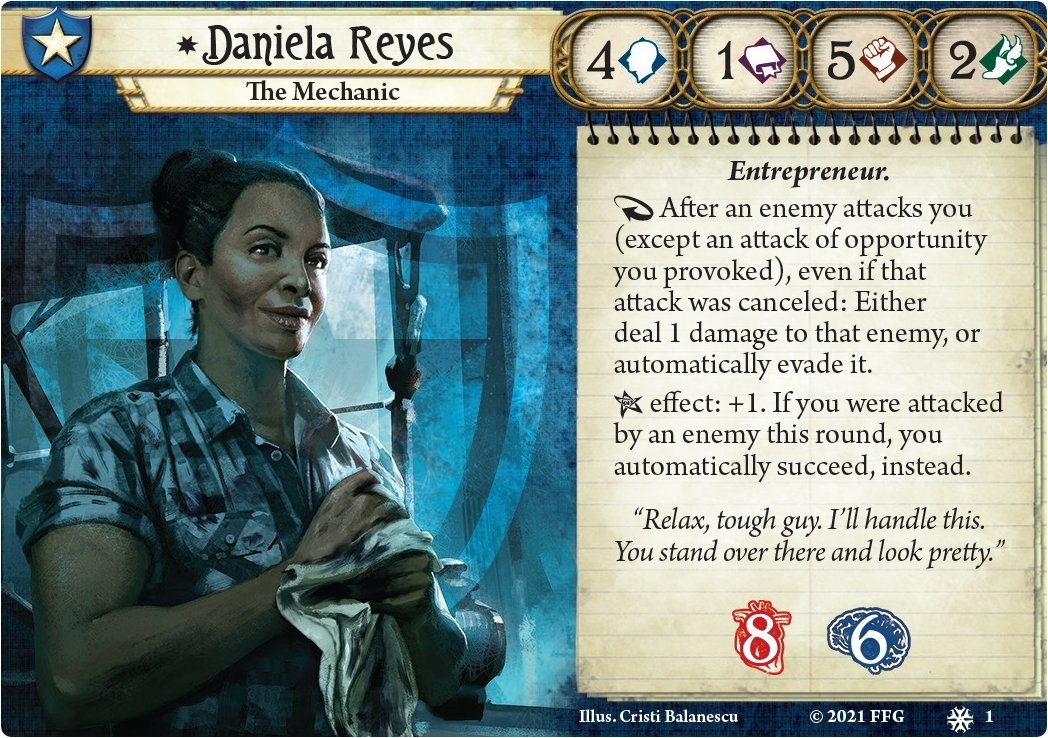 Daniela always figured she had a good life. She had a loving, boisterous family. She had a steady job that used her brains and her hands. She had enough money to spend on fast cars, pretty girls, and her motorcycle, Gabriel. Then her brother, Ramon, got caught up in some trouble. Her mother warned her to be careful, that darkness lay ahead. Daniela set a glass of water behind the door for her mother's sake, to catch evil spirits - just as she'd been taught as a child. When Daniela awoke to find it shattered, she was determined to figure out what happened and fix it. Just like she always did. 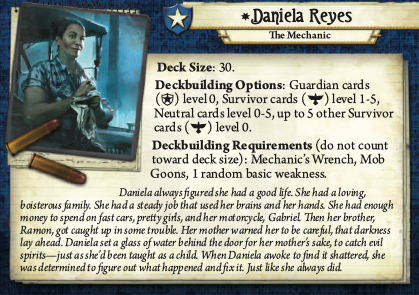 Deck Building
Search for cards usable by this investigator
Reviews
17

Having seen her played a bit, she's so much better than the first reaction seems to indicate. Daniela is the champion of not doing terribly much but everything still dying, a style of play you really have to lean into.

For starters, run her with lots of soaks. Whether old classics like Cherished Keepsake and Leather Coat or fancy allies like Aquinnah, Peter Sylvestre, and/or Jessica Hyde, there's plenty of ways to stay alive and tank hits. When you get hit, you hit back harder. Someone mention Bandages + Guard Dog already? Because let me tell you, that hurts.

Cards like Toe to Toe and of course your wrench reward you for getting hit. Slam into big enemies and watch them crumble. Get yourself a Fire Extinguisher and watch the enemies tremble in fear. Slot in Brute Force and Stunning Blow and you've got yourself one nasty killing machine.

I would recommend Daniela for bigger groups. I think that if you want the classic combo in 2 , you'll be fine. In 3-4 she can easily be the primary fighter and just destroy enemies left and right.

Yes, I am sad I can't run Shield of Faith or Lesson Learned in her. But such is life.

10/10 would let this lesbian absolutely murder a bunch of babies in Innsmouth again.

Veronica212 · 182
This review reminds me of the Stone's Unyielding Defiance playstyle in Spirit Island. Let them do their worst and watch them suffer. — Yenreb · 15 12/22/21
'not doing terribly much but everything still dying' is pretty much the experience I've had! When there's no enemies around, I find myself mostly just drawing cards and twiddling my thumbs while everyone else runs around doing stuff. But when the baddies show up, she becomes the queen of no-test-needed damage and off-turn kills — Fenris49 · 1 1/3/22
8

We have a mechanic that is unable to Maintain equipment properly... Or who is too clumsy to screw a moderately different to handle ocular to a rifle. Not to mention that she is totally unable to show up well prepared to her job. She's unable to sticking to any plan... And her ability to improvise are quite limited...

Daniela seems to be the oil-riggy-kind of mechanic where screws come the size of swimming rings. She deserves the 1 intellect she has.

GrueneLupenAufheben · 66
This is barely scratching the surface of Daniela's flavor weirdness: Why is she a guardian 0? What does it even mean thematically to 'develop' into a survivor, isn't that the 'unprepared' class? I know the flavor has been moving on from that but what gives with Daniela starting out with access to police resources and fancy handguns but slowly becoming someone who depends on getting Lucky! or smacking folks with improvised weapons? All of the other 'evolving' characters have a clear in universe hook: Norman is a scholar who discovers magic is real and begins to learn it, Jack has to develop from being a globe trotter into an actual archeologist to solve his dad's murder, Lily Chen was trained by a mystical order but becomes more practically focused once she enters 'the real world,' and Bob starts out as an unready survivor but realizes he is far more cunning and deadly than he first thought. One would think a Guardian into Survivor might represent a burned out cop, a sort of degradation, someone who is becoming unready and just is barely holding on, but that doesn't make a ton of sense for Daniela, who is mysteriously starting out as a pseudo-cop/soldier out of the gate. About the only thing that really fits is the fact that weird quirky rituals of protection fit survivor very well and she is a great candidate for using A Test of Will, but even then she is going to want to use the level 0 version because she can consistently pass the test! — dezzmont · 119 11/1/21
Consistantly pass the test (3)? With 4 base willpower? Maybe on easy, but you need to invest into it even on normal. I also thin, Daniela is a weird mechanic. She does not heal horror on mending leather jackets! — Susumu · 211 11/1/21
What are you talking about? She has a 5153 statline — dezzmont · 119 11/1/21
She has 4152, acording to ArkhamDB and also the (German) card, I own. Where did you see 5153? — Susumu · 211 11/1/21
dezzmont is implying that Peter Sylvester is always the ally that she'll run. I don't agree though; the default allies of my choice would have been Guard Dogs, Rita, and Aquinnah. — suika · 8500 11/1/21
Its a joke yes, because of how popular Pete is, and how you would be taking it in that deck. Same reason Wendy is REALLY 5 willpower base. Pete isn't a bad pick for one of your allies though just because of how much damage you take and his purpose as fantastic encounter protection. — dezzmont · 119 11/1/21
@Dezzmont, maybe she's an army veteran adjusting to civilian life? — OrionJA · 1 11/1/21
Well, 5 willpower after playing your statboosting ally is still not a comfortable level to be to relyably use ToW (0). But I agree, he is a popular choice, so depending on team composition, he might not even be available, if another investigator (Agnes, Carolyn, Finn...) profit far more from him. I also agree, that there are other, possible better allies for Daniela. — Susumu · 211 11/1/21
Intellect seems to be the stat needed to repair vehicles ( https://arkhamdb.com/card/07099 ) so Daniela is actually one of the least capable mechanics in the game. Maybe she's a factory engineer, and her unique skills at reparing factory sized herring canning machines are distracting when she tries to fix small and fiddly vehicles such as... boats? — olahren · 1933 11/4/21
6

There are a lot of things to like about Daniela. First, she lets you play tank guardian in a way no one else but Tommy can really master. But I don’t think she’s the second coming of Tommy, I think she’s the blue/red answer to Trish.

Previously, the number one way to lock down bosses was to have Trish Scarborough use quick clue gathering to automatically evade them. And she’s still super effective at that! But her ability is limited to once per turn, and Daniela's is not. Plus, as a cluever, you might have Trish elsewhere while big enemies spawn.

And Ms Reyes has the same stumbling block that Agnes does: if you spam their powers, you will get burned by the encounter deck. Neither is particularly great at agility checks, and damage can come from locations as well as foes. Often, punching enemies first is a better option than reflexively letting them clobber you, especially without access to money-makers like "I’ve had worse".

Her 4 base will is solid, even on hard.

Daniela is an excellent partner to Aquinnah. And if you’re willing to exile cherished keepsakes and old leather coats, the sky is the limit for soak with solemn vow. But when it comes to damage, observe the Christmas rule: it’s better to give than to receive.

Edit: Having played with her a little more, her ideal events are super cheap. That cost curve, and waiting for enemies to spawn, means it’s possible to put out a guard dog (or two!), flesh ward, and a survival knife before enemies cover the board. It’s refreshing in a guardian to be able to engage enemies as a final action, knowing you’re going to do 2-4 damage during the enemy phase! Annoyingly, there’s little lvl 1-5 survivor tech that does what dogs, “Get behind me” or the hallowed mirror do. And there’s not a ton you can do about enemies that do something besides damage/ horror on a hit: if you want to assign damage to your Trusted hounds, you can’t use dodge.

MrGoldbee · 1234
On the topic of locking down bosses: if Daniela is the first-in-sequence gator to be attacked by a Massive enemy, can she use her reaction to evade the enemy before the other gators are attacked, thereby preventing those further attacks that round? — HanoverFist · 511 10/6/21
@hanoverFist a good question and a good point. From the rules: "hen an enemy with the massive keyword attacks during the enemy phase, resolve its (full) attack against each investigator it is engaged with, one investigator at a time. The lead investigator chooses the order in which these attacks resolve. The massive enemy does not exhaust until its final attack of the phase resolves." So since tha attack is not simultaneous, the lead investigator may pick Daniela first. The last sentence means general exhaust which happens after an enemy's attack, I believe, and doesn't prevent from being exhausted via specific abilities. So, I would say, Daniela can save everyone from a massive monster's attack, you are right. — chrome · 12 10/11/21
@chrome This would be a marvelous tanking-ability for Daniela if it works out this way, and it certainly feels on-brand for her... especially since, unlike so many auto-evade effects, Daniela's is not limited to non-elites. Thanks for the rules & timing breakdown! — HanoverFist · 511 10/18/21
Huh. A burned out soldier who's degrading because of his bad experiences. Thematically, that's Mark. Pity about that. — Lailah · 1 12/21/21
3

Daniela may be more stronger when everybody possesses 0xp, but with the increasing of exp, Daniela's strength will indicate a downward trend rapidly. The only weapon could be thought "passing" is Sledgehammer, which is much weaker than Cyclopean Hammer. No matter the difficulty is standard, hard or expert (I think every investigor could behave well in the easy mode), the potential of Daniela is pretty limited at any time. Somebody may state that She could take Aquinnah, but this counterattack system lacks the most important component, which is Survival Knife of 2xp. All in all, this is not a relatively strong investigator. 4-1-5-2 could be strong, but this attribute advantage is little compared to the huge disadvantage of deck-building restrictions.

I love the deckbuilding restrictions of this cycle of investigators, but I have to say I am saddened beyond words that you can't squeeze a Survival Knife in her list. It's a real shame too; it's been a long time since I got as excited about a new investigator as I did when I read this card. Who knows, I'm not terribly familiar with the Survivor card pool. There's probably some busted stuff in there for her