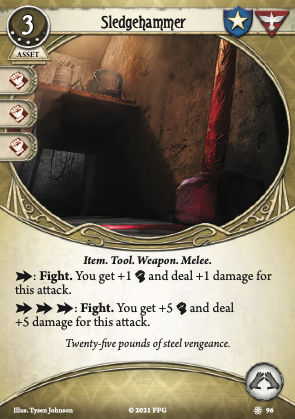 Is Arkham Horror not a game you actively enjoy playing? Roped in by a friend or family member, do you just wish that your turn would end faster? Well, call me Bob Jenkins, because FFG has the deal for you!

With Sledgehammer (4), you can make sure your turn is over and done with in minimal time. Spend every iota of your effort and all of your actions crushing that Swarm of Rats into nothing but juicy red pulp, and leave the actual minutiae of doing something so base as looking for clues or discovering locations to the other members of your team.

Sledgehammer (4) -- It's better than just watching.

(As an aside, I'm eternally amused that upgrading to Sledgehammer (4) adds five pounds of weight to the head of the hammer. Lol!)

fiatluxia · 35
I would rather imo run the lvl 0 sledgehammer with Carolyn and attempt to kill rat >:) — Therealestize · 29 9/26/21
This is basically a weapon that deals 2 damage per action which in itself is good if it wasn't for the fact it costs 4 XP. If you are using the first ability, which is basically what you will mostly use, you then only get +1 Combat, which is pretty low as most level 2 weapons and some level 0 weapons offer +2. On the plus side there is no gimmick (as in Fire Axe and Meat Cleaver) and it's unlimited (unlike the .18 Derringer). This weapons only finds its value in the second ability that allows to deal 6 damage for 3 actions (so still 2 damage per action) but with a hefty +5 Combat and you only need to draw one token instead of 3 (this is basically a ritual to summon the tentacle). However this is an ability that you only ever want to use on enemies with 5+ Health and there are really not a lot of them. Moreover if you are fighting some boss then you'd rather have a weapon that deals 3 damage per action like the Chainsaw. I't worth to note that Yorick might like this weapon in conjunction with well prepared since it has 3 Combat icons. But then again so does the already mentioned Chainsaw. — Killbray · 3357 9/29/21
Put the excess damage on Relentless for maximum profit — MiskatonicFrosh · 136 9/29/21
Yeah, this is definitely an end campaign Smack The Boss weapon. — fiatluxia · 35 9/29/21
I never understand why people make comparisons between items with limited uses and those that are unlimited. E.g., the already mentioned Chainsaw. — puert · 47 12/4/21
4

I can't match how entertaining the other review on this weapon is, but I do want to chime in and say that this doesn't actually look that bad, if a bit on the bland side. When a person building a fighting-focused deck looks at this, they (rightfully) go "meh, I can do better than +1 damage per action." That said, this is a very solid weapon for the fighter who doesn't care that much about fighting, but is still expected to do it:

Leo Anderson wants to do ally shenanigans, but definitely wouldn't mind a solid (cheap!) weapon for smashing little fellows, and he can still put his back into it for bosses.

Roland Banks (particularly Parallel Front Roland playing with Due Diligance) might feel like focusing a little more into his investigative side, but would want a damage boost to murder nuisances who get in his way.

Tommy Muldoon, if he's playing a tank role for his teammates in a multiplayer game, or is investing his time and effort into working Agency Backup.

Silas or Daniela are less likely to go for it, but it's still an option for some builds for them. Basically any time you're going to be building most of your deck around something that isn't fighting, but still have 4+ fight and would rather smash things than run from them, this is a solid choice, if you can stomach the xp cost. Like Fire Extinguisher (3), getting consistent +1 damage on an unlimited use weapon at 3 resources is a steal, and this also lets you get in on the big fights without any further investment.

Malafar · 9
On the other hand, it's 3 xp, 1 resource, and a hand slot more expensive than Taboo Machete, just to make the +1 damage unconditional and give you a second option you probably don't want to use too often. And, I guess, to give Survivors access to it. — Thatwasademo · 42 11/28/21
1

This thing was made for Yorrick to turn enemies into a thin red paste. It pairs very well with On the Hunt and Scene of the Crime (you can use the single attack feature to do two attacks on the enemy in the above scenario, or galvanize to do it all in the same turn). Throw on some overpowers and a vicious blow or two and it's basically a one and done weapon for all but the most spongy bosses.

Definitely a monster slayer and if your survivor is focused on that, great. If you aren't though, pretty expensive and action intensive.

drjones87 · 43
Opps 2 and live and learn turn this from "cool" to "laughably hilarious", having four prevented misses per game is just so great with it, minibosses beware. — Zerogrim · 236 4/1/22