: One at a time, take up to 3 different fight or evade actions. Flip this asset over. This action does not provoke attacks of opportunity. 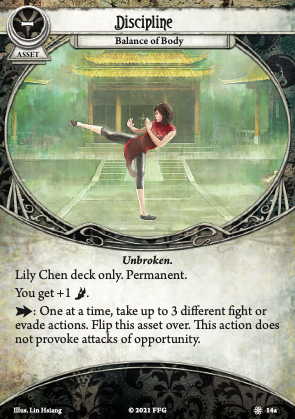 After the round ends, if no enemies were at the same location as you at any point this round: Flip this asset over to its Unbroken side. 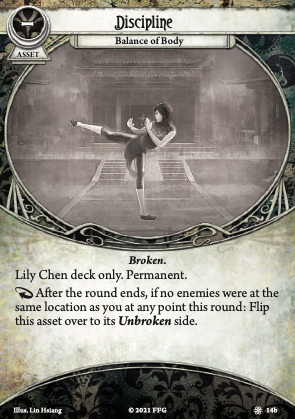 This Discipline has a little cool trick with Brand of Cthugha. (For Discipline anti-treachery battle mage Lily) Normally there is a risk of hitting succeed by 0 and scald you hand. Making Cthugha desirable on your last action. But sometimes when you are fighting multiple enemies with varying even-odd HP and is trying to clear them out as much as possible, you may want to play with the "adjust gas" feature of Cthugha, want to use Butterfly Swords for multiple targets damage distribution, and lastly maybe evade the big remaining guy to have a go again the next turn.

Many times I don't really want Cthugha to be the last action, because its variable damage ability is great to setup a follow up with Butterfly Swords so multiple things dies exactly, or setup for an another investigator to last shot it, or adapt to situation should symbol chaos token shows up and do something weird mid-fight.

Instead of using Cthugha on the last action, use this Disciplined triple attack action on the last action instead. 2 actions prior can be anything except the Cthugha, like your EotE 2 handed weapon of choice (Dragon Pole (get a boost from Cthugha arcane slot), Butterfly Swords (maybe don't exhaust it), Cyclopean Hammer)

Now that you get to take 3 different fight or evade that are not really "additional actions". (Otherwise the wording should be like Daisy ability which gives you real action, but with "which can only be used on fight/evade") You can then position Cthugha anywhere inside this 3 sub-actions. Hitting succeed by 0 would hurt your real action counter outside which had already ran out. You gain flexibility of evading as the last one, or using your 2 handed weapon after Cthugha which is now allowed to safely get succeed by 0.

Hypothetical Combo Alert! Consider the synergy with Ace of Rods. Get a free action with +2 to every stat - spend it on three baby attacks, and select for attacks that are buffed by multiple stats. Here are some ideas:

A solid day's work for the chosen one. And then you get to take your 3 regular actions...

Addendum: there are also lots of combos with Fang of Tyr'thrha, particularly that card's ability to attack enemies without moving to them, or to move during a flurry of attacks.

EDIT: What a difference one word makes. Different fight actions really sinks this card in a lot of ways that makes a lot of this review make no sense!

In my opinion the best Discipline, but one you almost always take second.

Disciplines serve three functions for Lily: A slotless stat boost, a powerful 'supermove,' and protection from her weakness, which goes from being mid tier if you can't burn a discipline easily to trivial if you can.

The agility boost doesn't seem amazing. After all, Lilly is a guardian right? She should be killing things! But the thing is Lilly isn't actually super amazing at killing things with her kit, as being locked to melee limits her damage twofold: She can't get the literal 'big guns' that can push past 4 base damage with super amazing action efficiency, and she can't slot custom ammo (which tends to, late campaign, effectively just read "+1 damage).

Now don't get me wrong, I am a firm believer that you can still be a primary monster hunter with even a 3 damage weapon like a Cyclopian Hammer: Generally even in a 4 player game your not really expected to murder more than one monster a turn just because that is sorta impractical math wise or uhh... questionablly safe because your aiming lightning gun at your seeker's and mystic's general direction and if your blasting away for 3 attacks you have a 20% chance to just flat out kill a fellow investigator if they have less than the enemy's damage+4 health in that case on that turn, even assuming you only fail on autofail. Your flexes and even cluevers are going to need to be capable of making sure people don't literally die if you have to leave a monster on them for literally one turn, or else your team has problems way more fundamental than 'do I do enough damage.'

But lower damage weapons do make you a bit more volatile in other ways. Sure, its now generally more acceptable to shoot or stab in your friend's general direction, but now misses hurt more, because a higher proportion of your actions are likely required to kill the enemy. This means that teams with 'utility guardians' using stuff like Cyclopian Hammer or a Tommygun are going to need peel tools, and evasion is one of those. And hey, some of those 'chaos bag protection' tools your probably taking on Lily like your fancy candles can make it even easier.

But lets be real, your really taking this for the active and flip effect. The speed could literally not be there and this would be a highly competitive option, because the burn and flip effect on this combo just so well.

Guardians often aren't fighting literally all the time. Even in a 4 player game you generally have 'bursts' of activity, where 2 enemies are drawn at the same time or something where you and your flexes contain them and beat them down, and then a period of quiet. Boss fights tend to be short intense bursts of activity, rather than drawn out affairs: if your wailing on something for more than a few turns your either evade-juking it over and over to trivialize the fight, or your losing very badly. The ability to essentially get an entire extra turn allows Lilly to handle huge emergencies way better than her card pool may imply. Sure she doesn't have a flamethrower, but she can swing that cyclopean hammer 6 times a turn for a whopping 18 damage. And it can more easily be divvied up vs multiple enemies, making it actually easier for Lily to handle 2 enemies popping up solo than most other guardians, rather than harder. And, obviously, for boss fights, getting two entire turns of attacks, or 5 attacks plus an evade, generally sets you up to win: very few bosses can handle 8 actions worth of guardian attacks over two turns even before someone helps you evade tank or you start using things like Dodge.

But the flip effect also plays into this guardian loop of 'handle problems, prep for problems while also trying to help out in minor ways.' Because Guardians often will experience quiet moments (Unless, I dunno, your running with 3 Cluevers who literally can't even handle a rat in The Secret Name or something, in which case that is super not on Lilly) it is quite common to have turns where you just never encounter an enemy, meaning this is very easy to flip. Because the stat isn't super important to you, its also ok to let this sit unflipped if you constantly get a 'trickle' of enemies, which is sorta a nice place to be as a melee guardian. And because the effect is so easy to undo, it is fairly safe to let this flip when your weakness hits.

So this creates a very huge mid-campaign power boost for Lily: After 15 XP (generally 2-4 scenarios in, depending on how well you do and how much your mystic likes to delve) you suddenly get the ability to get double turns sometimes even every other turn. It is good enough I might consider it for my first snag for Lily, but I think she would much rather take Strength or Willpower depending on how you are constructing your deck

dezzmont · 109
If you activate the discipline you have to take 3 different fight actions, so you can only activate each weapon once with the additional actions. — Tharzax · 1 10/28/21
What a difference a single word makes. — dezzmont · 109 10/28/21
Unless you use weapons like "Knife" or "Timeworn Brand". Not sure, if it works with level 0 Sledgehammer. Could you pack both the single and double action into one action? And would it cost 1 or 2 actions? In general, this card seems more designed for events than assets. — Susumu · 206 10/29/21
I would say, that you can cancel spent more than one action from this talent on abilities due to the word different. So you need one of your basic actions if you want to use both abilities of the hammer. And please don't forget that you need an action to activate this discipline! — Tharzax · 1 10/29/21
I imagine that you could still use a 2 attack Butterfly Swords with 1 of your different fight actions. Then a Spectral Razor, Then some Shriveling. — dlikos · 26 1/18/22