: Fight. For this attack, you may use instead of , and you get +1 skill value. If you succeed, spend 1 or 2 charges. Instead of its standard damage, this attack deals 1 damage for each charge spent. If you succeed by 0, lose 1 action. 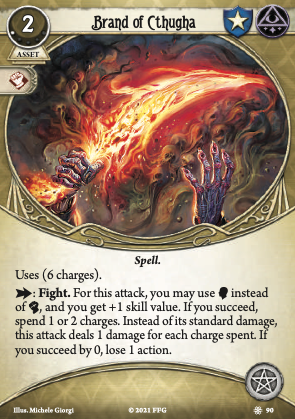 When I look at this my first thought is a backup 'weapon' for Nathaniel Cho with Boxing Gloves. Sometimes he needs to swing twice in a round for bonus damage, or he's run out of fight events later in a scenario. Brand of Cthugha gives a good backup in an uncontested slot and it can make use of the bonus fight from Boxing Gloves. All-in-all there's a lot to like here for 1xp and Brand of Cthugha(4) is just even more of it later on.

A new fight spell, but also one that is much more flexible than Shrivelling. Shrivelling costs 3, and does a total of 8 damage, and has a horror downside to picking the wrong token. For 1 XP, Brand of Cthugha costs a bit less, gives a skill boost (necessary for avoiding the 'succeed by 0 clause'), but only does 6 damage. But you get to spend those charges as you need them, and none at all if you fail. Mystic spells that do 2 damage have always been in an awkward spot dealing with 3 HP enemies -- how do you do that last point of damage? Guardians with 2 damage guns generally have dealt with this issue with taking a basic fight action, maybe boosted with Overpower. Mystics can use Wither or Sword Cane, or worse, spend another charge of Shrivelling and waste the extra damage. Here you just need this one card, and only spend one charge. Granted, you will run out of charges quickly, but there are more and more ways to add charges these days or pickup Spells from the discard pile once you've pushed it out.

For Diana Stanley, this card's flexibility comes right in the "you MAY use" clause -- use your combat skill at the beginning of the game. You'll be fighting at 4 right out of the gate. Once you've cancelled a few more cards, switch to using your Willpower instead, without needing to switch Spells.

The "lose 1 action" penalty is a real bummer, though. If you're engaged with an enemy, you have to fight it right away, unlike waiting until your last action with Rite of Seeking. If you have another weapon or fighting spell in play, use that first to do one damage and finish the enemy off with this; if you don't, you'll need to get lucky. This is even more the case with the upgraded version, which has a penalty of losing TWO actions. Another good idea is to pack a few events or assets that deal testless damage, like Beat Cop, or powerful fighting spells, and use this card to do the last point or two of damage.

dscarpac · 91
Playing Diana right now and brand has been nothing but constant wins, playing it for free with prophetic is such a cheat and feels disgusting to have +7 with just prophetic and brand(4). — Zerogrim · 262 10/30/21
For Diana this also synergies well with the Boxing Gloves. She has tons of great to good Spirit cards, in particular in her cancel & ignore pool, she can still play her Twilight Blade, if she goes for Bandolier (2) (or the second pair of gloves instead), BUT the strenght boost was mostly wasted on her. (2 uses of Spectral Razor isn't worth it, and weapons that only fight with combat not that great in her.) — Susumu · 271 10/30/21