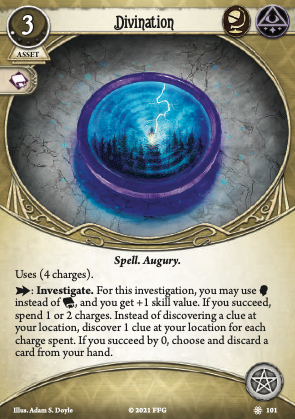 Such a nice little performer.

I've found that comparing Divination to competing "action compressors" is folly, because that's not what this card is for. In such a comparison a card like Rite of Seeking is the clear victor because Rite nets you more clues in less actions overall, at a lesser XP cost too.

Divination is a Test beater, it's the card that you use to leverage a consistent +1 bonus to try and beat a test. Similar action compressors, like Rite of Seeking are such a precious and powerful effect that you rarely risk the charges onto risky tests, you commit to building an engine where you're overpowering tests by +3, +4 or more. If youre at a shroud 3 location and you're stuck at 4 or 5, you'll think twice before risking your charges on that test. Divination's ability to not waste charges creates space for a card that does'nt require the same sort of empowering buildup or aligning stars to be safe to use, instead of spending further resources to play Holy Rosary or actions to search for icons you'll happily sit there and spend those engine building actions on repeat tests to try and fish out the clues instead.

This then makes the card more interesting for a less focused build, a singular copy of Divination will net someone like Roland Banks a card that can leverage his to quickly and effectively speed through 2 or 3 shroud locations without having to build an engine, and it gives him a shot at shroud 4 locations with a lucky bag pull. In such a "flex" deck, where alternative methods to pick up clues might be in place, the freeform ability to grab 1 or 2 clues again complements the deck by working around whatever amount of clues you manage to "cheat" with other mechanics such as Rolands , Lockpicks or Pilfer. Clearly Divination is a good card for "flex" strategies, where a character self-sufficiently covers bases in a team or covers every front in solo.

Finally, the combined access to and more than enables this card for a wider span of characters it also opens the window to very effective skill distribution in a deck, often enough Guts finds it way into a as a defensive mechanicsm and as a cantrip, similarly a Perception might serve to speed things up, with Divination you can channel whichever stat that you can get higher in any given situation, this of course is particularly important for Amanda Sharpe.

Dedicated cluevers with big engines and lots of teck and support will have better options for gunning down location after location, but this isnt a card for those dudes. This is a card for that Roland who's already running Grete Wagner and needs a slot-effective way to get a few more clues, a Diana who does'nt know if her or will be higher at any given point and mostly wants to fight, or just about anybody who is running Guts and/or Perception in their deck and is'nt trying to be the next pre-taboo Rex.

The most comparison for this card would be Rite of Seeking (2) or Clairvoyance (3). At first it seems like this card doesn't compare favourably to it, but there's a couple of advantages to using Divination. Let's compare:

The expanded access for and the ability to test could be useful for Trish Scarborough who typically wouldn't fill both her arcane slots and provides her another tool on top of her Lockpicks while keeping her other hand free for a handy Magnifying Glass. A traditional might take this with 2x Magnifying Glass or a tome if you're Daisy and get some action compression this way. Daisy in particular might like this card as it frees up her hands.

Perhaps the biggest boon is Carolyn Fern who's 3 typically holds her back from using spell assets and her restrictions prevent her from even getting Rite of Seeking (2). This card allows you to test instead which works much better for her and gives her much needed action compression. She can also access Enraptured to provide a few extra charges.

Speaking of Enraptured, this is a spell card that investigates that can actually use the bonus. So if you're playing a high , you could use this as your investigate card and use it to recharge your combat spell potentially.

The last point for Divination is a really big bonus here for most users in that you never "waste" the charge. Divination is more "spammable" since you don't have to worry about failing the test as much as Rite of Seeking, which can provide a tempo boost for finding clues you have a "good chance" of getting where Rite of Seeking may require you to commit more to try and guarantee success. This particular useful against high shroud locations where you might expect some attempts. On top of being 1 resource cheaper, the card is also cheaper by 1 XP.

This card also provides action compression compared to Sixth Sense (0) and a +1 boost, at the cost of having limited charges. I think even for classical , this card should be considered an option.

The card creator have really managed to create an interesting choice in the space between Sixth Sense and Rite of Seeking that somehow still has honest trade-offs between all three options.

shortpunch · 150
Is there a practical reason to ever choose to spend 1 charge? Is the bonus charge from Akachi completely useless? — ForrestWoodward · 1 7/22/21
Practically, yes, there will be plenty of times in a typical scenario where you only need to pick up 1 clue. That's the main reason many people don't go for RoS and take Sixth Sense instead, especially in lower player counts. Flexibility is part of the appeal here. — MiskatonicFrosh · 139 7/23/21
Totally agree! I am just building an Akachi Investigator focus for a 4 player game, and I have to take the hard decision to put Sixth sense even if it does not benefits from Akachi ability, but it will help to retrieve those single clues locations (odd location are more frequent in 1/3 players, so it gets more value), this is an obvious upgrade for Akachi I think, it also add more investigate spells into the loop, so you can find them on the mulligan. — marduke182 · 1 10/4/21
Along with Enraptured, this works with Deduction, right? Seems good for multiplayer. — ilksvorbern · 69 10/28/21
2

The interesting comparison for Seekers is with Fingerprint Kit. For one experience, you get:

On the other hand, Fingerprint Kit has its upsides:

The card sits in a weird spot for Seekers, especially the 5- Seekers, since Fingerprint has bigger upsides as long as you don't fail. This could be a good fail-safe for Amanda Sharpe on turns where her isn't boosted high enough to beat the whole chaos bag. Daisy Walker can take advantage of the Mystic synergies, but with her Tote Bag the Fingerprint Kit isn't a big deal either, and she might as well take advantage of the Seeker synergies. If you're not afraid of the and you're not playing on the hardest difficulties, there is little to recommend here for Seekers. Interestingly, the biggest winners are probably Luke Robinson and Gloria Goldberg, who can play this along with their other spells and still commit Seeker skills like Deduction to the test.

dscarpac · 81
without synergy is 3 resources, 3 actions and two tests to get 4 clues, which is only one higher than you'd get from just investigating, if you don't care about the +1 skill value this gives I think you never take it. so probably only best in people with low Int and low will/no mystic access. (Roland banks is a good candidate for it in my book, spend those dreaded guardian do nothing actions getting clues) — Zerogrim · 255 2/8/22
Just to clear up some misinformation above - you can't refill this with Emergency Cache. From the rules: "A card cannot bear uses of a type other than that established by its own "Uses (X type)" keyword. (For example, a card with "Uses (4 ammo)" cannot gain charges.)" — tripngroove · 1 4/3/22
They mentioned you can fill this with enraptured or winds of power. It is fingerprint kit they mentioned can be filled with the emergency chache, which is correct. :) — cookiegolem · 1 4/3/22