Place 2 charges on an asset you control.

After you draw Winds of Power during your turn: Play it.

May Oya's breath guide us all.
Pavel Kolomeyets
Edge of the Earth Investigator Expansion #63. 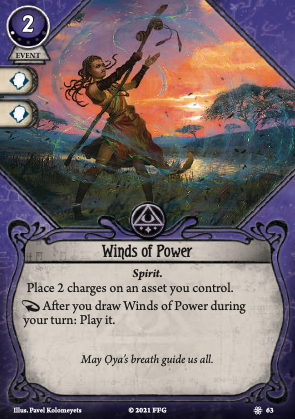 Another way to add charges, just like Recharge (2) and Recharge (4). Except this one is more reliable, costs only 1 XP, and actually adds charges to non-Spells/Relics. So far, that means Flesh Ward, and the new Close the Circle and Bangle of Jinxes. Adding charges is good, especially for expensive assets, ones with high XP, and those that are Exceptional. Akachi Onyele is a natural fit, and hey, she's already on the card. But all Mystics running powerful assets should consider this. You just have to have a spare action and resources lying around.

If you want to save that action cost, there's that juicy reaction ability if you draw this on your turn. Mystics, unfortunately aren't known for drawing cards, although you may hit this with Scroll of Prophecies or Guts (2). But you know who does have good option for card draw? Seekers and Rogues, a number of which can (and want) to take this. They also have similarly-written cards based on card draw: Cryptic Writings and Easy Mark, respectively.

If you have Seeker access, you have a lot of options for card draw on your turn. Filtered card draw is best, of course, so Eureka!, Mr. "Rook", and Old Book of Lore are good choices to find it. Cryptic Research and Preposterous Sketches are good choices, too, because you'll still need to hold onto some resources to pay for Winds of Power. Speaking of, Old Book of Lore (3), with its built-in cost reduction, will do that for you. As far as the investigators go, Luke is the standout because his Gate Box would always like charges and it starts in play. Norman Withers has powerful Mystic Spell access to drop the charges on, and can see this card coming with his ability. Daisy Walker and Mandy Thompson have the best card pool and abilities to pull this out of their deck on their turn, and their targets for charges aren't bad either: extra charges will keep Pendant of the Queen in play and have Archaic Glyphs or Archaic Glyphs last longer. Arcane Insight is also a good choice or even to combo with the previous two. As an aside, these Seekers were probably already considering running Enraptured, which also doesn't cost an action, but also doesn't cost any resources.

If you have Rogue access, your best shot is to draw with Lucky Cigarette Case or especialy its upgrade Lucky Cigarette Case (3) on your tests you oversucceed on your turn. Pickpocketing or its upgrade will help. Sefina Rousseau has all the pieces to make it work: oversucceed on Suggestion (4), draw two cards from LCC and Pickpocketing for your trouble, and hey, Suggestion even has a use for those charges itself. I'm not sure you need 5 free attack cancels from non-Elites, but there it is. Other options would be The Red Clock (2) or The Red Clock (5), but those compete with the Accessory slot. As does, by the way, the Crystallizer of Dreams, which can take advantage of two willpower icons for tests. The 0-2 Mystic spells/assets are good, too. Dexter Drake is the other investigator with Rogue/Mystic access. He'll have a tougher time digging this one out through oversucceeding, but he'll have many more targets for the extra charges. A Pickpocketing Dexter with Shroud of Shadows certainly can work! That said, Dexter's play style encourages discarding the spent assets anyways.