The Red Clock
Broken but Reliable

Forced - After your turn begins: You may take all charges here, as resources. Place 1 charge here. If it has exactly...

- 1 charge, you get +4 skill value for your next skill test.

- 3 charges, you may take 2 additional actions this turn. 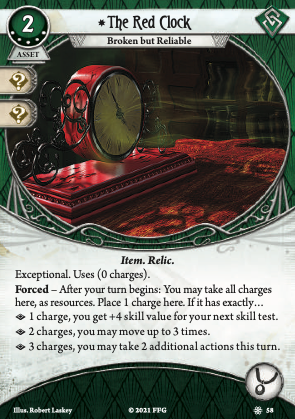 The lower level version has had some more attention since it was revealed earlier, and at level 2, has a lot more people able to take it, including any subclass Rogue, Akachi and Ursula. At 5, even Finn misses out on it, poor guy.

At 10 exp for one copy, it's hard to say what would be worth that. Even the Key of Ys doesn't really feel worth it at 10. But The clock does have one big advantage over the key; it can be upgraded from a 4xp card. So really, it isn't so much a question of "is it worth 10xp to buy?", but "is it worth 6xp to upgrade?", to which I think the answer is yes, if you can find the time, or afford it.

Compared to the level 2 version, it's the same cost, adds an icon, and all the numbers on the effects go up by one. +4 instead of +3, move 3 times instead of 2, and take 2 extra actions instead of 1. None of those are bad at all, but certainly wouldn't be worth 6xp, let alone 10. The big, hugely important change, though, is the timing point of removing charges. Instead of choosing to take or place, then checking, you get the option to take the charges, then always place. This means it ramps up to every effect one turn faster after the first cycle, and gives you an effect the turn you take its resources. These are pretty huge changes.

The Red Clock (2), if used for each climbing effect is essentially: Turn 1, get a +3, Turn 2, move up to twice, Turn 3, get an extra action, Turn 4, gain three resources. In comparison, this version is: Turn 1, get a +4, Turn 2, move up to three times, Turn 3, get two extra actions, Turn 4, gain three resources and get a +4, and continues so on. So if you use both in the simplest possible way, this version will give you a lot of extra value over longer games by simply getting the turn 3 and 4 benefits together. Is that alone worth the 6xp upgrade? Well, maybe. Generally would depend on how early you can get it into play, since you aren't actually getting much value on the first cycle, other than increased numbers.

However, the timing point changing offers a more versatile way of using the Red Clock. Instead of ramping it up, you could simply take the resource every time, giving you a guaranteed resource every turn, and +4 to the first test you make every turn. That's a very solid effect by itself. Or, you can intend to do that, and then on turns where you aren't likely to make important tests but need to move, take the move. Then after that, you can check whether you need resources and a test bonus, or extra actions. The point is, it's a lot of versatility, and you can pretty much always use one of the abilities.

Of course, there's also the argument that the real exp cost is neither 10 nor 6, but 13 (or 9), since Relic Hunter is a very important consideration for the class with such great accessory slots, some of which you'd want to try and get the Red Clock as early as possible anyway. But then we can say it actually costs 19, since you want two Cigarette Cases alongside the Relic Hunter, and that's a whole Rabbit Hole I don't want to go down. (Speaking of which, it doesn't even save exp since you pay 5 then 5 instead of 4 then 6. How sad.)

SSW · 168
Really interesting! And potentially worth 10XP for a deck that can be sure to get it out each round. You could also possibly sit at 5 actions each turn by siphoning charges with Eldritch Sophist or something. — housh · 140 10/29/21
I was gonna touch on that in the review but I'm not sure it's worth the extra exp for the Sophist trick - all you get from it is one extra action a turn, without the resource benefits or the +4s, the charge just gets moved to whatever spell/pendant you have that can hold it, just like with the level 2 version. Extra six exp just for one extra action when you're fully set up doesn't seem fully worth it to me, personally. Especially when it also requires Versatile outside of Jenny/Trish, and is unreachable for Ursula. — SSW · 168 10/29/21
If I have this card in a Preston deck, do the charges go to his resource pool and become resources or do they first become resources and go to family inheritance? I've been looking for an answer and can't find anything. — PrecariousSleuth · 8 1/4/22
@PrecariousSleuth I would argue that you keep the resources in your pool, since Red Clock instructs you to "take" the resources and Preston only cares about "gaining" resources. — Whimsical · 17 1/16/22
In a Preston deck, the extra token is a nice bonus, even if it goes on his inheritance, not directly to him. The real value of the Clock to Preston is a +4 each turn — Xelto · 6 2/23/22
3

Just a small review to say how good this card is in Jenny Barnes.

• Get an additional resource at the beginning of every round if you decide on taking it each time as you can collect the cash before placing the Charge.

• Get a +4 to your first Test each round, which brings you to 7 at least at any skill.

•• This is the equivalent of 4 resources sinked in one of your test boosters like Hard Knocks, Arcane Studies or Physical Training.

• Collect a second Charge to get 3 move actions (so no AoO if you trigger it), which is amazing to go Searching for Izzie

If you have that card in your collection while playing the Dilettante, give it a try, you won't regret it!