The Red Clock
Broken but Reliable

Forced - After your turn begins: Either place 1 charge here, or take all charges here, as resources. Then, if it has exactly...

- 1 charge, you get +3 skill value for your next skill test.

- 3 charges, you may take an additional action this turn. 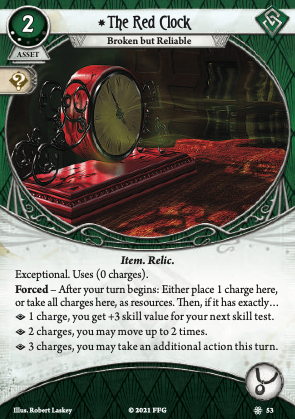 The Red Clock is interesting in that it can give you a lot of useful effects - but you'll want to play accordingly for them, since the timing of the effects may not be ideal. If you're seeing the first charge come up, here's hoping that you're in the right place to take advantage of that boosted skill check - either from a good fight, or from dealing with a harder challenge. If you're seeing the second charge come up, then plan on not moving earlier, so you can swing to the right place after. It's likely the third charge that you'll have the most luck with - it's almost always possible to find use for another action.

Many rogues can take it, but given how many tend to favor Lucky Cigarette Case in their builds, you'll want to make sure you're getting more use from it than from other cards, or are late enough that you're also able to grab Relic Hunter.

Special callouts go to those with Seeker access, including Finn Edwards, Trish Scarborough, and Ursula Downs, who can get it through relic access - as the other review has mentioned, Eldritch Sophist is capable of taking charges from this and putting them on other tools, allowing for perpetual use of it. Pendant of the Queen is probably the best use, but Divination, the versions of Archaic Glyphs and Arcane Insight can all benefit from the Seeker side access, and Blur, Suggestion, Obfuscation, and Decorated Skull can all benefit from the Rogue side.

There's also some synergy on the Mystic side, meaning it can combo in the hands of Dexter Drake, Sefina Rousseau, and Akachi Onyele, who can get it through Charge access - Mystics prefer to add charges to items, but this does mean that using Akachi's core ability/elder sign effect, Enraptured, or, if you're desperate, Recharge, you can try to manipulate the clock to an extra action or extra resources sooner. This might also be considered a source for Torrent of Power - not necessarily a good one, but it's charge-gaining nature makes it better than most, and that level of control does let you dip back down in preparation for whatever you'd like on your turn.

At a glance, I'm not convinced that it's worth 4 XP to have an exceptional item that takes up a common slot and could require more support - but it certainly has potential in the right hands.

I wasn't the one that came up with this, but consider for a moment two investigators who can take this, Ursula Downs and Trish Scarborough. They can also take Eldritch Sophist and Pendant of the Queen (which RFGs once it runs out of charges, according to the latest taboo). It's a pretty interesting one to use as a battery, because it still does its thing even while you're siphoning charges off of it. You could just keep it permanently at 3 charges to just get an extra action every turn on top of keeping your Pendant alive.

Zinjanthropus · 213
Really great sounding combo! Ursula unfortunately can't take card as it's not a relic, leaving Trish to be the sole exploiter of this combo. — shortpunch · 162 7/15/21
Its an Item. Relic. It just got put on the database as a Favor for some reason. — Xenas · 6 7/15/21
Ah! Fooled by the description... (Favor really doesn't make sense now that you point it out) — shortpunch · 162 7/15/21
Also the new "seeker" could take the sophist and the pendant. Also Jenny might be interested with an upgraded skull. — Tharzax · 1 7/15/21
Monterey Jack can, indeed take Sophist and Pendant, but cannot take The Red Clock (at least not this version) — Zinjanthropus · 213 8/13/21
Lola can also run this combo while in Seeker mode; as ChouiceE notes below, the Clock is a Forced ability so would still work. Probably not recommended as her bloated deck makes Clock harder to find plus CoI blows up the whole combo. — MindControlMouse · 14 6/10/22
3

After playing for real, I found that the 3 charges effect (free action) is surprisingly hard to make use (similar feeling to having Leo De Luca but it is just quantity not quality) and make you want to reset the clock early (take just 1 or 2 resources) in order to go for that +3 skill value that looks more in immediate need. Which if you did at 2 resources, you wished that you had done so earlier when it was going from 1 to 2 charges. So, it has more depth than I thought. +3 skill value was a happy turn almost every time. (e.g. Bob Jenkins can reliably activate Scavenging here.)

An unexpectedly good use case for that 3 charges is if your party have got those lame weaknesses that requires to fix, which any investigator at the same location can help. They often stick around for long time, creating more right moments when the clock comes to 3 charges.

You should look at the clock and plan for a meet up with your friend, especially at 2 charges leading to the extra action when you can move twice (this is kinda fun on its own lol), and then spend actions to fix it "at discount". Other than this, there are also sticky treacheries on investigator and location that you can help fix with your extra action but if it is a test (mostly?) then Rogue may not able to help that much.

5argon · 3286
Is it possible to estimate immediate need for +3 skill value? Unlike 5 level clock, there is no charge when the red clock is reset. Thus, we need 1 additional turn even if we determine reseting to get +3 skill value. — elkeinkrad · 409 1/19/22
Yeah, it is quite hard to predict. But even when you randomly reset the clock and ended up not needing it when +3 came, since it says "next test", you can try to avoid taking any test that turn in order to continue keeping the buff to the next round. (Perhaps for passing willpower treachery in the next round, or evade the drawn enemy.) — 5argon · 3286 1/20/22
You can't keep 3 charges on the clock indefinitely by the way. It's a forced "either or" ability. You either have to place a charge, or take all of them as resources. This generally means that turn 4 and beyond you're completely wasting the card (because if you took the resources you would have gotten to use an ability the next round). — drjones87 · 106 1/28/22
1

Because this card effect is written as 'Forced'(not play, commit, or trigger abilities), Lola Hayes can use this card while playing non-rogue role. Lola can also take Eldritch Sophist, Winds of Power and Enraptured to add some charge on this clock. It would be considerable for second accessory slot for Mystic Tech Lola Hayes who bought Relic Hunter, with first accessory slot for Holy Rosary or St. Hubert's Key.

I just wanted to point out what appears to be a misconception with this clock. From the artwork and flavor text, it is "broken but reliable" and the way the game handles this is once its played it does a different action in a 4 turn cycle.

Turn 1: +3 to next skill test. This starts during your turn, meaning this cannot be used on a mythos phase test. Turn 2: Move up to 2 spaces. Edit: As Zin said below this is not an action and so does not provole AOO. It is hence two free shortcuts you can use right then (but not stock). You may move up to twice immediately after your turn begins, but if you don't move right then it's lost. Turn 3: Gain one action this turn. Turn 4: Gain 3 resources.

And then it repeats until scenario end. It gives very powerful bonuses all in all, and they come at predictable times (reliable) but the clock is broken: you can't make it do what you want when you want it.

Unless you have an eldritch sophist.