After an investigator, Ally asset, or enemy at your location is defeated: Place 1 resource (from the token bank) on Decorated Skull, as a charge.

Spend up to 3 charges: Draw that many cards and gain that many resources. 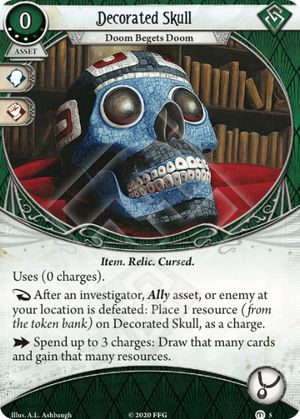 This version is quite a bit better than the level 0, as could be expected for a level 3 card. If you spend 3 charges for the first use, that gives you 3 cards and 3 resources for a total cost of 1 card and 2 actions (not including the actions to defeat enemies or your own allies, but that probably would have happened anyways), for a net effect of +3 actions. With continued spending of 3 charges at a time, you are getting a huge net +5 actions for each, matching any other economy card that I know of (for example, Hot Streak gives you a net +5 considering the card, action and 3 resources to play it), and much better than most (Easy Mark gives you +1 net action for a single one and +2 for each that is tied to the first). The combination of cards and resources is often good, because you usually need one to use the other, but sometimes you won’t want one or the other, making the effect less useful. Obviously, this is best with an investigator that both defeats lots of enemies and has disposable allies, and at level 3 it is limited to rogues, Akachi Onyele and Ursula Downs. Of these, I think Tony Morgan and Akachi Onyele are the most likely to use it, since they are the best fighters. There are some accessories to compete with for each of these, but I think Decorated Skull is a contender in the right decks.

jmmeye3 · 595
I'm playing this in Akachi through "Forgotten Age" right now, and the card is bonkers. It also combos, not competes very nice with the "Empty Vessel", 'cause I'm a relic hunter. Without the skull, I would worry, how to find the "Limit 1 per deck" card, but with the extra draws from the skull and the usual help from "Arcane Initiate" (who also feeds the skull), I see most of my deck, and sometimes even all each game. What an insane card, but the level 0 looks quite horrible to me. — Susumu · 271 12/24/20
5

This card is completely broken in War of the Outer Gods, where not only are there Swarming enemies that each add a charge to the skull when they die, but the Warring and Aloof enemies will kill each other on your location without you even having to do anything. It doesn't quite break the scenario on its own, but it is an insanely powerful draw and resource engine as just a single card, without even having to dedicate your deck to fighting,

Tony Morgan's best mate. You need money? Cards? Money for cards? Apply Decorated Skull to the problem and watch as your hand goes from 2 cards to 5 after you went BRRRRRRRRRRRRRAP BRRRRRRRAP BRRR BRR BRR with your pieces against whatever poor bastard is in your way!

Bonus points if you use Joey "The Rat" Vigil to play out the cards you got without using actions.

ironbrw · 15
Not sure; it's nice for the card draw but Tony has more money than he needs — jd9000 · 69 8/16/20
The appeal of this is definitely cards over resources. Unfortunately the base Lucky Cigarette Case outshines this easily in that department for being actionless and more consistent draw. You dont get the draw until you decide to take the action, which means you’re deferring draw you would have otherwise gotten immediately. It is possible to outpace LCC if you get a lot of death happening, and the resources might matter in a Delilah or Lola Santiago based deck, but I find this personally hard to justify the XP for. There are tons of consistent resource methods in Rogue already, like Lone Wolf, that I dont even take with Tony. Easy Mark, Another Day Another Dollar, and Watch This all on top of Tony’s bounty income already go a long way. — StyxTBeuford · 12744 8/17/20
For Tony I prefer Garrote wire + Lucky cigarette case. — AlexP · 225 3/7/21
2

Honestly just utterly confused as to why this was designed as a level 3 card rather than a level 2 one. Leo Anderson is THE investigator that would most love an upgraded Decorated Skull, and yet he can't play it. Has anyone playtested it in him "for science!" and found that denying him it was a wise design decision? I.e. would it just be too good for him? How about a hypothetical level 2 mutated version (e.g. where you can spend up to 2 charges instead, or is exceptional, or a similar variant)?

anaphysik · 83
I agree with you that it probably could have been a level 2 card. Then at least there would be a slightly larger pool of investigators who might want it. I do think that Tony likes it even more than Leo though, so it's nice that it found a Rogue home eventually. — Soul_Turtle · 102 6/14/21
This card is insane in Akachi at 3-4 players. — FarCryFromHuman · 1 6/14/21
And now with Charlie Kane, we have another ally-heavy, potentially enemy-killing tank that can just barely not take this card. I get that effect-wise, putting it at level 3 isn't unrealistic, but house-ruling it at 2 isn't unrealistic, either. It feels like a slight against investigators who would synergize well with it. — TheDoc37 · 462 1/8/23