Uses (1 charge for each class among cards you control, including this one).

Spend 1 charge and exhaust Close the Circle: Take a basic action. For each skill test performed during that action, you may use your instead of the skill indicated for that action. 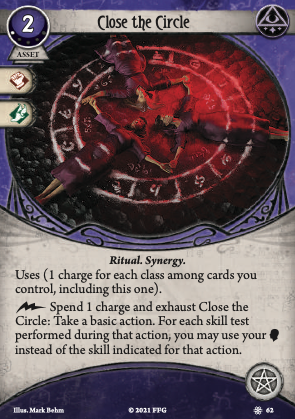 OK, you get to take additional actions, that's like having a Leo De Luca in play for a few turns with some restrictions. But actually, since you get to take that additional action during any player window, not just on your own turn, you can do some more unusual things even outside of the investigation phase. There may be some shenanigans you can pull during the Mythos phase or the Upkeep phase, but the most likely target is in the player window in the Enemy phase after Hunter enemies move and engage but before any enemy attacks. You can do a basic fight to finish off a 1 HP enemy, or evade one to prevent it from dealing you any damage or horror. Or -- since playing an event is a basic action, as long as it doesn't have a Bold action modifier on it -- you can play an event card. If you don't mind or can avoid the AoO, or if the enemy isn't going to be engaging you, then you have some great options, like Call for Backup, Sneak Attack (2), and Small Favor. Coup de Grâce, Dynamite Blast (2), Blood-Rite, Manipulate Destiny, Gaze of Ouraxsh don't provoke an AoO, and may be used for different situations.

How about using that during your basic action? Most full-time Mystics will likely use this additional action for an evasion in a pinch, since they likely have a spell or two to do damage or investigate and get additional benefits. A basic evade is probably the most common way investigators with high evade anyhow, so it's not surprising this would be most likely choice for Close the Circle. But "activate" is also a basic action, so you can use this on tests on scenario cards that are otherwise difficult. Yes, most treachery cards have tests on them already, like Dreams of R'lyeh, but Locked Door is common enough. A few of the more recent campaigns have a good chunk of treachery cards at your location or in your threat area that don't give you a option, so be on the lookout if you're trying to leverage your Close the Circle.

dscarpac · 91
Some other interesting options for that turn a bunch of Hunters move into your location and swarm you: "I'll see you in hell", Cat Burglar, Lily Chen's Balance of Body, Lantern (discard), and Warning Shot. If you somehow ended up with the Flute of the Outer Gods, that will do something, too. — dscarpac · 91 11/8/21
Lily can't buy this card due to her deck building restrictions. — Tharzax · 1 11/8/21
Yeah, not-a-mystic always gets me, but she might end up with it anyways with Black Market. Anyone can have anything now! — dscarpac · 91 11/8/21
@dscarpac Almost anything. Still can’t have other people’s signature cards! — Death by Chocolate · 1258 11/9/21
5

This is by far the most interesting of the new Synergy cards. There are a number of ways you could view this card:

When you consider that you'll often get several of these benefits simultaneously, this card seems really potent. So what are the downsides?

In summary, this card has the potential to be quite useful in the right circumstances, but requires a fair bit of support (multiclass cards and extra arcane slots) to see the full effect. It's certainly worth a look for anyone who's planning to run multiclass decks anyway -- in fact, it might even be better for off-class mystics, since their arcane slots are usually less contested.

There's one mystic who really loves this card, though, and that's Akachi Onyele. She already had access to strong out-of-class cards even before Edge of the Earth dropped and she works great with "bling archmage" builds (The Hierophant • V plus Relic Hunter plus Sign Magick) which take care of the slot problems. Most importantly, though, is the fact that this card uses charges. As a result, not only does she get an additional charge each time she plays it (essentially refunding the play action), she can keep playing it over and over with her signature. Not only does this mean she can just keep getting extra actions than usual, but she can play it early (before her multiclass cards are out) without mourning the lost charges. Other mystics might be a bit skeptical, but I'm probably always going to consider this card when building an Akachi deck in the future.

AnEnding · 6
The main restriction of this card may be that you can only use the charges for basic actions. — Tharzax · 1 10/1/21
That's a very important point, yes. I've added it to the review. Thanks! — AnEnding · 6 10/1/21
I love the Akachi synergy. Antiquary would work well to make replaying Close the Circle free. — housh · 141 10/1/21
I'd probably prefer to run prophetic over antiquary, since spells are just so much more common, and you can use the resources saved when replaying Close the Circle. I don't think either of them has more obviously useful off-classes though. — AnEnding · 6 10/1/21
Carolyn can take it, if she's running high WP. — MrGoldbee · 1315 10/1/21
Carolyn can take it even if she isn’t running high WP. The Will substitution is optional, and there are plenty of actions she might take with it that don’t even care - draw, resource, move, play... Extra actions are still extra actions! — Death by Chocolate · 1258 10/2/21
(Also activate actions without bold keywords are still basic actions, such as First Aid (3) or Hypnotherapy - both popular actions for Carolyn to take. — Death by Chocolate · 1258 10/2/21
I love that they use a rule word which is not yet defined "basic action". But what it is? Everything in the rulebook is basic actions? So play and activate too. What is not? Maybe those with double action designator? Play+Fight, Activate+Fight? — vidinufi · 57 10/3/21
Action don't provide AOO. You do take an action, but as it doesn't use up an available action there is no AOO. Its a fast effect. There is a part about this in the FAQ — vidinufi · 57 10/3/21
With brute force and the other survivor skill card from the dream eater circle they had used the working of basic actions already. But there where no misunderstandings due to their symbols — Tharzax · 1 10/3/21
It's worth trying on Patrice, I think. — suika · 8839 10/4/21
@vidinufi -- There is a definition of basic actions in the EOTE FAQ specifically for this card, but I don't think it's made its way to arkhamdb yet. They're defined as any action without a bold keyword written on a card. Using these actions actually _does_ provoke AOOs. I was wrong about this myself, but it seems like effects which instruct you to "take" additional actions implicitly grant you bonus actions which are then immediately spent. This is the same reason that, for example, Ursula's investigator ability provokes. — AnEnding · 6 10/4/21
According to https://arkhamdb.com/rules#Ownership_and_Control you control all the cards in your hand, deck and discard pile. — david6680 · 43 10/27/21
@david6680 While true, this doesn't matter since abilities can only interact with cards that are in play unless they specifically mention working with an out-of-play area. As such, this is only checking cards you control that are in play, and your hand, deck, and discard pile are not in play. See https://arkhamdb.com/rules#Ability and https://arkhamdb.com/rules#In_Play_and_Out_of_Play — Lasiace · 19 11/7/21
It feels worth mentioning that Move is a basic action, so you basically always have a use for it if you're not worried about the substitution as well. — Lailah · 1 1/14/22
Is drawing a card or gaining a resource a basic action? — yadyam · 1 6/7/22