Deal 1 damage to a non-Elite enemy at your location.

When you play Small Favor, increase its cost by 2: Change "Deal 1 damage" to "Deal 2 damage."

When you play Small Favor, increase its cost by 2: Change "at your location" to "at a location up to 2 connections away."

John Pacer
In the Clutches of Chaos #277. 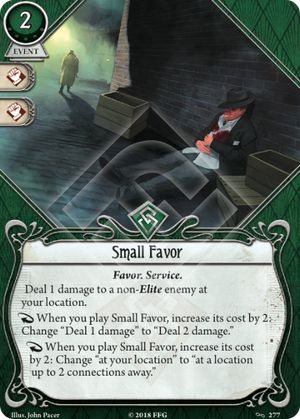 To start, the big problem with Small Favor is the lack of bold text, playing this provokes an attack of opportunity. Then there's the fact that it won't hurt elites. These points combined makes the card near-unplayable solo.

So, the unique abilities.

The best case scenario for Small Favor is a multiplayer game in scenarios where enemies tend to spawn at a distance, you play it to kill or finish enemies who spawn around your buddies or enemies who play hard-to-get. This card is very expensive for what it does, 2 damage is something you do in one action with just about any common weapon, sure the range aspect is nice but you really pay through the nose here.

All in all, A weapon will probably serve you better than Small Favor.

I cannot help but think that Small Favor should have broken ranks and had different costs or even dealt a maximum of 3 damage somehow. The other service cards are both pretty useful for their ability to give you a "double success", evading 2 enemies in one action is a useful rarity and discovering 2 clues in one action is desirable in any class, dealing 2 damage in one action is something every single class can muster with ease (except ), this means that the 1-2 damage you deal for 2-6 resources is just incredibly inefficient.

Obviously, 2-6 resources are no big deal to Preston Fairmont, I'll struggle to justify it for anyone else.

Tsuruki23 · 2205
I would disagree. I think that Intel Rapport is the best of the services, but that this probably ranks second. For the simple reason that there are enemies that don't have a lot of health but that you *need* to kill. Acolytes, or the Wizard of the Order. Paying 6 for a Wizard that spawned on the other side of the map sounds great. I also think this is a card for Preston primarily, because other rogues don't need this, but other rogues also don't need decoy. — Veronica212 · 179 7/15/19
Your points seem very valid for solo game. However in team the card clearly trumps Sneak Attack to the point of making Sneak Attack obsolete. — Eruantalon · 101 7/31/19
Sneak attack might be obsolete for Preston but the resource cost is very prohibitive to other Rogues. — Tsuruki23 · 2205 8/8/19
Dig Deep (or Well Connected or Money Talks) + Sneak Attack to me seems the way to go for this in solo. That non-Elite clause is really a killer in solo where you can feasibly evade until the big bad shows up. For testless damage against things like Whippoorwills I think Coup d'Grace is much better. Small Favor definitely has better reach in multiplayer Preston. — StyxTBeuford · 12690 8/11/19
I have a new appreciation for this card after using it with Skids in TFA. Being able to target an enemy up to 2 locations away is a huge bonus. This isn't good at all for enemies engaged with you but there a lot of enemies where this is perfect. Various aloof enemies (Eztli Guardians in TFA) show up in most campaigns. Various cultists (with doom on them) show up and you would need to spend an action to move to the location, maybe an action to engage and then take a test. There are also hunters that you either need to take a hit when they move to your location in the enemy phase or move to their location and evade them. I would still rank it the worst out of the Service cards but the others are just great. It might actually be more useful than Decoy since most Rogues boost their Agi enough that they don't need Decoy. And yes, I also have Coup d'Grace and Sneak Attack in Skids deck. — TWWaterfalls · 832 11/5/20
A great Aloof killer in TCU. — MrGoldbee · 1220 7/24/21
How to kill a Aloof guy: — BoomEzreal · 25 10/13/21