You have 1 additional arcane slot. 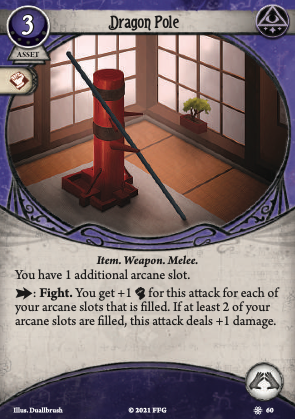 I'm cautiously intrigued. The existence of Sword Cane, Scrying Mirror, the new and improved Chthonian Stone, and the classic Grotesque Statue is going to make a two-handed asset a hard sell. Hand slots are in higher and higher demand these days for this faction. But if you're a Mystic who doesn't mind getting their hands dirty, this card is a contender.

The peak performance of this card is easy enough to spot: fill all your arcane slots and you get an unlimited +3 , 2 damage attack. Compare that to any other level 0 weapon--it's just bonkers good. For laughs, throw in Familiar Spirit to crank it up to +4. Or if you're an absolute clown, and have access to Bandolier, put a Sign Magick or Book of Shadows in your free hand for a +5 (or both/double for +6 with the upgraded Bandolier, plus a bonus +1 !). Or with access, use Arcane Enlightenment to hold Book of Shadows, then use that additional arcane slot to hold another--okay, you get the idea.

Meme builds aside...the big catch is the setup cost. Nothing we haven't seen here--it's an asset-that-lets-you-hold-more-assets which also gets-stronger-with-other-assets. And so this card suffers under the same dearth of efficiency suffered by all such cards. Say you're going for the bare minimum of getting the damage bonus.

First and foremost, the resource cost: the staff itself costs 3. I imagine you'll pretty much always want to play an investigation spell alongside, which will cost 3/3, 4/4, or 5. And with that, we've already ruled out a turn one setup without also having some economy in your opening hand. Next you may want an evasion spell to complete your trifecta of tested actions--that's another 2/2 or 3/3. Uncage the Soul is a big help for more expensive spells, but there are leaner alternatives. Alchemical Transmutation is cheap, and will help to cover the cost. Scrying is a nice bargain too.

Next there's the action cost: With the exception of Mind's Eye (2 slots), Obfuscation and Talisman of Protection (Fast), that's 3 actions to play the cards you need. A whole turn.

For both of these issues delivers some decent out-of-faction support through Ever Vigilant. In fact, I'd say that Dragon Pole is barely playable without it. It's almost as if this card was designed with a certain long-awaited / Martial Artist in mind. Cultists, nuns, or zealous chefs may be equally interested. Perhaps the clowning with Bandolier is actually viable?

My mind also turned to Akachi Onyele upon seeing this card. With her decent and her love of spell assets, as long as she can address the setup issues, she could go full battlemage with this!

All things considered, if you want to get the most out of this card, you'll need to build around Dragon Pole like you'd build a road around a sacred thousand year-old tree. I prefer to see that as an opportunity rather than a problem, though I imagine most traditional Mystics would rather stick to 2x of a standard attack spell. Of course for all we know, there will be more support for this card once the cycle is released. Looking forward to it!

To hold both Sign Magick and Dragon Pole, we just need a Bandolier(2).

To play two copies of The Hierophant • V, we simply need Anna Kaslow.

We then need to fill our Arcane Slots to get the attack boost, but luckily The Hierophant • V allows us to fill the slots with a bunch of accessories as well as spells.

So if we spend about 12 XP, draw our deck in the right order and put down 17 assets, we have an insane weapon that will fight with a whopping +8 , deal as much damage as a .45 Automatic and never run out of ammo!

At this point Conglomeration of Spheres will be the only thing that can stop us.

Clearly designed for Lily Chen. Fish it out with Prepared for the Worst, fill your arcane slots with cheap Arcane slots like Scrying, and you can get this up and running on Turn 1. Turn 1!! Unlimited uses! At 0xp! It's really good.

Scrying might seem like a throwaway spell just to enable the weapon, but with Lily and the Dragon Pole up it's actually pretty good -- you can use the combo to ensure Lily will be drawing into the nastiest brute in the top of the encounter deck for 1 action a turn, making her excel in the crowd-control role.

2 hand slots is definitely a downside, but again with Lily you can take Bandolier, so it's a little mitigated.

If your is 3 or 4, and you're considering Sign Magick, consider this instead. Dragon Pole grants an arcane slot with fewer restrictions, and also can whomp monsters without running out of charges or burning your hands.

But since the Dragon Pole largely obviates the need for a fight spell, it effectively opens up two arcane slots for two hand slots. Thus it's twice as efficient, for the same cost, as Sign Magick

All it costs is one extra hand slot.

MrWeasely · 14
You will still need the fight spells in later scenarios, when the enemies get toughter. If your willpower is 5, you get a base value of 8 on your Shrivelling (5), as you need later in any campaign. So "Dragon Pole" might be a decent weapon in a level 0 deck, but if you forgo the level 0 fight spells for it, purchasing the upgrades with AR (and possibly DtRH) get more expensive. I agree, level 0 "Sign Magick" is kind of meh, and "Dragon Pole" probably the better option, unless you want to go for the upgraded "Sign Magick" and have DtRH in your deck. — Susumu · 211 3/16/22
That's true. Cyclopean Hammer provides a good upgrade path along this line of thinking. — MrWeasely · 14 3/16/22