Forced - After you reveal an symbol during a skill test: Remove 1 charge from The Chthonian Stone. 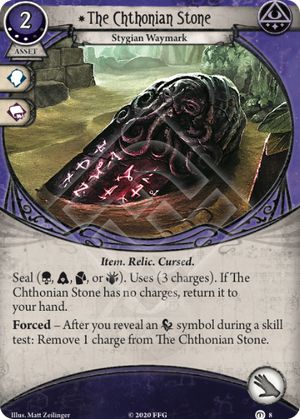 This card carries the ignoble distinction of losing the flavor text that was on the lv 0 version. Yes, the lv 3 Chthonian Stone has more print on it, but it seems like IT WAS LEFT BEHIND FOR A PURPOSE. (The flavor text, that is, not the stone.) And what purpose was that?????? They could have still fit it in at the bottom if they'd wanted to!

Three xp is a lot for a card that's not your fight or investigate spells, but for decks looking to seal a lot of tokens this is a strong upgrade. Not only is it 33% cheaper, the charges on it mean you'll have to replay it about 33% as often as the level 0 version. Combined, that's a pretty massive cost reduction for the sealing archetype. Akachi can take it even further, and anyone can add charges to it to extend its lifespan, although that effect would probably be better spent on Seal of the Seventh Sign.

I like this a lot for the decks that want it.

SGPrometheus · 688
Yeah, it's a good improvement. It's not even a bad choice even if you're not planning on doing a seal all tokens deck. Sometimes certain symbols will carry effects that are as bad if not worse than an autofail so it's a good countermeasure against those. — LaRoix · 1608 8/19/20
Those 3 charges add a lot, it makes this card useable without seal of the seventh sign. — Django · 4434 8/20/20