After a skill test at your location begins, exhaust Scrying Mirror and spend 1 secret: Perform the "reveal chaos token" step of the test now (before committing cards), instead of after committing cards. 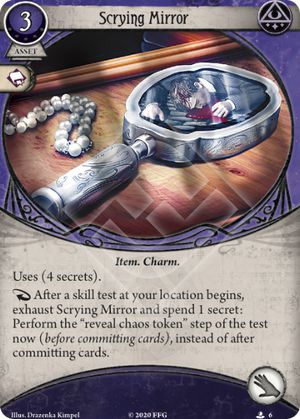 I'm a little surprised this card hasn't received better, or I guess more, fanfare. This is essentially 3 resources for 4 Premonitions which is incredibly powerful. The big drawback is that you have to decide the action you're going to take in advance rather than playing Premonition and deciding what action would be best to use the sealed token on. Generally speaking though, you'd only use a premonition on an important skill test (i.e. where the stakes are high), but the same is true here since you only get 4 secrets (but that is rechargeable through a number of cards, Enraptured in and Truth from Fiction and Eldritch Sophist if you've got access to ).

The ability to know EXACTLY what token you'll be resolving is strong, more so if you have anything that can draw multiple tokens (McBride, Jacqueline). If you're going to be just a little bit short, you now know if you need to commit a card from your hand that you were hoping to play. But obviously, that's just some useful knowledge that helps keep you from over or under committing. The real strength of the card is when you're committing skills to the test.

Unfortunately, most skills don't really need this. Enraptured will simply replace it's own secret (though you can use it to charge a spell instead), while skills like Prophesy and Torrent of Power are generally strong enough that it'd be a bit of a wasted use. It doesn't work with Defiance since you have to pick a symbol before you reveal, and even though it does combo with Defiance lvl 2, I'm not sure how useful that would be. Jacqueline's favorite augury is a great target since the effect is quite powerful, but you already have good odds of getting that to trigger so long as you're drawing multiple tokens.

Given this, probably the best thing about the card is it's lvl 0 rank, allowing it to be taken in off class s, Dunwich gators and anyone who's versatile enough. In faction it's a good little luxury/tool, but off class it's quite powerful. s like Silas Marsh and "Ashcan" Pete would appreciate it. s with Shotguns would like it, especially Zoey Samaras and the upcoming Sister Mary (which is exactly how I intend to play the nun with a gun). And Dexter Drake and especially Sefina Rousseau can abuse the crap out of all those delicious skills.

Aside from it's use in solo (which is good if a tad expensive), it's really going to shine in multiplayer where you'll be everyone's best friend. Remember that other investigators at your location can get in on the fun and commit their own cards to compound the effects. You could even double up those tokens with Take Heart and Self-Sacrifice.

LaRoix · 1608
I'll take it over Prescient any day. More uses! — MrGoldbee · 1314 9/6/20
Correction: It does not combo with Defiance (0) because Defiance (0)’s ability only kicks in if it is committed before chaos tokens are revealed for the test. This was explicitly confirmed in the FAQ in the pack insert for the Jacqueline Fine deck. However, it does combo with Defiance (2) since Defiance (2) doesn’t have the “before chaos tokens are revealed” condition that is on Defiance (0). — iceysnowman · 159 9/6/20
Right. I should have checked the rules on defiance lvl 0. I revised the review to reflect only the lvl 2 version. — LaRoix · 1608 9/6/20
I think your first point (you can't trigger it until after a skill test begins) is why I ended up being a little disappointed by this. Premonition on tap would be amazing! I think you're right that it's still good, though. There are tons of great applications, though I feel like Mystics don't benefit as much as others (outside of combos like Crystal Pendulum) because they're usually way over the test difficulty anyway. — Zinjanthropus · 212 9/6/20
Yeah, I agree with that. I play kind of overzealous in that I like to be 4 up before the pull with a way to wiggle out of an auto-fail. I get that's what every player wants, but I tend to over-commit so knowing how much of that I need to be doing is a huge boon. So maybe the card is just more suited to my play style. — LaRoix · 1608 9/6/20
I meant Premonition. — MrGoldbee · 1314 9/6/20
I hadn't paid much attention to this card since I thought it took up an Arcane slot like most Mystic assets but it is a hand slot instead. I would still consider this to be a team/support card since most of my Mystic builds result in mostly taking Willpower tests at 6 minimum and usually 8+ by the end of the campaign. I barely bring any skill cards in some of the decks. — TWWaterfalls · 862 9/7/20
3

Scrying Mirror appears to be the lynchpin of many of Jacqueline's combos, such as predicting tokens that will be drawn or the results of skill tests.

Also pairs well with Mystic cards that are all about efficiency and consistency, such as Recall the Future, Olive McBride, or all of Jim.

Aside from that, this is a very good card for skill tests on BIG cards, like your friend's Lightning Gun or Eye of Truth.

DavidRyanAndersson · 50
its dont work with Recall the Future coz text on it says "when bla bla bla" — Meranomi · 1 8/28/20
and its dont work with Defiance lvl0, coz text says that "before reaviling" — Meranomi · 1 8/28/20
You CAN technically still use Recall the Future if you trigger it before the mirror, although you are still 'guessing', but that's fine with RtF since you only call relevant tokens with it anyways. While Defiance(0) doesn't work since committing skill cards happens after the mirror and it never gets a chance to have its effect happen, Defiance(2) DOES work since its effect happens in Step 4 which still occurs later. And that could still be pretty neat. — Death by Chocolate · 1256 8/29/20
@Death by Chocolate So in Sister Mary there is no way to "tutor" your Shotgun, for example picking the Chaos Token and then deciding whether you're going to use your Recall the future/Well Prepared to make sure that you always do the right amount of damage? — Valentin1331 · 24712 3/10/21