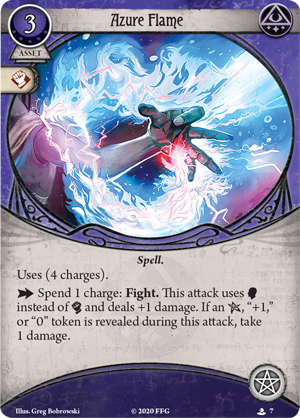 Finally, Shrivelling has more competition for offensive options on new investigators. Azure Flame matches Shrivelling in a lot of ways - It's a 3-Cost, 4-Charge Spell which uses Willpower and deals +1 damage. Shrivelling remains a mainstay in Mystic decks for a reason, and that identical core functionality means this can compete with it. The only question is, how does it stack up?

The immediately notable difference is the downside - while Shriveling hits your sanity on , , , , or , Azure Flame instead hits your health on +1, 0, or . How does that compare?

In terms of how often you hit the downside, Azure Flame comes out ahead. At first, on Normal difficulty, it looks relatively even - there tends to be a 1 token difference between the two, one way or another. However, most campaigns will muck around with the bag, and do so by adding negative tokens - tokens that always add to Shrivelling's set. This means that over a normal campaign, you will tend to hit Azure Flame less and less, and Shrivelling more and more. That's also discounting the fact that Azure Flame becomes even less problematic at harder difficulties, where +1s and 0s fade and negative tokens increase.

This also impacts its synergies to some degree. It's the middle-of-the-road option if you're messing with token effects. Dark Prophecy won't help like with Wither, but neither will it hurt like with Shrivelling. Eldritch Inspiration won't be of any use at all, and Counterspell and Defiance can only be used in their more general 'prevent a modifier' effects. There's a small amount of synergy available with the unusual seals (Shards of the Void if you're running both, Crystalline Elder Sign, and The Codex of Ages for Father Mateo). These are worth keeping an eye on if you're low on slots and need to pick between one and the other.

The other main question is if you can deal with the downside when it hits. Shrivelling hits for horror, which Mystics tend to have a higher tolerance for, and which they and may have more measures for. With Holy Rosary, Arcane Initiate and Fearless as common picks, sanity damage is something Mystics can usually take. On the flip side, regular damage is harder to mitigate, with David Renfield as the only Mystic ally with more than one.

The final item for comparison is a deck-building consideration, and will depend on what else is available when Azure Flame is eventually released. One major part of a Mystic's consideration is Arcane Research, and the bonus XP it can provide. Shrivelling has a large opportunity for upgrades, allowing you to go to Shrivelling (3) or Shrivelling (5) over two different sessions. Until we find out if Azure Flame has upgrade options, it will not be able to take that XP, which may result in some waste over a campaign.

Of course, if you're looking to have consistency with your attack spells, there's also a good chance that you'll just want to run both. Azure Flame's consistency is comparable enough to Shrivelling that it may take the place of Wither for any mages who simply needed one more attack option.

Other reviewers have rightly pointed out how this is a good card, with the backlash effect being less likely to occur on hard/expert.

However, I can't say I like the card design. Mystic have traditionally been powerhouses when they got all their spells set up, but getting there is not always that easy. I think part of the "charm" of mystics is the somewhat swingy behavior.

Before the release of this card, if you wanted to supplement Shrivelling, you had to include situational or somewhat iffy cards like Song of the Dead, Shards of the Void, Wither or Storm of Spirits. Now you can just include this. It's the equivalent of having 4x Shrivelling in your deck, and Azure Flame has all of the upgrades too. I frankly don't like this.

flamebreak · 19
Eh, I see your point but I think it's balanced. It is only theoretically better on harder difficulties. Yes, the damage will trigger less often, but you will have to compensate for more punishing tokens. And not only that, symbol tokens often come with forced negative effects even if you succeed so the incentive to not risk tech like Dark Prophecy and Olive goes WAY up on hard/expert. Finally, Azure Flame's punishment is harsher than Shriveling since it deals damage and mystics don't have health like they do sanity. It's good for Jacqueline, Diana, and possibly Sister Mary, but it's really not a good pick for anyone else, especially not Mateo or Marie. — LaRoix · 1608 1/5/21
I understand that their swingy behavior was "charming" but as the card pool grows it was inevitable that new options for all of the classes would be printed, Mystics included. Consider that none of the situational or iffy cards you list were even in the core set. — Yenreb · 15 1/6/21
Yes, but my problem is that this card is so very similar to Shrivelling. Why not just reprint Shrivelling for the Jacqueline Fine instead? — flamebreak · 19 2/6/21
2

This card has an unexpected synergy for an investigator who came out years earlier. Jim Culver, musician, can use this spell to great effect. His power lets him to treat the elder sign as a skull, and skulls as +0. But that’s different than the token.

So when Jim puts Flame into play, he’s only afraid if he draws an actual zero (on hard or expert, there aren’t any +1s in the bag.)

This makes it much better for him than shriveling, which can trigger off during a skull token even if it counts as a zero.

MrGoldbee · 1315
He also has pretty even health/sanity, as i recall. This also lets you focus your trumpet heals on encounter horror and horror from clairvoyance. — SGPrometheus · 688 7/29/21
I wouldn't call it a synergy, really, because Jim treats Azure Flame just as well as any other investigator. His power doesn't really interact with it. — DjMiniboss · 44 7/29/21
His elder sign does — MrGoldbee · 1315 7/29/21
That's fair enough, I just don't feel like it's particularly good for Jim. That's one token out of at least sixteen. — DjMiniboss · 44 8/1/21
There are not that many tokens, where "Azure Flame" (or the other Jaqueline spells) will hurt. In that regard, Jim has a significant lower chance of taking the blow, in Expert even better then Easy. — Susumu · 271 8/1/21
Take for exampte the NotZ bag. The Elder Sign is regarding these spells 1 out of 6 "bad" tokens on easy, 1 out of 4 on standard or hard and even only 1 out of 2 on expert. — Susumu · 271 8/2/21
2

A straight up competitor for Shrivelling!!

I think I personally prefer the horror suffering from Shrivelling, however as a campaign progresses the negative tokens will quickly outnumber positive tokens, especially on hard, so while Azure Flame is more dangerous, it is less likely to hurt you.

This is a brilliant card to replace or supplement Shrivelling in a spell based deck that does ALL of it's fighting with magic. It also means you can build a who is as likely as a to be able to fight completely routinely. Is the class the new ? If you have 2 copies of this and 2 copies of Shrivelling you might as well be!