Shards of the Void 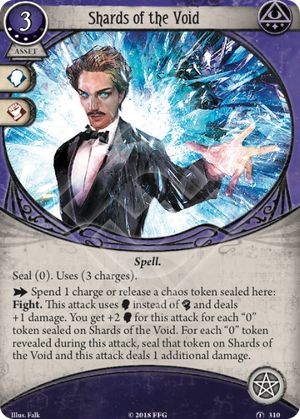 Finally, it seems that Olive McBride has found a home.

This is an interesting card. While, sealing 0 tokens is generally a bad thing to do, this card seems to have some potential. The first thing to notice about this card is that it can go with infinite uses as long as you have the right cards to support it and that's nothing to pass by. The +1 damage per 0 token revealed is also of incredible value. Depending on the chaos bag, if you manage to reveal all 0 tokens in the bag in one test, an attack with this card can go up to +4 damage!! That's nothing to lagh at!! Now, this is pretty unlikely to happen in regular circumstances, but if you use Olive McBride in conjunction with Dark Prophecy and Grotesque Statue, you 're revealing 8 tokens at once and that makes it pretty likely to hit almost if not all of the desired tokens. The question here, is whether chaos tokens that are revealed but not resolved are considered to be "revealed" for the purposes of Shards of the Void. I asked this in the Official Rules Question Form and I'm waiting for an answer.

Now, the cards to support this card are obviously cards that reveal more than 1 chaos token at once. Olive McBride is MVP here, but Grotesque Statue is also of good use and if I get a positive answer to my question, Dark Prophecy is just great. Out-of-class options are pretty limited; The only ones I can think of now are "Eat lead!" and Against All Odds, the former being unobtainable and unusuable and the latter being almost useless, short of some Double or Nothing action and only available for Agnes Baker at the moment. Now, being able to reveal extra tokens often also makes other cards more viable. Recall the Future is of serious consideration here and you could consider cards that work when certain tokens are revealed, like Ritual Candles and Jewel of Aureolus, as viable options.

Apart from the kind of "infinite charges" this card can have, the +2 or more damage is incredibly useful. 3-health enemies show up quite often and being able to finish them off with one shot is really good -it's basically like using a Shrivelling (5) without the danger of getting yourself horror- it saves you actions and skill tests. Now, you can't guarrantee the +2 damage, but given that you can "recharge" this by pulling a 0 every now and then makes this not a big deal. And in boss situations, where the +2 or more damage becomes more relevant, being able to reveal multiple 0s in one check is of incredible value and those 0s will become sealed on Shards of the Void which you may want to keep to get a great Willpower bonus for your next attack. But you will generally want to return those tokens to the bag. Probably not all of them, but most of them. I think that you will generally not want to have more and less than one 0 token on this card. You basically want to have exatcly one. To not lose the Willpower bonus and to have more chances to get the damage boost. So, if you have more than one 0 on this card, you will almost always want to use the 0 token instead of a charge. Besides, you 're sealing zeroes, hello!!

Which brings us to the one major downside this card has: The fact that you seal good tokens. Not the best, but still good. Disired tokens. Tokens that you hope to draw when you 're barely passing a test. Tokens that you definitely want to exist in the bag. And when good tokens get sealed (especially when many of them are sealed), that makes the worst tokens show up more regularly and that's really bad. So how do we overcome this?? One option is to have other sealing cards to go with this card in order to seal those bad tokens. That's actually the best solution to this problem I can think of. Another option is to actually not buy this card until your team has acquired enough XP to become stronger and be able to be passing tests at good rates. If, for example your Guardian has got a Lightning Gun and your seeker has upgraded that Strange Solution into the Freezing Variant, then that probably means your team gets along with enemies well and that's probably a good time to go for the Shards of the Void.

Now, is this card worth adding to your deck if you don't build around it?? It could be. It's basically a second Shrivelling (3). Some Mystics may want to have this in addition to Shrivelling for the same reason a Guardian wants to have 4 weapons in his deck, ie. for consistency. Is it worth instead of Shrivelling? Probably not. It's interesting though, that Father Mateo can start with 1 copy of this and 2 copies of Protective Incantation in his deck.

EDIT: I have received an answer to my question, so I decided to edit this review to include it, as well as my thoughts about the new information.

The answer was: "If a token is canceled or ignored in its entirety, it does not count as having been revealed. So let’s say you use Shards of the Void to attack an enemy and then played Dark Prophecy. Dark Prophecy reads: Reveal 5 chaos tokens instead of 1. Choose one of those tokens with a (skull), (cultist), (tablet), (elder thing), or (autofail) symbol to resolve, and ignore the rest. (If no such token is revealed, choose any one of those tokens to resolve, and ignore the rest.)” The tokens which are ignored do not count as having been revealed. The one token that you choose to resolve is the only one which is considered to have been revealed.

So to continue the example, if you revealed the following 5 tokens (Skull, Skull, Tablet, 0, and –1), you would choose one symbol to resolve and ignore the rest. If you chose to resolve the Tablet, for example, then the Tablet is considered to have been revealed and the rest are not, because they were ignored in their entirety. If you chose to resolve one of the Skulls, that Skull would be revealed but the other Skull would not."

That means that Dark Prophecy is completely useless for Shards of the Void and Grotesque Statue loses some of its value because you can't reveal and resolve two 0s with it. That also means that you can't hunt down for 0s using multiple effects that reveal multiple chaos tokens at once because not all of those chaos tokens can be resolved. The only way to actually reveal and resolve more than one 0 is through Olive McBride and that's only if you get lucky. Damage cap for this card also becomes up to +3. Which is still good but a lot less possible to achieve.

After receiving this new information, I think this card loses a lot of its value. You can still recharge it by pulling 0s, you can still achieve the +2 damage at times (+3 if you get lucky), but since you can't hunt down for 0s in a time of need by using multiple effects that reveal multiple chaos tokens at once, I think it becomes a lot less of an insurance. Anyway, I think it's still playable, just less effective.

matt88 · 1597
Thanks to this game being co-op, whenever some power player tries to seal the 0 token multiple times and combine with other token management cards ad infinitum, his teammates (usually his wife) will put him back in order. — mitsotakis666 · 1 11/24/18
Yet there might be some hope for the train of thought explained here, especially if someone devises a relevant app. The name of the app is already obvious: shards of the void management for couples! — mitsotakis666 · 1 11/24/18
It's been pretty good in my Carcosa run as Agnes as essentially my third and fourth copies of Shriveling that don't deal me horror if I draw a funny token. — Katsue · 8 12/16/18
totally agree that the ruling causes Shards to lose a lot of value. I went from "I bet Shards could work really well" to "this...is kind of unplayable". You're going to do 1 damage almost every time and you get about half the charges of Song of the Dead. I don't see how this will ever work properly, and it's certainly not on par with Shriv[3]. I can't believe this costs XP. — PureFlight · 591 12/20/18
oh wait its base 2 damage. I guess its fine. — PureFlight · 591 12/20/18
Anyone know how shards of the void interacts with Jim? Can the skulls be sealed because they are treated as zeroes? — Gyara2020 · 1 3/30/19
They skulls can probably not be sealed, as Jim only treats them as having a different modifier. It's still a skull token. — Nils · 1 4/29/19
Re: "revealed" and "ignored" tokens ruling... if it follows the ruling on Grotesque Statue: If you use Grotesque Statue to 'ignore a chaos token', treat it as if you've never revealed that token, for purposes of effects that trigger if a specific symbol is revealed — magistrix · 1 7/3/19
4

To understand this card, first you need to compare it to Shrivelling (3). The cards are extremely similar. The advantages of Shards of the Void are

However, that doesn’t mean it doesn’t have a clear purpose. You don’t take Shards instead of Shrivelling. You take it because you are only allowed to take 2 copies of Shrivelling, and having only 2 combat spells in your deck is not a lot. If you decide your character wants more combat spells, you are going to have to take a combat spell which is inferior to Shrivelling, and by that standard Shards is looking like a very reasonable choice. It is still an accurate attack that does a reliable 2 damage and has a good number of charges.

Shards of the Void is meant for the dedicated combat mage who needs multiple attack spells. And once you have Shards of the Void, you want to be aggressive with it. You want to run around helping the party by taking on monsters, so you can use up the charges and return the 0 token to the bag. The last thing you want to do with Shards of the Void is to play it as a “just in case” defensive card, then go off and do other things, leaving it in play for a long time while it eats away at the effectiveness of every investigator.

ChristopherA · 23
I think this card is really something to consider if tou play Agnes or Akachi as a dedicated combat mage and you run it in addition to Shrivelling, especially on standard difficulty. If shrivelling is in play too you could use it for weaker monsters and as its first use just release the 0 token. Then you lose the willpower bonus but if you have Agnes or Akachi and hopefully Holy Rosary in play you still have willpower of 6 which should be enough to fight most enemies. If shrivelling is not in play than that card is a nice backup plan. — Pgpgpg · 2 10/5/19