If this test is successful, draw 1 card for each point you succeeded by, to a maximum of 5. Shuffle each weakness drawn by this effect back into your deck without resolving it. 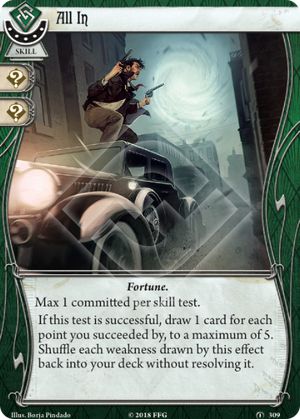 So for me the obvious comparison for this card is Cryptic Research, as they are both high XP, fast sources of card draw.

Cryptic Research has the advantages of being guaranteed card draw and costs one fewer XP. All In has the advantages of being able to draw you more cards in the best case scenario, not being able to draw weaknesses, and having two wild skill icons. 5XP is a lot to pay for an Unexpected Courage so I imagine this is mostly going to be used on easy skill tests to try to draw a bunch of cards, but there's always the option to commit it to a difficult test that you have to succeed, so I suppose its an upside.

Personally, Cryptic Research has never quite gotten there for me, and I never find myself with enough spare exp to justify running it. In theory, Rogue's should have even less spare exp floating around, so if this is really just the green Cryptic Research then it's terrible, right?

Well, maybe... but probably not! I don't think All In is a card that you can throw into a random late campaign rogue deck and expect to get value out of, I think this card is actually a big pay-off card for the "Succeed by Two" archetype. The ideal combo turn for the succeed by two deck looks something like.... find an easy test like a low shroud location or low fight enemy, attempt it and commit some combination of Watch This, Quick Thinking, Double or Nothing plus whatever cards you need to feel confident in over-succeeding, and then gain a bunch of extra actions and money and maybe a card if you had Pickpocketing or a Lucky Cigarette Case.

With the +2 this card gives you to the test you can reasonably expect to be drawing 6-8 cards off your big combo test, even on hard or expert. What this does is let you add a huge injection of cards to that combo turn, which can then let you really get maximum use out of all those extra actions, and then end your turn still with a full grip of cards to let you combo off again next turn. This is all of course very risky as drawing the Tentacles on your big test can ruin your entire week, maybe you can convince your friend to play mystic....

birdfriender · 173
personnaly, I can see this card as a late game purchase for any rogue running charon's Obol so that they can get their good toys like golden pocket watch, lola santiago, sleight of hand + lupara, lockpicks, hot streaks, sure gambles.... Basically spending your XP on consistency rather than other xp cards that you might not see — aurchen · 1 12/16/18
I don't think this card has to be part of a big combo. Getting 4 or 5 cards out of it is reasonably good. Card draw is useful in any deck. I have found myself spending actions to draw cards in order to find important assets a lot of times and get really frustrated when I happen to stumble upon one of my weaknesses when I try and this card helps a lot with that. Now, you have to be oversucceeding by a lot in order to get good value out of it (Daring Manuever helps a lot with that if you 're running it) so my guess is that you will probably bumping resources into Streetwise, so it's not really of an early game card. I think it's generally a good upgrade for any Rogue if you 've already acquired your most important XP cards and it should be pretty good on decks that run Hot Streak. — matt88 · 987 12/16/18
I definitely agree with both your points, my review wasn't meaning to suggest that the card is only good in combo decks. I was just outlining how it can really shine there. As I said, I think it compares roughly to Cryptic Research, which is a solid card for decks with an excess of exp and I think that All-In performs the same role in Rogue. — birdfriender · 173 12/16/18
Well, "roughly" describes that well. Cryptic Research might also be part of your build, since it helps a lot for Higher Education. — matt88 · 987 12/16/18
Yeah, it can be. But for me I always find the upgrade to Cryptic Research from Preposterous Sketches to be a luxury, I expect more so once the exp version of sketches is released. — birdfriender · 173 12/16/18
I don't really like Sketches tbh. The clue ristriction can be annoying. I prefer Lab assistant, which also has an effect that is useful to Seekers, so I lean more towards Cryptic Research there. — matt88 · 987 12/16/18
@birdfriender You mention that you're going to draw 6-8 cards with this for a combo deck, but All In has a maximum of five cards drawn, and one copy committed per skill test. Is there something about the combo I'm missing? — cb42 · 21 12/17/18
@cb42 the 6-8 cards is assuming a Double or Nothing combo turn — birdfriender · 173 12/17/18
@birdfriender Sorry for my confusion. That makes sense. In practice, Double or Nothing has only ever sat in a Rogue's hand during games I've played, so I failed to consider it. Thanks for clearing up my confusion! — cb42 · 21 12/17/18
Does All In work when played on other players tests? Or do you only draw cards if YOU suceed on the skill test? — Daerthalus · 4 5/4/19
This card is bonkers! All In + Double or Nothing lets you draw up to 10 cards from one test; if you have 2 copies of each in your deck, and can get its total card count down to 20 (not including weaknesses), you can effectively draw through your ENTIRE DECK in two actions. Repeatedly. You can trigger 2x Quick Thinking, 2x Swift Reflexes, and Ace in the Hole every turn. You can get Payday payouts in the double-digits every turn. The horror penalty for cycling your deck can be absorbed with a single Composure card--with the right deck, this card can enable infinite action loops. Until it gets on the Taboo List anyway. — Setzu · 201 5/7/19