Fast. Play when you perform a skill test with a difficulty higher than your base skill value.

Reveal X additional chaos tokens for this skill test. Choose one to resolve and ignore the others. X is the difference between the test's difficulty and your base skill value.

Anders Finer
Heart of the Elders #202. 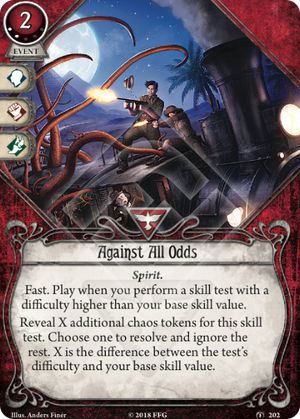 Am I missing something? This seems like an underwhelming card even for Calvin Wright, whose base skill values are all 0, and completely useless for anybody else.

The ability to draw just one extra token for a card and two resources isn't exactly a bargain, so you'll want the difficulty to be at least two higher than your base skill. A few problems with that:

So if Against All Odds isn't a good way to win skill tests, what is it good for? Maybe it would be worthwhile if:

The former possibility doesn't really work right now. There aren't any symbol-specific effects so good that they're worth playing this card for a slightly improved, but still slim, chance of drawing that specific symbol.

The latter possibility is interesting but I don't think there are any cards that can take advantage of "failing harder" at the moment - and certainly not well enough to justify 2 resources and 2XP. On top of that, the minimum adjusted skill-value is 0 anyway, so what you'd really need is an effect that plays off of large negatives on the skill token itself, like Sure Gamble. Except also not like Sure Gamble, because this would be a stupid way to use it and your investigator probably isn't even eligible to buy both cards anyway.

So what about for Calvin? Well, it's mostly just a drastically weaker variation of Will to Survive. Sure, you can't use Will to Survive on Treachery cards, but there are all sorts of Survivor cards that do work in the Mythos phase, which are both cheaper and more reliable.

Do you see how badly this is wracking my brain? Even my most feverish hypotheticals are riding a long trail of "even if" before I can arrive at a slightly useful application for this card. Bottom line, I might include Against All Odds in a Calvin deck if its combined XP and resource cost were less, and wouldn't include it in anything else even if it were free. Someone please tell me what it is I'm missing.

sfarmstrong · 241
No, I'm with you. I think this card is really bad in everyone outside of Calvin, and not that amazing in Calvin. — CaiusDrewart · 2403 9/5/18
Now, there might be some late-campaign scenarios where you know in advance that a really hard but really important test is coming up, like the Will (6) test in The Devourer Below. But this is pretty niche, and in any case Survivors have better cards for that, like Stroke of Luck. — CaiusDrewart · 2403 9/5/18
Against All Odds is one of the few cards that protects from autofail, although you need other bonus (static or not) to boost your skill and actualy pass the test. — Okami · 40 9/9/18
Worth noting that Silas Marsh is now a survivor with both <3 willpower, an exceptionally strong Eder Sign Effect - and very capable of commiting +3 to a skill test. The fact that this costs resources might be an issue though, but maybe not enough of one. — Death by Chocolate · 796 9/20/18
FIreaxe Pete or Fireaxe Wendy against retaliating elite enemies. — FBones · 12941 10/18/18
It depends on your difficulty. On easy or standard, I probably wouldn't bother with this card. But on Hard mode, this card is a way better way to spend resources than just using them with plucky or scrapper. Being 3 over a 4-difficulty test on Hard Phantom of Truth gives you a 79% chance of success. Being 1 over and spending 2 resources on against all odds gives you an 89% chance of success, similar to how spending 1 resource on lucky is worth spending 2 resources with other stat boosters. — xeynid · 21 5/28/19
Revisiting this now, Preston could use it well. Double or Nothing and (double) drawing thin a test and you’re increasing it’s difficulty enough to go fishing for his elder sign, then you pay to succeed. Especially useful for a really important difficult test in a scenario he’s never going to pass. If you take the resources off two drawing thins, it doesn’t even cost anything. — Blurbwhore · 1 7/14/19
I don't think you understand this card properly. Base Stat is most of the time the printed stat. A Calvin with 4 Strength from its ability will have a 0 base Strength, so against a 4 combat monster you will draw 1+4 chaos tokens because of this. The same could be said of bonuses from weapons and assets. This is a really good card. — Ratadin · 1 1/11/20
3

I tried with Preston Fairmont already. It always be the dead card. It's hard to use effectively. Because you need 2 Drawing Thin and a Double or Nothing to guarantee success.

AquaDrehz · 164
I don't understand your point. You don't need to make the test more difficult to use this, you just need a find a test with a difficulty of 2 or greater. It doesn't guarantee success, it just makes it easier. — Sassenach · 138 1/31/20
I think he means using Double or Nothing + Drawing Thin to make a test so difficult that you reveal every token in the bag and then spent the two resources as Preston to automatically succeed with his Elder Sign. Which honestly sounds pretty good, as it's an autosuccess on a Double or Nothing test. That could be 4 damage on Fire Axe or 2 clues, plus any number of extra effects pitched in by the group. Preston also can't take Eucatastrophe, so this would be his closest option. I never thought of combining it with Drawing Thin, but that's a cool idea. — StyxTBeuford · 12473 1/31/20
Ah yes, I see what you mean. In this case though you'd have sent 4 resources for 1 auto-succeed, so it had better be worth it. In most case it probably won't be. — Sassenach · 138 2/2/20
Although... since you need to trigger 2x Drawing Thin to make this work then its effectively a free auto succeed, so maybe it is worth it. Could also work with Wendy, but it would be harder to trigger. — Sassenach · 138 2/2/20
Yeah DT pays for it, also the idea was to be Preston anyway — StyxTBeuford · 12473 2/2/20
Thanks, folk. I forgot that Preston can get it. This card is suck. But it's the best best he can get. — AquaDrehz · 164 2/2/20