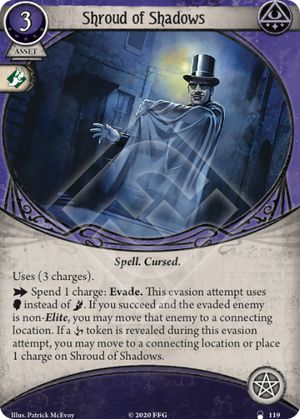 Shouting out this card necessarily because it's super exciting (though it kind of is, even besides the curse synergy the fact you can kick a monster out of a location is something Mists of R'lyeh can't) but because at time of writing the page for this card has a broken Bold tag and I'm giggling at it because I'm incredibly immature.

I think I'd take this over Mists even if I wasn't going in on curses.

The fourth set of "will replacement" assets, Armageddon, Eye of Chaos and Shroud of Shadows.

The other sets are:

Shrivelling, Rite of Seeking and Mists of R'lyeh.

The similarities between the spells above and this new "cursed" spell set should be plain to see. however, ironically, the "cursed" spells dont have penalties for finding tokens, they are in fact a little bit more expensive, but in-turn they're safer and have bonuses on there!

Well. Safer is perhaps a wrong way to describe it, because playing with is plenty risky in of itself.

In order not to overcomplicate these reviews, I'm assuming you already know how good it is for characters to replace their into tests, pretty much every deck packs in several of these cards, sometimes doubling up for the sake of consistency (a clue focused taking both Rite of Seeking and Clairvoyance for example). This is the way to go for most mystics, with some rare and specific exceptions.

So why would you go for the cursed set?

The cards come hardwired with a higher cost, and a risk -> gains mechanic for tokens, so obviously you'll be plying the risky waters of in a bid for more power. Try to pack in some of the obvious combos to get running on that archetype, Favor of the Moon, generators wherever you can get them (a bit of a rarity in the card lineup, so look to your off-class cards or friends to do that with you).

The unique bit of Shroud of Shadows to move enemies around is arguably the -most- unique in the trio, enemy moving is rather rare and you can use it to dump non-hunters into places where they'll never bother you again, if it's a hunter then given the bursts of movement happening in the final stretch of a scenario means that you might be able to leave a nasty hunter in the dust behind you, especially if you trigger a free move as well. Because of the sheer usefulness of the enemy movement, this spell is perfectly usable outside of a build.

Dont forget, you need to actually beat the penalties so an even higher baseline of than usual, with Relic Hunter and multiple copies of Holy Rosary and/or Crystal Pendulum to launch your starting point into the stratosphere.

Lastly, remember to pack a bit more resources than usual, you dont want to be too impoverished to play or run your assets!

Is this way ot playing better than the older variants? I dont think so, especially on hard where penalties can be straight up untenable, but if you're able to consistently flex tokens and overcome the penalties you'll certainly be a bit more powerful, but those are big IF's.

It is very interesting that if a curse token is revealed (and the enemy isn't hunter) you would effectively "evade" him anyway, even failing the test. I am still not sure if a Mystic should change a investigate or fight slot for a evade one, since I never tried Mists of Rlyeh, but is a interesting alternative.

Venti · 1
The enemy would move with you, so the curse token doesn't really evade it unless you succeed. — davilimap · 263 11/17/20
Yeah, if you move while an enemy is in your threat area it remains in your threat area and thus moves to your new location with you. That said, you could use this to get away from Massive enemies. — Thatwasademo · 44 11/23/20
Or closer to your Fighter friend who hasn't taken his turn yet so he can engage and kill it. — benevolentgamemaster · 1 9/24/21