After an investigator at your location performs the "reveal the chaos token" step of a skill test, if both a token and a token were revealed during that test, exhaust Paradoxical Covenant: This test automatically succeeds. (Remove each and token revealed from the chaos bag after this test ends.)

Tiziano Baracchi
In Too Deep #120. 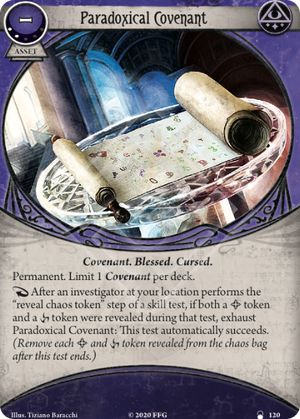 Best combo with Olive McBride. Olive helps to find both and and Covenant prevents Olive's penalty, resolving 2 tokens. Note that after you trigger Paradoxical Covenant, you don't need to reveal additional tokens for revealed & . Of course, you could trigger Paradoxical after you reveal all tokens; but, Paradoxical is auto-fail.

Here is probability table for Paradoxical Covenant. This table assumes that the bag has 16 tokens and no reveal another token effect. Row is the number of bless tokens, and column is the number of curse tokens (or vice versa).

Additional note: Unlike Olive, Jacqueline Fine has less effective. This is because both & have "reveal another token" effect, and Olive resolves two tokens, so that Olive could trigger Paradoxical if she reveal both from first 3 tokens, but Jacqueline doesnot.

Now with Favor of the Moon and/or Favor of the Sun, this covenant is incredible. Because you reset to step 3 after every token draw, you don't need to trigger the pact(s) when you initiate the test; you can draw normally, pull a bless, and in response tap favor of the moon to plug in a curse and auto-succeed. If you're using Moon, you even net a free dollar out of it. It's Father Mateo's best friend, who can use the combo to succeed on any test almost on-demand in spite of his mediocre stats.

As a bonus, it applies to everyone at your location, making it equally valuable to any Eye of the Djinn-specced rogues or Spirit of Humanity-wielding survivors. Preston Fairmont and Calvin Wright can throw themselves at impossible tests, drop a Signum Crucis and still succeed.

Finally, the combo further stacks with Tempt Fate. Anyone can take it to thin their deck, add 3 & 3 and someone with Favor of the Moon can immediately seal the curses. 3 blesses in the bag (and a full moon pact) for completely free, better even than Keep Faith.

CombStranger · 195
Mateo especially is better served with Ancient Covenant, simply because theres very few tests you can't pass with a +2. — suika · 8839 6/20/21
I also think Ancient Covenant is normally better, except two cases. First case is curse-spell; you can gain both curse bonus and test success. The other case is Olive; you should resolve 2 tokens with Olive, so that you should resolve one more token even with Ancient Covenant, but Paradoxical don't. — elkeinkrad · 410 6/21/21
Honestly, as far as combos with Mateo and Favor of the Sun go, I'd rather have Blessing of Isis just so I can get the additional action/upkeep. Then, of course, stick with Ancient Covenant to find successes while you're setting that up. — Thatwasademo · 44 6/27/21
1

I'll be honest; unless I'm just bad at math & probability - this card is almost impossible to resolve naturally. I guess it's expecting you to lean into cards like Premonition, Grotesque Statue, The Chthonian Stone etc - to manipulate your odds. I'm just not sure I would want to dump 2 XP and a load of other cards in order to make it work. Am I missing something here?

Othello · 2
I love the fact that this card is both blessed and cursed simultaneously — snacc · 876 11/7/20
so dunwich starts with 15 tokens, if you have 10 blessing and 10 curses you have a 20/35 chance to draw either a bless or a curse, then a 10/35 to draw the other type you need, sure not likely (hovering at what, 2/9 chance on any draw) and pretty hard to set up such a flooded bag but it is 2xp you didn't have to draw, only exhausts when you know for a fact you need it to and trigger on any token pull at your location, seems like without much support you'll have this trigger once a game (and 2xp to turn a failed test into a succesful test with no support seems fine) — Zerogrim · 262 11/8/20
realise I am mistaken above, the second pull is actually 10/25 in that example because drawing another curse token just means you keep drawing, so you can the odds up to 22% in dunwich, on any draw, though some of those draw are going to pass anyway, be nice to see how oftern it actually works in a real game. — Zerogrim · 262 11/9/20
Olive MacBride and Jacqueline Fine BFFs could get some use out of this. — LivefromBenefitSt · 937 11/9/20
So does resolving a bless/curse token take you back to the reveal a chaos token step? If not, then this card will be near impossible to pull off. You have to trigger this during the "reveal chaos tokens" step, but this will usually be only 1 token, even if you draw a bless/curse token. That token won't resolve until the "apply chaos symbol effects" step, which is when you would draw an additional token. — eapfel · 5 11/10/20
Okay never mind, I finally dug up the answer. It does revert you back to the "reveal a chaos token" step. — eapfel · 5 11/10/20