Add 4 tokens to the chaos bag. 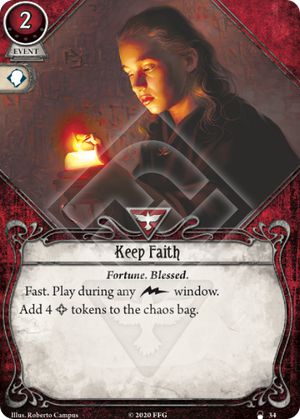 Play this immediately before Rite of Sanctification in William Yorick or Tommy Muldoon, then enjoy the great economy. At some point you will stop needing the resources, but you can pay for your friends' cards, so this combo remains useful forever.

Big Iron · 83
Also works in Father Mateo. — The_Wall · 189 10/3/20
With 'On Your Own' this costs 0 and is fast. Seems like an auto-include for that archetype. Having a lot of fun with it in my Ashcan Pete deck going through forgotten Age.. — Calprinicus · 2205 10/5/20
Wendy loves to play it twice! — MrGoldbee · 516 10/21/20
I'm eager to try this instead of Live and Learn in my solo Ashcan Pete deck. Con: Keep Faith is better early, and I would never mulligan for it when I really want Magnifying Glass, Peter Sylvestre, probably a Leather Coat or Bulletproof Vest, and maybe a Fire Axe. So at that point, I'd be counting on Keep Faith to come up early enough that it's impacting a large number of chaos bag pulls, but not so early that it's getting mulligan'd away. But compare to Live and Learn, which (for me) doesn't work all that well in practice - since you have lost whatever skill cards are committed to the test (unlike in Lucky), it has limited use on tough tests, and since you still suffer the consequences of the loss (again, unlike Lucky), it's useless against most treacheries. I'd maybe rather take a chance on having a bunch of +2s that might come up randomly compared to a single guaranteed +2 that's useless on harder and more consequential tests. This also aligns with the fact that some scenarios get tougher as they proceed, either by design (like a boss fight) or by nature (when time is running out, there's less margin for failed tests)... so even if you don't get the Keep Faith very early in the scenario, you're increasingly likely to get it as you approach the point in the scenario where you're more likely to need it. — mpinzur · 1 11/9/20
1

A Preston blessing deck is extremely viable, based on ancient covenant getting you to +3 when you need it. And this card is the cornerstone. Unlike most characters with survivor access, cash aint an issue when it comes to playing it. Use resourceful on other investigators test to recur it.