Seal (up to 5 ). If Rite of Sanctification has no tokens sealed on it, discard it.

When an investigator at your location plays a card, exhaust Rite of Sanctification and release a chaos token sealed on it: Reduce the cost of that card by 2. 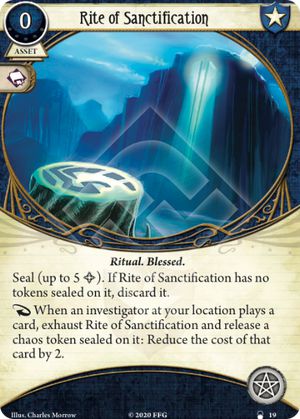 So this may be one of the strongest cards ever printed for yorick, lets go down the list.

Takes up an uncontested slot check

Pays for every other card in your deck check

If you only get 1 blessing in the bag this still reads as 2 resources on his ability that can be looped basically forever, once you spend all the blessing the rite goes to your discard pile where you can just replay it until every enemy is dead.

If you go from tempt fate or keep faith into a 3/4 blessing Rite, yorick instantly becomes the fuel for your entire teams assets.

I am constantly struggling in my yorick decks to find ways to even spend my money anymore, no amount of high cost assets seem to be enough to drain the pool.

If you are a fan of the gravedigger then 10/10 I endorse this combo.

Play this immediately after Keep Faith in William Yorick or Tommy Muldoon, then enjoy the great economy. At some point you will stop needing the resources, but you can pay for your friends' cards, so this combo remains useful forever.

Guardian economy in an uncontested slot? Because let's be real: nine out of ten times the investigator who needs the most help offering for their assets will be the guardian. In a Sister Mary deck this feels like an auto-include, since it only needs two tokens sealed to beat Emergency Cache, with the potential to far outstrip that in terms of resources generated. It remains to be seen if someone like Roland or Yorick will be provided enough tools to stuff the chaos bag with bless tokens and make this reliable.

It also remains to be seen if someone like Carolyn or... Skids, I guess? could make use of it as a support tool for the other members of the team. I can't really think of anyone else who could take it (besides Dunwich, and it's probably too niche unless they're going full bless) and not really need the economy; Diana can take it but she wants her arcane slots, and there isn't a seeker/guardian that I know of, or a minor guardian other than those above. Correct me if I'm wrong.

So the power here depends on whether I can load the bag with bless tokens while fighting, moving, and protecting my allies; if I can (or if I'm Mary) it's arguably better than emergency cache. If I can't, it's probably a miss.

Final note, it can't go under SttP, but that's a pretty minor hit. Excited to see it in action.

SGPrometheus · 687
I think your analysis is correct. I'd just add that we do have a Seeker/Guardian in Joe Diamond. If we get any Insight Blessed cards that would be a very interesting add to the Hunch deck. Aside from that, I have a feeling Father Mateo will be able to utilize the Blessed Tokens very well if all the cards related to them use the Blessed keyword — DavidRyanAndersson · 50 8/25/20
Would Tides of Fate be a cool combo with this? Because the [bless] tokens aren't in the chaos bag they couldn't be replaced with [curse] tokens right? — Vyr · 7 8/26/20
Vyr - Was thinking the same thing, especially for dealing with Sister Mary's weakness. Also looks like an effecient way to research the Cryptic Grimoire. — agentwestmer · 1 8/26/20
Joe Diamond! I knew I was forgetting someone. As you say, if there are insight cards that add bless tokens, this will be a natural fit. — SGPrometheus · 687 9/7/20
Carolyn loves it with Psalms. — MrGoldbee · 1313 10/6/20