You may commit Predestined to any type of test. 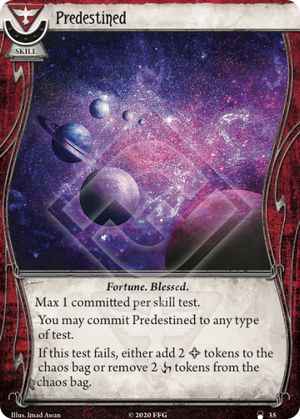 This is a failure card that the queen of failure, Stella, only wants in certain circumstances.

Here’s when it’s most useful:

-You’re playing with characters who put a lot of curse tokens in the bag,

-You’re in a big group and other people will be using the bag enough to drain the blesses;

Probably not the best pick, but Silas can make good use of this card. Throw it in the boost card at a skill check. If you succeed, take back the predestined. If you fail, take back that useful skill card. With ancient covenant, each of those tokens might be a future success. Predestiny indeed.