If a token is revealed during this test, you may remove Beloved from the game to replace that token's effects with the following: "You automatically succeed. (Do not reveal another token. Return this token to the chaos bag after this test ends)."

Love is perhaps the strongest spell of all.
Derek D. Edgell
The Innsmouth Conspiracy #36. 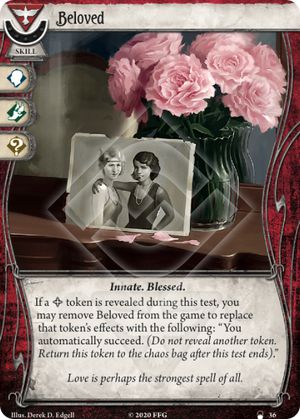 What was once simply a Toni Morrison novel is now an interesting pick for Silas.

My starting assumption is this: if you’re running a bless heavy deck, you probably have sister Mary.

(Predestination is not gonna fill up the bag unless you’re cycling it with resourceful.)

Now, Silas can give this a shot once a turn, hoping for the token, withdrawing if he doesn’t get it. It’s not the most efficient use of his time, but there’s no action loss involved.

The wild symbol is what makes it truly neat. Let’s say you’re using Olive McBride, a scrying mirror, and/or Jacqueline to look at multiple tokens. (Premonition also works.) You can play this on a teammate to make them automatically pass a check, something that would otherwise cost a lot of XP (or four resources). And with the wild symbol, it can apply to any skill. One of the ridiculously high ones in the circle undone. An evade of a brutal monster in the Yucatán. A sawn-off blast with double or nothing.

Sure, it takes a lot of time, effort, and you can’t do it alone. That’s how you know it’s love.

Edit: Now that we’ve seen the pact of the sun, this card becomes “use ancient covenant another time this turn, but a tad better“.

MrGoldbee · 1172
Auto success counts as success by 0 so it doesnt work with "succeed by X" stuff like any shotgun. — Django · 3892 10/5/20
That's incorrect. Autosuccess makes the difficulty of the test 0, you succeed by whatever your skill value is. So if your investigating a 2 shroud at 3 intellect, commit this to boost yourself to 4, and then draw a bless, you succeed by 4 because that's your final value against a difficulty of 0. — StyxTBeuford · 12620 10/5/20
I don't think auto success does count as a success by 0? It counts the difficulty of the test as 0, but that's different , right? And the example in the expanded auto-success rules, regarding Hope, explicitly says "However, the skill test still takes place. Cards may still be committed to the test, and the investigator’s total modified skill value is still determined, as it may have some bearing on other card abilities. " — bee123 · 24 10/5/20
This card (and Favor of the Sun) is great with any "succeed by X" cards, like Shotgun. For most Guardians you're getting the guaranteed max damage just by playing this. — Jaysaber · 6 5/29/21
3

Did a little math with a few sample bags:

Let's say unexpected courage gives you +25% chance to pass a test (going from say +2 above test to +4 on hard difficulty), and Beloved gives you ~1/2 that for a fight or int test with just its icon. The added benefit of beloved's ability is unfortunately pretty low, generally only about 5%, even with 10 blessing tokens in the bag. So Beloved only gives you +17% chance to pass the test vs UE's +25% chance.

Note that going down to 6 or 7 blessing tokens in the bag doesn't make that big of a difference.

The value goes up a lot if you aren't likely to succeed at the test, but not by that much unless you are taking tests with <50% chance to succeed. If you're taking the test at +0 before you commit skill cards, the value of Beloved's ability goes up to ~10%, still not as good as UE.

I think the card still has a little value but it's niche. It keeps the bless tokens in the bag and it's a little better than UE for head or foot tests. UE doesn't make it into most of my decks these days anyway though it does in Patrice and Silas.

So +2 to will or dex, +1 to anything else and if you reveal a blessing you don't chain it on and empty the bag of more blessings.

If you have a lot of blessing in the bag then this card is good for saving them, if you don't have blessings then yea its just worse unexpected courage.

Simple, strong but not game breaking.

Zerogrim · 232
Rather than look at it as an Unexpected Courage replacement when there are no Bless tokens about, I think it is more accurate to look at it as a more flexible Guts or Manual Dexterity replacement. OK, you lose the card draw on a successful check, but that seems a reasonable trade for covering both types of checks equally as effectively. — dysartes · 1 1/23/21
0

Previous review was based on wrong rules (my mistake) and edited.

The icon // seems good enough to counter many encounter tests. If you don't believe you'll reveal [bless] during the skill test commiting Beloved, one possible combo is Scrying Mirror. After you reveal bless token, you may commit this card for auto-success.

elkeinkrad · 262
Note that Scrying Mirror performs Step 3 (Reveal Chaos Token) early, but not Step 4 (resolve chaos token effects), so you will have revealed a Bless Token, but you will NOT have revealed any additional tokens yet. While it’s true that if you skill boost with Beloved and draw a bless, you might just succeed anyways, an important advantage of Beoved is that you don’t draw any additional tokens (so you don’t waste other Bless tokens if you have a lot) and the Bless you revealed doesn’t return to the Token pool (so it doesn’t reduce the number of Bless tokens in the bag). — Death by Chocolate · 1015 10/5/20
Thanks to comment @Death by Chocolate! — elkeinkrad · 262 10/22/20