When an investigator at your location resolves a token during a skill test, exhaust Ancient Covenant: Do not reveal another token as part of this token's effect.

Tiziano Baracchi
In Too Deep #122. 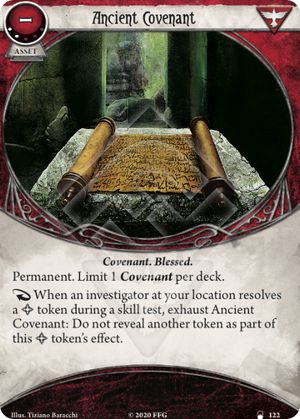 This is the card that is going to open Extreme mode to the masses (like me). It greatly improves the math of the bag. Let me show how!

Here are your odds of passing checks. The first number is with the plain bag, the second is with 5 's, and the third is with 5 's AND Ancient Covenant.

What's the takeaway? If you are already well up on a test (say a +4), Ancient Covenant gives you a bit of cushion but not much. You'll probably pass anyway, and if you draw a , you're even more likely to pass, because by then you're +6. But if you're starting up just one? Even after that pull, there's still plenty that can sink you. Ancient Covenant gives you a fighting chance at checks that in Extreme mode are usually long shots.

Sacred Covenant also helps you keep more 's in the bag. How? By cutting down on the frequency with which you draw multiple 's in one check.

This may be jumping the gun a little bit, but there's a new card coming out in the Lair of Dagon called Favor of the Sun (not yet up on arkhamdb but announced by FF). That card allows you to seal three bless tokens and draw them during any check instead of something from the bag. Combined with Ancient Covenant, that effect is INSANELY powerful, especially on higher difficulties. It allows you to auto-succeed in the most scandalous way. You can be two DOWN on a check, and pass it without modifying it a bit. How good is that? Let's see:

Pnakotic Manuscripts allows you to avoid pulling tokens on three tests, guaranteeing success as long as you're skill value is even with the difficulty. It costs 5xp, 5 resources, and takes up a hand slot. It also costs an action to play and an additional action every time you use it, unless the test was during a revelation effect.

Favor of the Sun + Ancient Covenant also guarantees success on three tests, but you can be down as much as two. The combo costs 3xp, 2 resources, and takes up no slot at all. And it costs no actions, not even to play, because for some reason Favor of the Sun is fast!

This combo opens up a lot of new strategies for Extreme mode. Of course, Favor of the Sun is max two cards, so you'll want to use other Extreme strats as well: automatic clues and damage whenever possible, fail-forward options. But now you don't have to fear checks quite so much. A card like Pilfer, which seems crazy to run when there's a -6 and a -8 waiting for you, now could have a spot in your deck.

So, if you've been eyeing Extreme mode for a while but haven't had the courage to take the plunge, come on in: the water's warm!

As a card on it's own it's great. A 2xp permanent with pure upside is unlikely to be bad. As long as you have some bless token generation in your team pulling one during a test will almost always result in a success and you'll never need to use up more bless tokens than necessary.

However, alongside Favor of the Sun this card becomes game breaking.

With a single fast action and +1 resource play of Favor of the Sun you get 3 turns with a guaranteed +2 skill test.

This is a hugely powerful affect, +2 should usually translate into an auto success for most attempted skill tests. However, even if +2 isn't enough you'll know exactly how much you'll need to boost/commit.

It's also immensely flexible. You can pick the exact tests you want to succeed and the test doesn't even have to be on your turn:

and also the neutral:

This combo is incredibly easy to pull off and requires no slots or build around, 2 x Tempt Fate is more than enough to keep the chaos bag stuffed full of bless tokens. With some reasonable card draw you can keep up Favor of the Sun the entire game.

I've play tested this in Preston Fairmont and it's degenerate and triviliazes the game even at expert difficulty. Comboed with the success / over succeed mechanics in Rogue this effect is far too powerful. While occasionally being able to cheat the bag is fun, being able to reliably do it once every turn takes away a lot of what makes Arkham the experience it is (the chance of drawing the ).

Rogue is the most able to abuse this with big all in plays, see my Preston - The Favoured Sun Over Succeeds deck for an example of what's possible.

Survivor is the only class that has a somewhat hard time abusing it and even then it's way overtuned. I would suggest that Ancient Covenant needs to be tabooed to only be usable on natural bless token draws from the chaos bag.

Between this and A Watchful Peace I think the Innsmouth playtesters forgot to turn up to the Survivor balance meeting!

bobblenator · 340
It can even affect other investigators at your location, too. So you can run Winifred with Favor of the Sun and Sawn-off Shotgun and partner up with any survivor. — OrionJA · 1 4/29/21
2

This seems extremely good, as long as you have some way of getting Bless tokens into the bag. It’s potentially one auto success per Round as long as you can pack the bag with good stuff. And, as a Permanent and no slot requirement, what do you have to lose?

Obviously, this is dependent on how easy it is for Survivors to get bless tokens in the Bag.

LivefromBenefitSt · 910
Survivors do not need to be the ones getting blesses into the bag... they can pair with Sister Mary or any other player able to get tokens into the bag. — FBones · 15657 10/4/20
Father Mateo just get better and better. — rexhaha · 1 10/13/20
Well, you got 2XP to lose, but as a permanent it's guaranteed. Feels like it's best in 3+ player games; more likely to trigger. — fiatluxia · 50 11/8/20
But if you are drawing a bless token you are pretty likely to be succeeding at that test anyway (depending on how many bless/curse token are in the bag). It's main advantage is that it stops you drawing loads of bless tokens for one test and it's good for investigators who want to succeed by high numbers, eg Rogues. — EnglishLord · 1 11/9/20
@EnglishLord. Drawing a bless token will not be "pretty likely to succeeding" in forced tests against your lower stats, like that ones from treachery cards. I think those tests that would be the better cases for this card. — Venti · 1 11/16/20
I'm running this in a Stella deck teamed up w/ a Father Matteo who leans hard into the Blessed token tech (and has the Sacred Covenant), and it's been great. — KillerShrike · 1 12/20/20
I agree with EnglishLord, this probably does nothing most of the time. An extra +2 should make you suceed even on a test where you're +0. So it saves blesses on a potential double bless pull. — Nils · 1 1/31/21