When an investigator at your location would perform a skill test during a revelation effect, spend 1 secret: Do not reveal chaos tokens for that test.

Spend 1 secret: Choose an investigator at your location. Do not reveal chaos tokens for the next skill test that investigator performs this round. 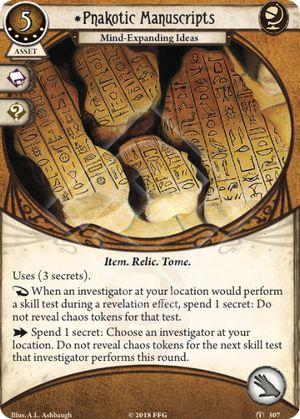 It felt like the community went pretty bonkers over this card when it came out. I've been using it most of the way through Carcosa so here's my thoughts.

It costs a lot of XP and a lot of money, and you'll maybe want two copies to make sure you get actually it at a useful time. You might feel it needs even more support too in the way of cards to add more secrets on to it, so that's even more slots/resources/xp ploughed into it. This adds up to a lot so it better be pretty damn good.

Basically, it's not been as good as I hoped.

Maybe it's the investigator party mix that's the issue, but I'm Daisy Walker which seems like the intended user. Maybe it's that running it in Carcosa isn't so good. Maybe running it with only two investigators is the problem due to not always being at the same place as another investigator. Who knows?

What tends to happen is that first it requires a lot of saving up if I don't have Dr. Milan Christopher out, which is already annoying. Then I get it on the table and then it sits there waiting for a good opportunity that only seldom comes. The reaction to encounters seems great, but then there's lots of reason it's not useful:

The secrets can sit on the card unused for a while. I find similar things can happen with cards like Ward of Protection and Forewarned which I have also been using, where using the card is just as bad as the potential penalty from the encounter, or it's an enemy so you can't use it - these cards are great and powerful but sometimes can wait a long time for the right opportunity. Pnakotic Manuscripts has been falling into the same category for me.

The other ability this card has does have it uses and has been used to good effect, but the times where you would like to use it are often problematic:

Now, it is good when combo'd with risky things like the Old Hunting Rifle. It's great for that stuff for sure; however, we've been managing the campaign pretty fine without using that card for a while now. I haven't tried it with things like Lightning Gun etc., but it's probably less great for them as you get so much combat boost that's it's often not really necessary. From reading around it has potential for those all-or-nothing plays that Rogue decks sometimes have and that's probably got some legs. However, in that use case you're waiting for even more stars to align than just everyday usage which is already a bit problematic so you may only get that working a couple times in the whole campaign.

So yeah, in my opinion based on current plays it's basically a lot more situational than it appears. This doesn't make it terrible, but costing 5XP and 5 resources is a very high price to pay for it and I'm not entirely convinced it's worth it.

PS: not sure if anyone else felt like this, but this card also weirdly makes the game less fun too, which is not something I expected. If you remove key pulls from the bag from big moments in the game you have these super plays that have no risk. As a result they can be less exciting; Arkham is all about that chaos bag.

Octo · 81
I had almost the same experience with this card and agree: this card isn't good. It is only useful for big multiplayer combos like an attack using double or nothing. "Mind over matter" can help you pass agility tests and "Premonition" can help you to pull those muliplayer combos...at 0 XP, without having to pay 5 resources and at fast speed. — Alogon · 912 3/22/19
Could be really great in a Rex Murphy Burglary/Scavenging deck with Dr. Milan and Crack the Case, he could have the economy to play it again and again — mogwen · 250 3/23/19
The expense wasn't a problem so long as I had Dr. Milan out. My experience was not that it was unaffordable, but that it in the end wasn't that useful. — Octo · 81 3/23/19
YMMV, but the Daisy in my playgroup, which was 3-4 people, ran this during our run of Forgotten Age, and he got it most games after he bought it. I don't think he emptied it all the time, rather, he used it to make sure people passed tests that were close and that they needed to pass, or where there was a price you had to pay to take them. It worked like a Will to Survive, but more spread out. Was it The Best Thing Ever? No. Were we very glad to have it? Yes. Yes we were. — Schielman · 31 4/9/19
Could help lower the risk of a big Deciphered Reality power play. Not sure if that's a good thing to be building your deck around, mind you. — Zinjanthropus · 213 2/22/20
This is a fine exp sink in a deck featuring Dr. Elli Horowitz, although it's a feel bad if you draw it instead of having Elli pay for it. I feel like it's it's a more natural Ursula card than a Daisy card for that reason. I found myself using the reaction ability without ever really considering the action ability, so Daisy's free action wasn't something I missed here. — BoozySquid · 8 3/5/20
1

As one of the most expensive seeker cards, this might be worth a second look with the release of eldritch sophist. It’s a pricey combo, so it might be worth adding Dr. Horowitz to the mix (which can trigger astonishing revelations to pay for combo pieces). But with the sophist, and cheap secret containers like the encyclopedia(0), you can prevent the encounter deck or must pass checks. But if you absolutely need to pass checks every turn, it might be worth just buying Jaqueline Fine, getting the scrying mirror, or Sun's Favor. Five XP and five resources is extremely expensive.

MrGoldbee · 1315
Check out Ariadne's Twine. Would this card be much more powerful of you could trigger it an unlimited amount of times at the cost of one resource? Seems like a better deal than Higher Education. — Taevus · 534 3/7/21