Fast. Play after a location enters play or is revealed during an investigator's turn.

Until the end of the active investigator's turn, that location gets -1 shroud. You may move 1 clue to that location from any other location. 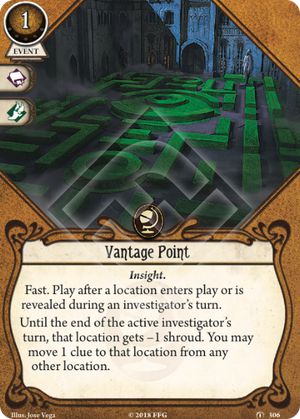 Luke Robinson loves this card. In conjunction with his Gate Box/Dream-Gate, it functions essentially as a second version of Working a Hunch, except that it's one resource cheaper and can grab a clue from literally any revealed location.

ClownShoes · 4
I might be missing something here, and Luke's ability is kind of complex to think about, but I'm not sure I follow how this becomes Working a Hunch. Would you mine going through the process in depth? — StyxTBeuford · 632 10/1/19
Nevermind, I see it now. Put Dream Gate in play, move a Clue to it from anywhere, it gets -1 Shroud so it's almost guaranteed to succeed if you investigate it. That's very neat. — StyxTBeuford · 632 10/1/19
You'll still need an action to investigate, which Working a Hunch doesn't, but yes, this combo is neat. — TheNameWasTaken · 3 10/1/19
I think overall I'd rather have Working a Hunch. more expensive, but it doesn't require me to use a charge on the Gate Box if I don't want to and it's fast. However if I want more easy clues outside of Hunch and Drawn to the Flame, this could be the next item on the list. Definitely worth checking out. You'll retreat to Dream Gate at some point, so you might as well get a clue while you're at it. — StyxTBeuford · 632 10/1/19
Would it remain there if you're not at the Dream Gate ? — Sassenach · 59 10/1/19
@Sassenach: The Dream-Gate leaves play at the end of the investigation phase, taking the clue with it, and Luke is the only investigator who can enter the Dream-Gate. So you'll want to grab the clue with him as soon as you play Vantage Point. — ClownShoes · 4 10/1/19
Yeah, I thought so. I think I just misread what Styx was saying though and assumed he meant that you could move the clue there and then grab it whenever is convenient. — Sassenach · 59 10/1/19
Of course, the fact that the clue disappears along with the Dream Gate means that this tactic is not devoid of risk. If you have a particularly unlucky couple of pulls on your investigate checks you could be removing a clue entirely from the game. — Sassenach · 59 10/1/19
Yeah I meant investigate it on the same turn, which you would want to do anyway as Shroud is 0. But yes, let's not have a clue fizzle out of existence if we can avoid it. If you can get three pulls, it's a very high chance at least one of those isn't autofail. — StyxTBeuford · 632 10/1/19
There are usually more clues, than you need in a scenario, so not to have to grab a clue for that Victory point is also neat — Adny · 1 10/2/19
There are also scenarios that only care about emptying locations but not where the clues go (e.g. Essex County Express), in which case you don't even need to spend an action to get the clue. — ak45 · 69 10/3/19
2

Long range clue manipulation is the new game in town. The suite includes cards such as Connect the Dots and Intel Report and while it's still all dependent on incidental Jank, it actually works.

Regardless of character, you can skootch a clue off of a location that you don't want to return to or onto an easier spot, or elsewise you might use it to "finish" a location for XP or a scenario requirement. There is also one colossal moving force in the strength/weakness of Vantage Point, player count. Depending on your other card choices you may be so and so able to pick up clues in a count of 2's or 3's, this is where multi clue cards and cards like Intel Report and Connect the Dots come in.

In 2 player you can play Intel Report or Connect the Dots to clean up a location completely, in 3 player you might move the clue from a 3-clue location and get the other two as mentioned before (style points for using Vantage Point to enable playing Connect the Dots).

Make note of the precise text on Vantage Point, you can play the card when a location is revealed, but also when a location enters play, this little extra window of use might be helpful in certain scenarios.

All in all the card is not particularly strong, moving a clue is an ancillary benefit, barely worth a slot on most characters. A primary clue gatherer in a large party might consider it to enhance their ability to react to clues all over the map via Connect the Dots or an Ursula Downs or "Ashcan" Pete who can move the clue, use the shroud reduction and pick up the moved clue in a flurry of investigation.

Now, you can obviously use this card to lower the shroud of a location and make it easier to investigate for a turn, but I don't think that's terribly relevant. Why? Because, except for a few corner cases where people have extra actions, you are, at best, going to get two investigations with -1 shroud.

I think the best use of this card you are going to regularly get to use is taking clues from locations you don't want them and moving them somewhere else. And I don't just mean from high shroud locations. Some locations inflict a penalty for trying to move on to them or for trying to investigate on them. And I can think of three locations from that scenario alone that would fit the above description.

But the times you will be most proud of yourself will be the times when you spent one resource and net your team a victory point.

Schielman · 6
This event can save a lot of move actions if there’s a lone clue at the other side of the map. This card had interesting interactions with the rougarou scenario. — Django · 2150 11/29/18
That's pretty much how I like using it: net a free VP from a painful location (such as spend 3 resources to investigate. Yar!) — Razoupaf · 1 12/3/18
0

This card is like half a flashlight that is much less flexible ("during an investigator's turn" is the important part). The second effect may sometimes be useful but I don't think I'll ever include 2 copies of this unless I know that the scenario will be adding locations as I go (e.g. Forgotten Age).

jmmeye3 · 209
I don't know if it's quite that bad; it's cheap, fast, and can be played when a location is revealed (turned face-up), which happens a lot in every scenario, in every campaign. I think its biggest limiter is that an investigator needs to take the action to reveal/put into play the location, so you're only getting a full turn of buffed investigations if you have free investigates (Ursula) or free moves (pathfinder/shortcut). — SGPrometheus · 175 1/6/19